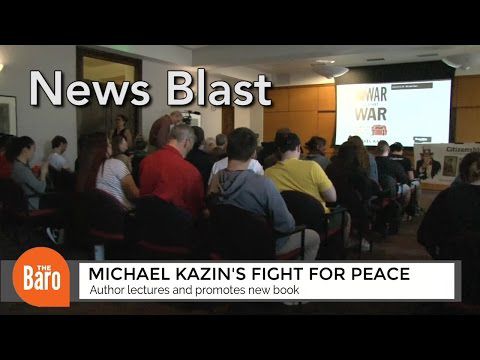 Tuesday, in the Memorial Union Journey room, Kazin lectured on his past opportunities and promoted his new book War Against War: The American Fight for Peace. In his lecture, Kazin explained his anti-war stance.

“I want people to pay attention to a war that was very important in the United States and world history,” Kazin said. “And to people who oppose the war in a way that needs to be understood better and respected. I think admired as well.”

Christopher McKnight Nichols, an associate professor of history at Oregon State, director of the Center for the Humanities and head of the Citizenship and Crisis Initiative, which sponsored Kazin’s lecture, thought that Kazin would be a perfect fit for his series of lectures this quarter.

“There was a lot of anti-war opposition. It is a good perspective to bring to our audiences that are thinking of contemporary events and the U.S.’s role in the world, but also to bring a great historian to campus and a former activist and the editor of a major magazine,” Nichols said.

Nichols discusses what students should get from the big picture of Tuesday’s talk.

“There are historical precedents for lot of the things we are encountering today,” Nichols said. “Sometimes in the popular media or in national discourse we hear that something is unprecedented and that isn’t often challenged as much. So if you have scholars coming through to talk about what happened in the past, we can make better informed decisions of the present.”

Natalia Bueno, a public information representative in the School of History, Philosophy and Religion, handles logistics for all the events that go through the school and worked behind the scenes for Tuesday’s event. Bueno had previously seen Kazin’s work, including on PBS, so she was looking forward attending the lecture, and encouraged students to do the same.

“They should go to more events so they can be exposed to all these great speakers, it’s definitely a lot of work and we try hard to expose students to things that can impact them in their lives in terms of history,” Bueno said.