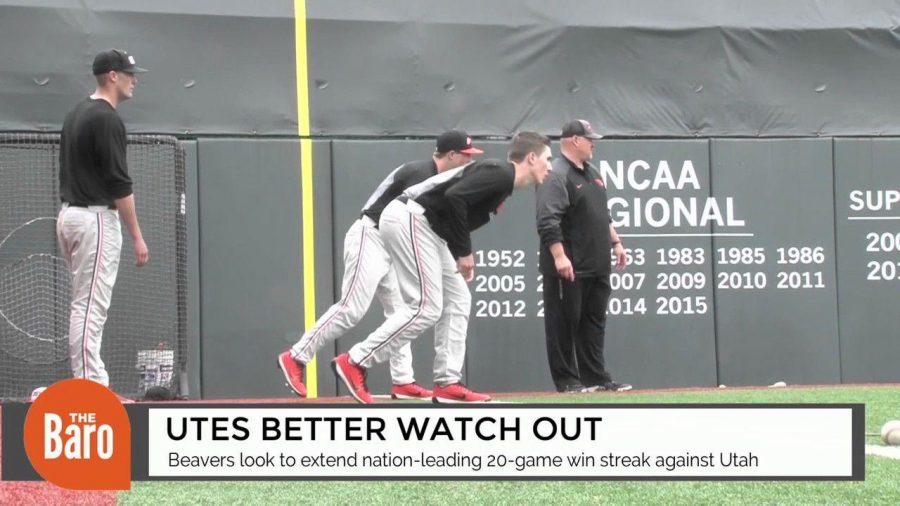 Luke Heimlich knows it. Beaver Nation knows it. Everyone knows it: the Beavers are the hottest team in college baseball.

“It’s a lot of fun when things are clicking,” Heimlich said. “We knew all offseason we had a lot of talent, a lot of potential, so to kinda come out and start the season with all wheels turning and all gears clicking the way they have been, it’s been fun to be in the middle of it.”

Heimlich leads the team in innings pitched with 52, while posting a 0.52 ERA so far this season. He credits much of his success to the stellar defense behind him, namely sophomore shortstop Nick Madrigal and sophomore second baseman Cadyn Grenier.

“There’s no better feeling than knowing those guys are playing defense behind you,” Heimlich said. “I’ve had some good players play behind me, but there’s nothing like these two guys. Their level of play is ridiculous.”

Freshman left-hander Jake Mulholland, who has posted 22.1 scoreless relief innings this season, echoed the words of the veteran pitcher.

“Knowing that everyone on defense is working for you, knowing that they got your back, that’s a great feeling,” Mulholland said.

Heimlich has also been a mentor to the younger Mulholland. With a staff including sophomore Bryce Fehmel, redshirt junior Jake Thompson and redshirt sophomore Drew Rasmussen, the freshman has a lot of experience to learn from.

“(That’s) one thing that’s nice is being able to rely on those older guys,” Mulholland said. ”They give me the best advice they can, those guys are great.”

Heimlich also attributed his past mentors, including Andrew Moore, for making him a better leader, as well as Mulholland for taking the initiative to improve his skills.

“I wanted to kind of help the younger guys, and he did a good job starting the conversation,” Heimlich said. “(He started) asking what he needed to do to be successful.”

While experiencing all this success, the Beavers have been in a  school-record winning streak. This doesn’t seem to affect the pitching staff, especially Mulholland.

“That streak is going to come to an end sometime, but I’m just worried about throwing my next pitch, next inning and not worrying about anything else,” he said.

Mulholland’s attitude stems from having a seasoned pitching staff who helps him stay focused on his game. Head coach Pat Casey also notices the effects players taking a leadership role has on the team.

“You gotta have good leadership, no matter what it is, and we got good leaders on the field,” Casey said.

Good leaders on and off the field are propelling a team that is tearing through Pac-12 play so far. However, the Beavers intend to stay focused on moving forward.

“It’s fun being ranked at the top and having all the success, but every day when you show up, you have to get better at practice,” Heimlich explained. “When you show up to a game, your goal is to ultimately win the game, no matter who the opponent is.”

The Beavers will face Utah this week at home for a three-game Pac-12 series. First pitch Friday is set for 5:35 p.m. at Goss Stadium.