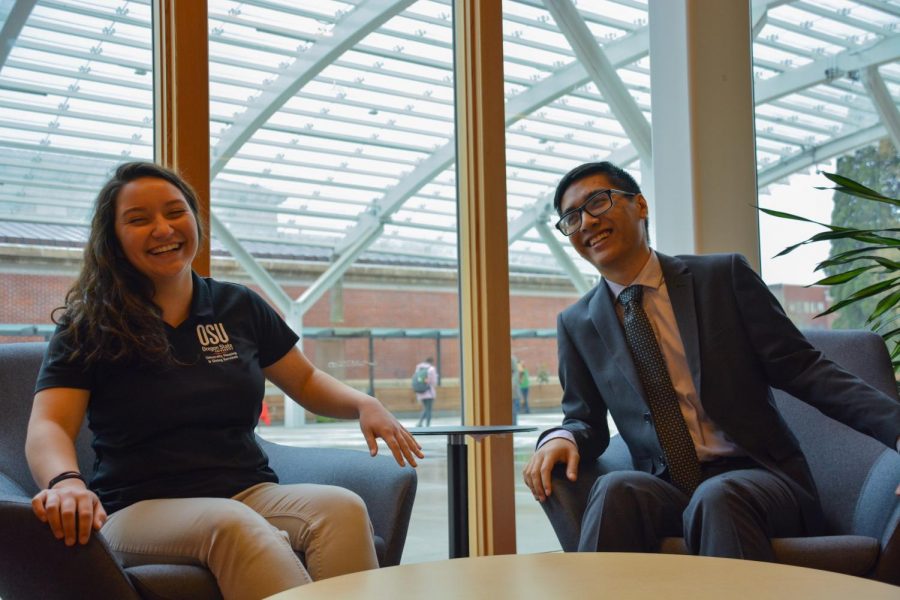 Baum (left) and Trinidad (right) laugh while sitting inside of the Student Experience Center. As CRFs, they host workshops and events inside residence halls to create discussion.

Around 4 a.m. one morning during his senior year of high school, Marcus Trinidad saw flashing red, white and blue lights in his rearview mirror. He was pulled over for crossing the median and his car was searched by the police officer. He remembers feeling that the police treated him unfairly for a minor offense because of his race.

“I felt like ‘what does (searching my car) have to do with touching the line?’ But I didn’t feel like this was to the time to comply with the police. Police are supposed to serve and protect but who are they serving and protecting?” Trinidad said.

“I felt like it was because I was a brown kid wearing a hood at four in the morning,” Trinidad added. “Cops think that I must be doing something, they must think something is up. Then I realized that maybe this is something I can address. It’s something that resonated with me for a long time. When it happens to you, you start to feel like things are working against you.”

Today Trinidad works in Finley Hall operating as a community relations facilitator. CRFs like Trinidad work alongside Residence Assistants and Academic Learning Assistants in residence halls, but do a job unlike the RAs.

The day he was pulled over he felt discriminated against. And Trinidad wanted to help others who had similar experiences. This was a watershed moment for Trinidad. This was his “Batman story,” as he called it, a reference to a moment that could turn Bruce Wayne into Batman. He knew at that moment that he wanted to stop injustice in the world. It is part of the reason he decided to become a CRF.

According to the Coordinator of Diversity Initiatives and Programs Brandi Douglas, the main job of a CRF is to foster inclusivity and put on inclusive events for residents.

“The program has grown since then and in fall term 2015 we began our current model of 14 CRFs,” Douglas said.

The 14 current CRFs work to create an inclusive environment, according to Manager of Marketing and Communications Jennifer Rouse.

“The CRF position was created as a peer education role to work with student staff and leaders in promoting inclusive and welcoming environments in the residence halls,” Rouse said.

According to Rouse, if conflicts arise within the residence halls it is the CRFs job to do something about it.

“As live-in staff members and state employees, CRFs have some similar responsibilities, such as being mandatory reporters and reporting bias incidents,” Rouse said.

Trinidad was not the only CRF who felt drawn to his work as a CRF. Sofia Baum, a CRF for Polling Hall, had a similar “Batman story.” Although Baum says she felt discrimination all her life, she also has one moment that stood out to her.

“My experiences being two marginalized identities, I’m Mexican and Jewish in a very white community, made it very interesting for me. It was always coming at me from all different sides. Maybe my Batman story was… I had a run-in with a white supremacist when I was 13. So that was pretty scary; it’s a super vulnerable feeling,” Baum said.

That vulnerable feeling made Baum want to help build a community where inclusivity is valued. Trinidad also emphasized that their role is to create such a community. This is the type of community that Baum said she found when she first came to OSU.

“I know I became a CRF because I had two really good friends, one was a CRF, who were influential in my life because they were always connecting me with resources or offering themselves as resources,” Baum said.

This is the type of resource Baum wanted to be for her fellow students regardless of their beliefs.

“We might not have the same ideology, politics, ideas about civil rights and women’s rights, but creating space where we can hear each other out is a piece of what we do,” Baum said.

Both Baum and Trinidad are very passionate about social justice and their jobs.

“To be passionate about social justice is kind of a requirement, but also you need to be very empathetic,” Baum said.

There are also challenges that both Baum and Trinidad experience. Trinidad faces stereotypes about social-justice work through his position as a CRF.

“I think there’s a lot of stereotypes and misconceptions when you think about social justice, some people say like social-justice (workers) are keyboard warriors or when you see the term snowflake, all this can put you in a vulnerable position sometimes,” Trinidad said.

The term snowflake is used to describe millennials, meaning that they are delicate when it comes to social-justice issues. However, Trinidad doesn’t agree with that description.

“One person told me, even if they are calling us snowflakes, then yes one person maybe a snowflake, but together we’re an avalanche,” Trinidad said.

The CRFs do various workshops, public speaking and hall events as part of their work in the residence halls. As part of dealing with social-justice issues, the CRFs say they do talk to residents individually.

“To facilitate discourse, discussion and dialogues where we kind of bring the ideas together of what it means to live in inclusive environments, we had one fall term that was about politics and social justice,” Trinidad said.

According to Trinidad, a few workshops and bulletin boards created by CRFs have caused controversy among residents, which has been a challenge.

“As far as being controversial I think it’s about starting a dialogue. That’s how we are trying to approach it. We are not trying to attack people. What our position entails is offering space, education and opportunities to engage in dialogue about why did white supremacy win the U.S. election, or why did the Muslim ban happen,” Baum said.

However, Baum acknowledges that these topics might be very impactful to certain students and they cannot be ignored, especially by CRFs.

“But at the same time it is a very, very real part of our political climate right now and our experiences as students or students of color or LGBTQ+ students on campus and we can’t turn a blind eye to it,” Baum added.

Baum’s words were echoed by Trinidad, who felt it’s important to be transparent as a CRF.

“This job comes with wearing your politics and your values on your sleeve, part of our job is being a mentorship and empowering students and that mentor relationship looks different for each individual,” Trinidad said.

More information about CRFs or how to apply can be found on the University Housing and Dining Services webpage.