Finding the link between suicide and RSD 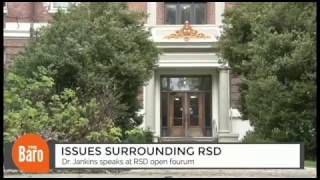 Rate the pain from one to ten. For those who are afflicted with Reflex Sympathetic Dystrophy (RSD), that answer might be a level ten.

Last week Dr. Stephanie Jenkins, assistant professor of philosophy presented her work at an informal open forum discussing the effects of RSD. RSD is a former name which is being used in Dr. Jenkins’ research to reflect the terminology commonly used within the advocacy and community who are involved or affected by the disease.

The disease is medically and formally recognised as Complex Regional Pain Syndrome (CRP). People who suffer from RSD reported it as a chronic burning pain sensation that generally will be around the arms and legs, it is being coined as the Suicide Pain or a living hell for those who are suffering from the disease because there appears to be a relationship between suicides and RSD, though no empirical data has been recorded.

Dr. Jenkins discusses the lives of those affected with RSD and the political and social problems surrounding the issue. Although RSD is medically recognised, doctors might not be familiar with the disease, and because there are stereotypes of people “in pain” wanting medication, doctors might not be able to give proper quality of care for patients with RSD. Another social issue discussed at the event is that friends and family members might have skepticism regarding the intensity of pain and will see their loved one using the pain as an excuse to get out of doing work.

In an online questionnaire that Dr. Jenkins conducted, many people describe the disease as a continuous burning sensation that on good days, they can be a “normal” functioning human being, on other days, they couldn’t leave their couch or beds and are unable to concentrate or work due to the pain. At worst, they are helpless or feel as a burden to their loved ones.

Dr. Jenkins has been working eight years  on this research project, she now aims to continue this research into the correlation between suicide and RSD, due to the lack of empirical data research. She discusses her difficulty finding any research regarding suicides and RSD patients and reaches out via disabilities studies listserv to see if anyone else was ware of any research.

“I didn’t get a reply saying ‘here’s a bibliography’, what I got was a co-researcher and friend,” Jenkins said “It’s developed into a very rich, supportive and intellectually stimulating relationship. So right now we’re exploring, doing a study that is more directly focus on the relationship between RSD and suicide. Because it wasn’t something that we explicitly asked about in the first iteration.

For Philosophy Student Lana Klipfel, who was present during the meeting, explained that these types of discussions are extremely important.

“I think it’s really important to be aware of struggles like this. In particular understanding what the community is doing in terms of disabilities, given that people and students and faculty maybe struggling with that. I’m curious about the administrative part working together as a community. I think it’s so important and also being able have a voice for those that are in pain.” Klipfel said.

Associate Robert Figueroa explains one cause of those who commit suicide could be through this idea of self-abandonment; where not only have their doctors, friends and family abandoned them, but the RSD patient themselves.

“I wonder if it’s worth reiterating through self-abandonment, so there is this wish to not be you any longer, which is not as easy to pin on social or accessibility or other things but just that reflexive thing of that ‘I’m not who I was and I don’t know who I am, I don’t want to be this. I don’t even know if I want to be the person I would become if I didn’t have this,” Figueroa “It’s a way of pitching a suicide in a way that says, yeah, everyone is talking about suicide, but what are they talking about? They’re telling you that empirically proven, but maybe what they’re talking about is this self-abandonment, it’s like if everyone else has abandoned me I am left with nothing but pain I am no longer me, I’m no longer able to tap into who I am or who I used to be in the world.”