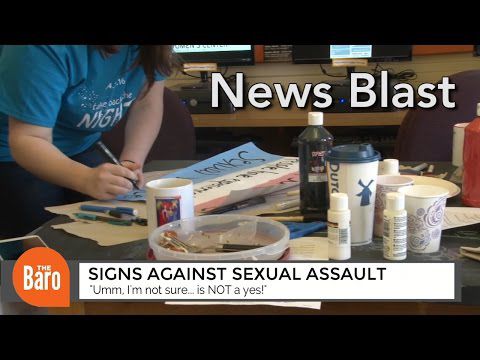 In preparation for Thursday evening’s Take Back the Night event, the Women’s Center hosted a space for students to come in and create posters and other visual representations for how they feel and the message that they want to spread regarding sexual assault prevention.

The Women’s Center has coordinated all of the events for Sexual Assault Awareness Month this year.

Second-year women, gender and sexuality studies student Miriam Wojtas attended Take Back the Night last year, after hearing about it through campus advertising.

“I knew that that would be a good and healing and important space for me to be present in, so I already knew that it was coming this year. I am more enthusiastic about it because now I have very supportive people who are actively involved with it,” Wojtas said.

Fourth-year student Julie Cooper, double majoring in English and women, gender and sexuality studies, describes the purpose of making the posters for this event.

“(The purpose of making poster is) to increase the visibility during the march for Take Back the Night. Folks will be holding signs as we march and it just gives another way of interacting with the message that everyone will be sharing during the event and march,” Cooper said.

The Women’s Center provided statistics to write on the posters for the students as well.

Fourth-year anthropology student Andrea Hollopeter discusses the types of signs she made.

“There were a lot of statistics laid out here about LGBTQ statistics, especially what trans folk face throughout their lifetime. Some people will use that, which is great, some people might even make a poster based off of their own experiences to advocate what they have gone through,” Hollopeter added.

Cooper believes the biggest message that is trying to be communicated for Take Back the Night is raising awareness for the statistics of sexual assault and sexual violence and intimate partner violence that people all around the world of different identities face.

“Anything less than yes is a no. That is not something that people really understand. It is a really important issue to talk about. Especially when it comes to marginalized groups it is not talked about as much as it should be. People don’t really think about it,” Hollopeter said.

“Take Back the Night is a lot. Any kind of march or movement or protest or organized gathering of people is a lot to take in and I think when you have this additional way to commit yourself to it and express yourself within that space, it just feels like you bring more people in,” Wojtas added.

Take Back the Night takes place tonight, April 27, outside the Student Experience Center at 7:30 p.m.