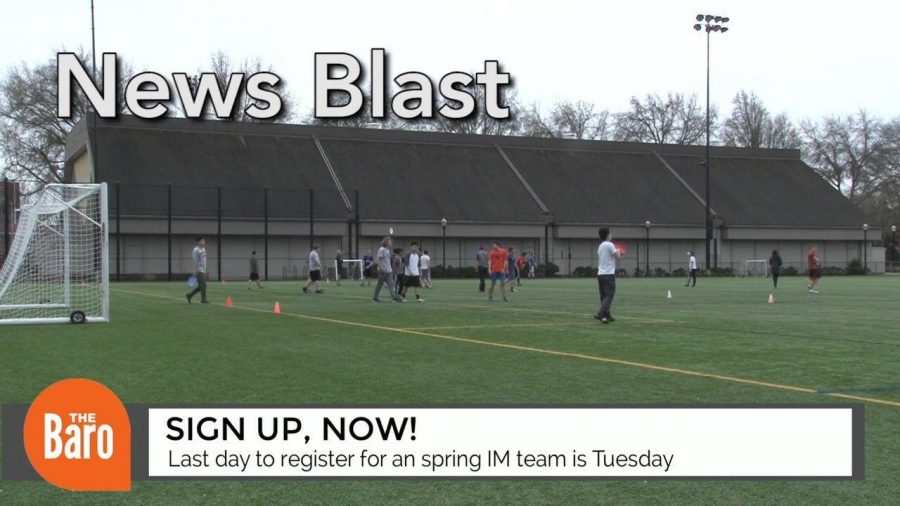 Freshman Taylor Betz is participating in spring intramural sports for the first time: she has signed up to play softball along with girls from her sorority.

“I played softball for about 12 years, so I thought it would be a great experience to continue to play and meet new people,” Betz, a freshman business major, said.

Registration is open for soccer and softball until Tuesday at 8:30 p.m. Sam Rodenberg, sports program coordinator at Dixon Recreation Center, explained the process of signing up and the regulations governing participation.

According to Rodenberg, no experience is necessary to participate in any intramural league or special event. Anyone can join regardless of skill in any sport and a spot on a team is guaranteed.

Rodenburg explains that the bigger intramural leagues have ‘A’ and ‘B’ leagues. Regardless, the season consists of five weeks of games and one game a week per team. After the fifth week, the ‘A’ league will continue into playoffs and have a chance at the championship game.

“The ‘A’ League consists of more competitive players. The first five weeks of ‘A’ league consist of regular season play and based off of the results of these games, teams may move into playoffs,” Rodenberg explained. “B league is more for recreational players.”

If a student does not have a team already planned for the term, they can sign up as a free agent according to Rodenberg. The link to sign up can be found here.

Rodenberg explains that the cost per team is different depending on the sport. For example, softball and soccer have a fee of $55 per team, Ultimate Frisbee and Team Tennis are $50 and wheelchair basketball, 5K run/walk, disk golf, sand volleyball, pickle ball and the track are free.

It is the team’s preference whether or not they choose to practice before a game Rosenberg explained. Jenny Vorvick, a senior majoring in speech communications, explained that she played volleyball for two terms and basketball for one term.

“Everyone should play an intramural sport at least once during their college career. It is cheap, a good exercise and can be a great way to spend time with your friends as well as meet new people,” Vorvick explained.