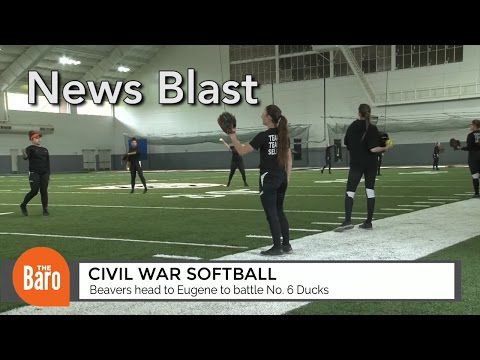 Beavers seek their first win against the Ducks in five years.

This weekend, the Oregon State softball team will make the trek down I-5 in pursuit of their first win against the Oregon Ducks since March 26, 2012.

Redshirt senior infielder Natalie Hampton is set to play in her fifth Civil War this weekend and knows the importance of the Civil War tradition.

“It’s always a good series, a good battle, always a big crowd,” Hampton said. “There’s always a little something extra that goes into the Civil War. I’m feeling good. I think the team is peaking at the right time. I think we’re ready.”

Coach Laura Berg is hoping to take her team down to Eugene to steal the Civil War series.

“I think they know with the Civil War what it means,” Berg said. “I think there’s a bit of energy, momentum and grit. We haven’t beat them yet in the last four or five years. None of these guys on this team have experienced a win against them and so I think they’re eager for it. I think they’re thirsty for it.”

Redshirt senior infielder Sammi Noland is focused on the Ducks, but not on their ranking.

“What’s been so successful for us this year is not focusing on other teams’ (rankings) and who they have,” Noland said. “They are ranked but I think we’re going to focus on what we need to do.”

“I think we do a good job of focusing on ourselves,” Hampton said. “What we need to do vs what they’re doing and I think if we keep doing that then we’re going to be fine.”

Coach Laura Berg believes her team can compete against the Ducks this weekend.

“With Oregon being ranked as highly as they are, obviously they’re very good,” Berg said. “I think we can get a win. I think if we play well we can take the series from them.”

If the Beavers win this weekend, it would be Coach Laura Berg’s first win against the Ducks as a head coach of the Beavers. Berg is eager for the win, but is focused on her players.

“If that doesn’t give you a little extra motivation, I don’t know what will,” Hampton said. “Coach Berg deserves it. She’s gotten us to where we are and she deserves that win. We’re going to do everything we can to get it for her.”

Sammi Noland always plays for her coach but will take this weekend as special motivation.

“Every game we want to play for her,” Noland said. “She cares about us so much and is so intense and loves this game. We’re going to try and win it for her.”

Designated hitter Alysha Everett was named Player of the Week on April 17 after totaling seven RBIs in the series win over UCLA.

Natalie Hampton spends a lot of time at practices with Everett and has formed a close bond with her teammate.

“One of the best,” Hampton said. “She’s like my other piece. We bond really well. She’s kind of my go to. I’m kind of her go to. I’m so proud of her and the way she’s performed this year She picks me up when I’m down and I pick her up when she’s down. I just want nothing but the best for her and I’m lucky to have played with her for three years.”

“She’s always been that kind of spark,” Arriola said. “She’s super clutch. I always know she has it and she knows we always have her back no matter what the outcome and I think that’s what makes her so confident out there and so successful. I really appreciate that because she’s such a hard worker.”

First pitch is set for Friday night at 6 p.m. in Eugene.