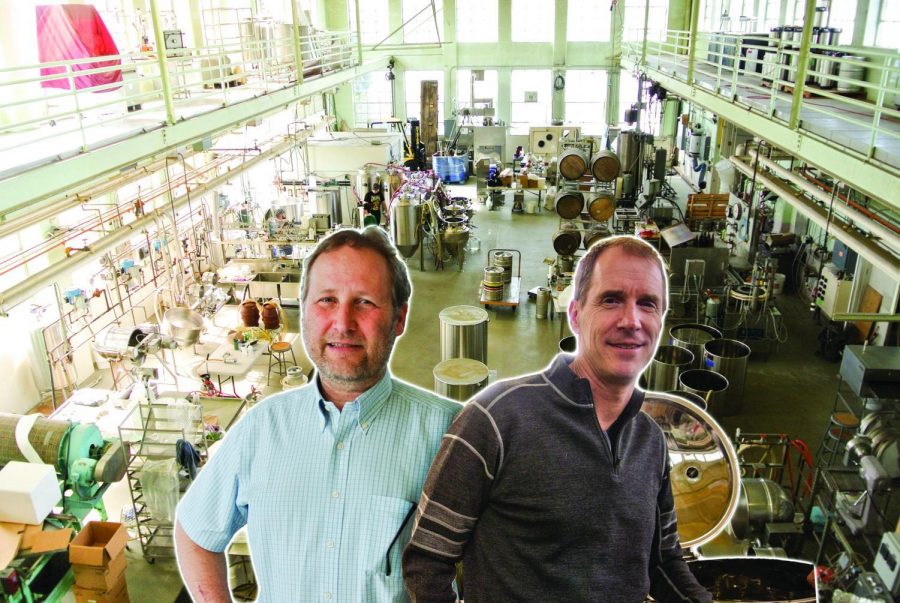 The owners of 2 Towns, Nectar Creek, Corvallis Brewing Supply all support one another

In 2016 there was a total of 5,005 breweries in the U.S., and almost all (99 percent) are independent craft breweries, according to the Brewers Association website.

In the Corvallis community, craft brewers such as 2 Towns and Nectar Creek have been rising in popularity. The community is full of connections, and at the center lies Oregon State University and respected mentors like Joel Rae, owner of the Corvallis Brewing Supply.

OSU is a large factor in the Corvallis brewing community. The university provides a launch-point for research and a network of like-minded peers.

According to Tom Shellhammer, an OSU food science and technology professor, OSU has a long history of brewing and working with the United States Department of Agriculture.

The Cascade Hop was developed right here at OSU with the USDA, and every Cascade beer available today derived from this collaboration.

“The USDA has been brewing hops here since the 1930s,” Shellhammer said.

The brewing/craft-beer craze has been mirrored in student enrollment into OSU’s fermentation program. Craft brewing is popular in Oregon and with the student population in general, according to Shellhammer.

Future fermentors can receive a food science degree in OSU’s college of agriculture, a degree which is built heavily upon chemistry.

According to Shellhammer, the fermentation science option to this degree has steadily increased in popularity over the last 20 years. OSU has needed to supply more staff and labs to keep up with this demand.

“Our food chem labs, which we used to have one, we now have four,” Shellhammer said.

The number of students enrolling has since cooled off. Jeffrey Clawson, the pilot brewery manager and OSU professor, has backed off from recruiting more students in order to keep the enrollment number at a manageable level.

“We’re happy with where we are right now because we can give students the quality education they’re paying for,” Clawson said.

Lee Larson, Dave Takish and Aaron Sarnoff-wood are the founders of 2 Towns Ciderhouse, a local brewery, and both Larson and Takish attended OSU.

Clawson, who was managing the research brewing and food processing plant at the time, remembers Takish as a student. According to Clawson, Takish was always on the hunt for his next fermenting project.

“If I was processing any kind of fruit, he was like a little dog, just jumping up and down going, ‘Hey, do you have anything I can ferment?’” Clawson said.

On occasion, Takish now gives guest lectures at OSU. He also offers internships at 2 Towns to some OSU fermentation students. According to Clawson, he and Takish still have a strong working relationship.

“He will come in and give guest lectures,” Clawson said. “He also has a need for double-checking instrumentation, and we’re constantly sending students over to chat with him.”

Like Takish, Joel Rae, the owner of Corvallis Brewing Supply, has also guest lectured at OSU.

Rae is connected to all the major players in Corvallis’ brewing community, such as Clawson.

Clawson and Rae have been friends for over 20 years. According to Clawson, the two have brewed together, collaborated and shared many a beer.

“I’ve known Joel since he opened his shop up,” Clawson said. “We have a lot of beer in common.”

Shellhammer knows Rae from the Corvallis brew scene. In the past, Rae would come in and talk about homebrewing with Shellhammer’s students.

“He’s come and lectured a few times in my intro classes,” Shellhammer said. “We use him as a source for ingredients and beer for our classes.”

Rae has provided start-up equipment and advice for local craft fermentors such as 2 Towns and Nectar Creek. According to Scott Bugni, the public relations and marketing manager at 2 Towns, the business probably wouldn’t have happened without the mentorship of Rae.

“Lee and Dave used to stop in there, get all their supplies for home brewing,” Bugni said. “If it weren’t for him, definitely, probably wouldn’t be here today.”

Nectar Creek is another local business closely connected to the Corvallis Brewing Supply. Founding brothers Nick and Phillip Lorenz have Rae to thank for providing pivotal startup advice. According to Nick, it was Rae who initially suggested the two try making a session mead, which is a flavorful beer with a low alcohol content.

“Joel just mentioned something to my brother,” Nick said. “It was just like, ‘Oh!’ And so we just really latched onto the idea.”

Transitioning into a session mead aligned better with the brothers’ grand business plan, making their product more approachable to customers. According to Nick, Rae has helped countless others like Nectar Creek and has been a foundational member of this brewing community.

“Joel has been a supporter of craft beer for such a long time, and has been so key to getting so many people on their feet,” Nick said. “The number of breweries that opened in Corvallis, and in really the whole state and country, that started with getting supplies from him, is a pretty big and pretty cool list.”

According to Bugni, the founders of both 2 Towns and Nectar Creek have a long history of friendship and collaboration, calling themselves, “The Home-Brew Crew.” This adds to the web of connections in the Corvallis brewing community.

Growing up in Corvallis, both Larson and the Lorenz brothers went to the same monastery school. Later in life, Phillip and Takish were roommates together when Takish was attending OSU. According to Nick, all the guys would often get together and talk beer.

“We’d just make beer, it’s like what we did for fun,” Nick said. “We’d hang out and brew batches of beer together and geek out about it.”

The two businesses are currently in the same building complex, and Nectar Creek actually took over 2 Towns’ old location. The owners of both places continue to hang out and talk about their latest projects. According to Nick, the intertangle of their relationship has grown deeper.

According to the owners of both Nectar Creek and 2 Towns, the two businesses are thriving in the craft-brew marketplace. Nectar Creek has outgrown its current location and is building a new home base in Philomath.

The overall amount of beer being consumed in the U.S. has stayed consistent, but the market has changed, Shellhammer said. Craft breweries like 2 Towns and Nectar Creek have been steadily taking customers away from big-brand brewers such as Anheuser-Busch. According to Shellhammer, people are switching their interest toward a more local selection.

“So it’s Budweiser to Deschutes, that’s the switch that’s being played out,” Shellhammer said. “The guy who used to drink a 12-pack on a Saturday watching football or basketball is now drinking a 6-pack of Deschutes Fresh Squeezed.”

Shellhammer thinks this shift reflects a change in consumer mindset, especially amongst millennials.

“Millennials tend to be less brand loyal, so millennial beer drinkers pick favorite beers but not favorite brands, and they’re much more open to trying something new,” Shellhammer said.

“There is a movement in food in general for people to buy local,” Clawson said. “I think if you really looked at this it probably correlates with the hipster movement.”

Clawson has been at OSU since the beginning of the fermentation program. He has watched the craft-beer scene explode and implode over the years.