OSU Board of Trustees sets date for tuition meeting 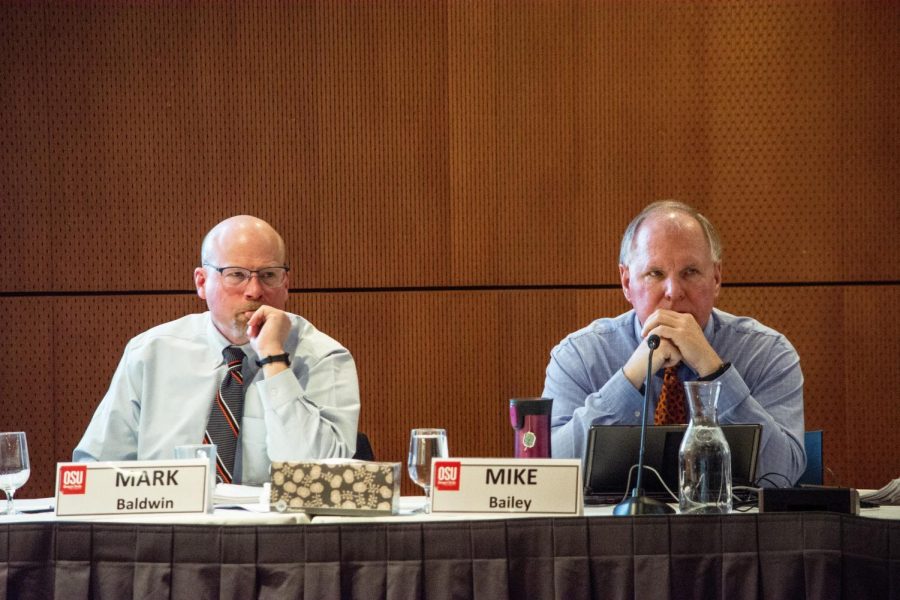 Approximately one month after a March 17 meeting was interrupted by student protesters, the OSU Board of Trustees will meet on April 21 via telephone to finalize budget and tuition questions left unanswered at the earlier meeting.

“The Board will be finishing the business from the March meeting,” said Director of Budget and Fiscal Planning Sherman Bloomer in an email. “The Trustees didn’t have a chance to have their discussion on the tuition scenarios or the recommendation from the Finance and Administration Committee, so I’m sure that will be a major part of the meeting.”

Debbie Colbert, the Secretary of the Board, explained why this specific date was selected.

“The goal is to complete work carried over from the March 17 meeting, including deliberation and action on tuition,” Colbert said in an email. “The April 21 date was selected since it worked best for the majority of trustees and key presenters. This date also does not conflict with key times in the academic calendar such as spring break or final exams.”

Colbert and University Vice President of University Relations and Marketing Steve Clark were authorized by Chair of the Board Patricia Reser to comment on behalf of the Board regarding the planning of the meeting, according to an email from Clark. Clark offered an explanation as to why the meeting is set to be held via telephone, rather than in person as the first meeting was.

“The meeting is being held telephonically to accommodate Board members’ schedules, many of which are set months in advance. Meeting in April enables a timely consideration of tuition and fees for the next academic year without waiting for the next Trustees meeting to be held in June.” Clark said.

With no physical meeting place, there will be no avenue for students to express their opinions, according to Clark.

“No opportunity for additional comment will be provided on April 21, as this meeting enables the board to consider the remaining agenda items from March 17 that were not concluded,” Clark said.

Oregon public-meeting laws allow for meetings of this sort to be held via telephone, if the public is given timely warning, according to the Oregon state Department of Justice website.

“Public meetings may be conducted electronically, but the public must have adequate notice and access to the meeting—no matter how it is conducted,” the Oregon DOJ website reads. “A governing body must provide notice that is reasonably calculated to inform the public and all interested parties about the time, place and agenda of public meetings.”

Colbert offered the options for students and other interested community members to hear the proceedings.

While the date, method and topic of the meeting have been determined, the outcome is still unclear. Members of the Board were approached individually for comment, but no expectations were given.

“It would not be appropriate for Trustees to predict the outcome of the full Board’s action prior to board discussion, debate and a vote,” Colbert said.

One trustee that did choose to comment personally on the upcoming meeting was Brett Morgan, a student at Oregon State who serves as the vice president of ASOSU in addition to his role as a trustee on the Board.

Morgan explained while his goal as an advocate for students would be no tuition increase, the situation he faces is not quite as straightforward.

“When the decision comes before me, it’s not about whether I can get it (a potential increase) to zero because I know I can’t get it to zero,” Morgan said. “I want and ultimately I’d wish that we could decrease tuition, I wish that this (OSU) was more accessible for everyone. But if I do that, I lose buy-in and credibility from other Board members, and so it’s a space to navigate where you have to try to understand how you can build and reinforce relationships that you can use to try to make the little nudges—pragmatic nudges in the right direction.”

“Things get more difficult when you are beholden to multiple interests in each of the roles that are different for each of the roles,” Morgan said. “The Board—its obligation is to the university and ultimately in a way, indirectly to the state. You’re acting in the best interests of the university in the hopeful best interest of the state because we’re a public institution, right? And then in my role as VP you’re elected by the students, for the students, to act in their best interest.”

Ultimately, the outcome of the meeting will be unclear until the actual meeting itself. At approximately 4:30 p.m. on April 21, OSU students and their families will discover the tuition costs they will face in the upcoming year. Clark offered a positive outlook on the meeting.

“We believe that students and their families want to know as soon as possible what tuition and fees will be for the next year,” Clark said. “The Board setting tuition for the next year also will give university officials important information by which to budget, plan for students’ financial aid needs and provide information that OSU administrators and student leaders can use in lobbying the Oregon Legislature for increased funding for higher education.”

The university issued a press release giving the time of the meeting as 2:30-4:30 p.m., and reiterated other details offered by the Board’s spokespeople, including the designation of the MU Journey room as an access point for the telephonic meeting, according to OSU News and Research Communications.

The Barometer will continue to cover this story online and via social media.