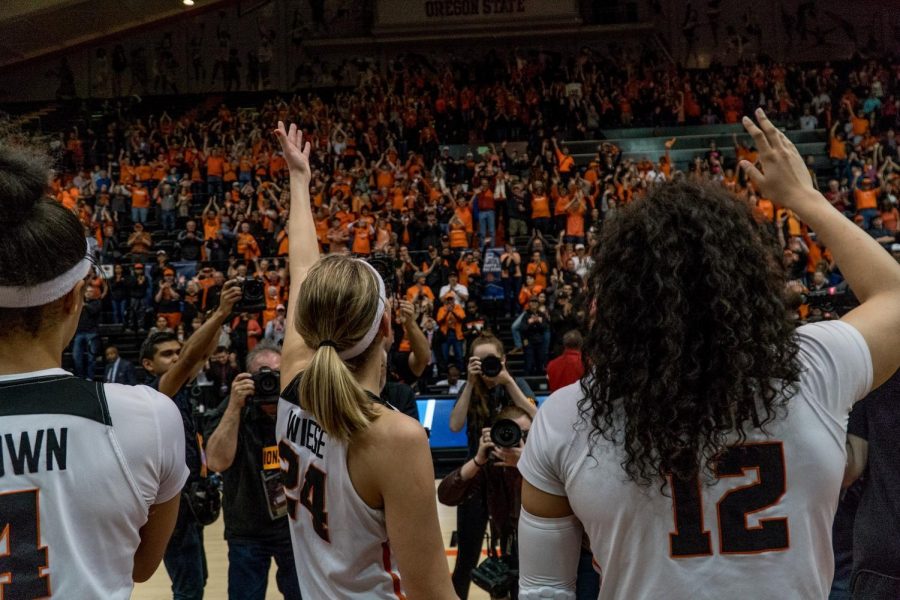 The Beavers take down Creighton to advance in the NCAA tournament

The Beavers danced their way out of Gill Coliseum Sunday night and straight into the Sweet 16.

With a 64-52 victory over Creighton in the second round of the NCAA tournament, the Oregon State women’s basketball team punched their ticket to Stockton, Calif.

“They did everything right for four years.” said head coach Scott Rueck. “They earned everything they’ve got up there. I’m so proud of them. They’ve created a legacy that will live on forever in this program.”

“What a great finish to their home career, to be 60-6 is astounding, just simply incredible,”Rueck added. “A place that had never won a Pac-12 title before their arrival and now they’ve won three straight. Now they’re going to be able to participate in their second straight Sweet 16 with a chance at more.”

Hanson, the Pac-12 Defensive Player of the Year, scored thirteen points in her final game in Gill. Rueck spoke about how key her offense was to the Beavers victory.

“(Hanson) wins games. Period,” Rueck said. “She’s going to do what it takes to win games. Today, she knew this team needed a spark. It’s her last game in Gill and she came out and played that offense she is capable of playing.”

The Beavers won the first two rounds of the NCAA Tournament this weekend in Corvallis. Hanson was happy to have ended her senior year in Gill Coliseum on a high note.

“You forget how hard it is to get here and certainly both of these games prove that,” Hanson said. “It’s an amazing accomplishment to have and I’m super proud that our senior year we get to go out from Gill with a bang.”

As Hanson prepares to end her career as a Beaver, she reflected back on how far the program has come.

“We saw a vision, bottom line,” Hanson said. “We saw what this place could be. I think we (Hanson and Wiese) can both attest to the fact that when we came on our visits, everyone was so kind and so nice and wanted this program to do well just didn’t really have the right stuff yet. Once, we kind of got that I think everyone wanted us to do well. That’s what we saw. We’ve worked hard for ourselves but we worked hard for Beaver Nation as well.”

Wiese ended her career at Gill Coliseum by dancing off the floor on Sunday night. Wiese finished the game with thirteen points, seven rebounds, and four assists before exiting the floor to a standing ovation. Wiese credited the fans with the team’s success.

“Our success is credited to our fans,” Wiese said. “They have made it so much fun. When the days are hard, that’s our motivation. It’s a grind out there especially in conference play and then you get to postseason. You have all these dreams and aspirations as a group but you have that bigger dream to inspire and work hard for the people who’ve had your back from the beginning.”

Orum finished with eight points and seven rebounds on Sunday night. When the final buzzer hit, she took a moment to realize it was her last game in Gill Coliseum with her team.

“I’m super proud of this team,” Orum said. “We’ve accomplished so much this season that went very underrated at the beginning of the year. I’m proud of the way we fought throughout the season and throughout these past two games.”

The Beavers will now head to Stockton to take on Florida State in the Sweet 16 on March 25th.