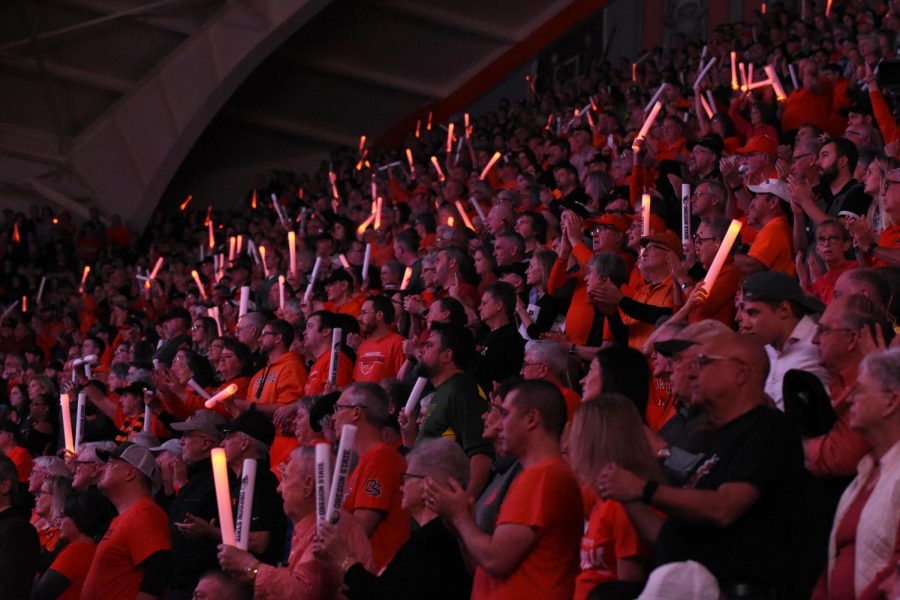 In this photo from 2020, fans support the OSU Women’s Basketball team in their home rivalry matchup versus Oregon on Jan. 26.

Holsinger has spent 13 seasons coaching in the PAC-12 between his five years at Oregon State and eight seasons at Washington State. This will be the first head coaching position he has held since 2007, in which he coached Montana Tech in the NAIA for two seasons.

His new contract with the University of Montana is set for four seasons through 2025.

Being hired as a head coach for such a historic and accoladed team like the Grizzlies was the goal that Holsinger has had in his head since the day he started coaching basketball. The Grizzlies Women’s Basketball team has an all-time record of 897-334 since 1974, several Big Sky Championships and have made numerous March Madness appearances.

“It means everything to me. You coach basketball to lead your own program someday.”

Throughout his time at Oregon State, Holsinger has helped the Beavers gain success. This included a March Madness tournament appearance in each of the five seasons, three Sweet 16 appearances, three PAC-12 titles, and the program’s only Final Four showing in 2016.

Holsinger didn’t just help on the court, he was influential in the recruiting process as well. In 2020 the Beavers earned themselves the eighth-ranked recruiting class in the nation with Talia Von Oelhoffen and Greta Kampschroeder being two of the standout incoming freshmen.

In 2018, Holsinger helped Oregon State go on one of the program’s most successful and historic postseason runs.

“One of my favorite moments was Marie Gulich’s senior year. She was the senior and the leader,” Holsinger said. “That same season we went to Tennessee, who had a 57-game win streak at home, and we won on their home floor to earn a trip to the Sweet 16. You break a streak like that and it’s just so historic and really stands out to me.”

Holsinger succeeds Mike Petrino at Montana, who held the head coaching position for the Grizzles on an interim basis. This previous season, the Grizzlies Women’s Basketball program concluded the season with a 12-11 record and a loss in the first round of the Big Sky Tournament.

Holsinger looks to make an immediate impact by cultivating a strong basketball culture surrounded by the right people in the program. Just like the head coach of the Beavers’ basketball team Scott Rueck has been doing.

“Scott created a culture at Oregon State that the community can get around and be proud of. We developed a culture that kids just want to be part of and I’d like to create the same thing in Montana,” Holsinger said. “The most important thing is that I’m there to impact the kids.”

Currently, Holsinger is putting in the groundwork to gather his new team’s staff and shaping up the roster. His one goal in mind is to get Montana back to a winning culture and to get the Missoula community behind the team.

“My ultimate goal is to win, to get that Big Sky Championship and bring the Montana program back to where it’s been before.”