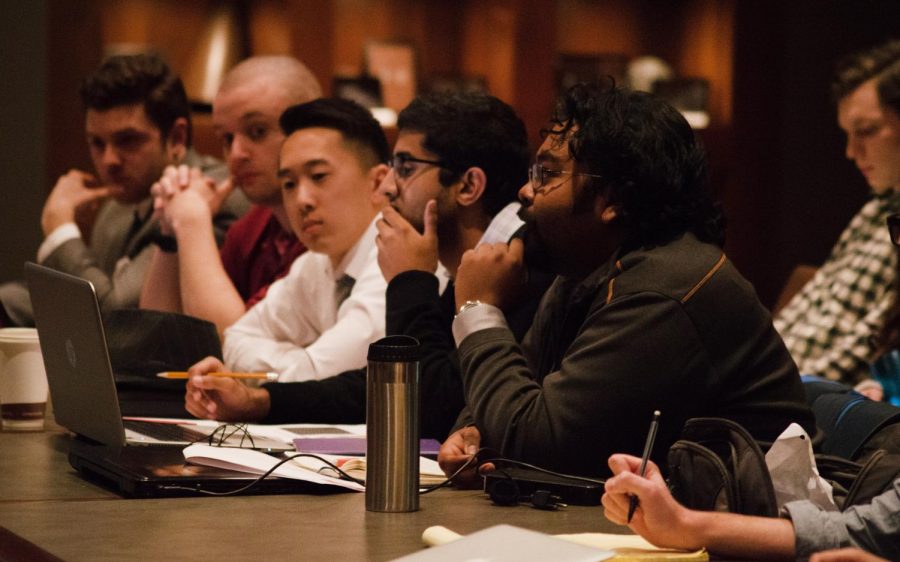 Rafid Chowdhury (far right) and other members of the SIFC discuss possibilities for the future of the athletics budget on the evening of February 27, 2017.

Working group to be formed to reevaluate rate at later date

These influential students were the members of a mediation group made up of six students from the Student Incidental Fees Committee and another six from the ASOSU House and Senate. This step in the student-fee setting process was triggered when the ASOSU legislature passed all of the proposed student fee budgets except for athletics. The funds in question, taken from every student equally each term, are used to subsidize student tickets for sporting events.

On Monday, Feb. 27, after much deliberation, the body passed the athletics budget at the level requested—$38.86 per student per term for fiscal year 2018—in a vote of 11-3 in support of the motion.

The motion carried a stipulation that a working group be formed to address long-term funding questions. This motion to put off larger discussions until further analysis and conversation was made by ASOSU House Rep. Andrew Damitio, a sophomore in environmental economics and policy.

“I wanted change at this meeting, but it was not going to happen. After two and half hours of back and forth in which, quite simply, we (did) not have enough data to make those changes, and long-term planning should not be disrupted by a rash decision made at an 11th hour meeting,” Damitio said. “I could not be comfortable making decisions to make cuts, even if I wanted them very much.”

Throughout the proceedings, several members of the committee, including Damitio, expressed concerns that the fee level that was not appropriate for the value being delivered to the students. MU President Rafid Chowdhury, a member of the SIFC, discussed his goal to alter the fee level.

“(I) hoped that we could reach a consensus on, not the proposed value that we initially had, but a new value that everyone would be happy with, because that was what I felt coming out of joint session: that we were really looking for a compromise, given that we had not done our job properly of scrutinizing the budget enough,” Chowdhury said.

For their part, representatives from the athletics department, including the new Vice President and Director of Athletics Scott Barnes, listened to the students’ concerns, provided clarification and articulated why they believed the athletics student fee brought value to the student body at-large. Barnes even suggested the working group be formed in the first place.

“I think what athletics brings is an opportunity to create an excellent student experience,” Barnes said. “We bring value other than just tickets to the table, and the partnership with our students is critical, absolutely critical. We want to open that dialogue and be as transparent and collaborative as possible.”

Chowdhury explained the options for alternative funding models brought up in mediation.

“One is the hybrid model where there is a subsidy, but at the same time students pay a premium for tickets just like most services that incidental fees funds,” Chowdhury said. “Or the other opposing model of (complete) freedom of choice to the students of opting in or opting out for a higher rate.”

Chowdhury argued for an immediate change in the athletics fee level, but the majority went a different direction.

“I voted against (the proposal) because knowing that what we were voting on is not right, because we were making the promise to change it in the future, which only means that we were not being true to ourselves,” Chowdhury said. “If we know that it’s not right and we need to change it, to come to a consensus and tie the hands of OSU students to pay, regardless of whether the decision is right or not, to me is not good. And that does not sit well with me, if I call myself a student leader and represent students. That’s not fair to the students.”

Peter Schwartz, the chair of the SIFC, voted in favor of the motion and emphasized the importance he attributes to taking more time to determine the proper level.