Election Results are in 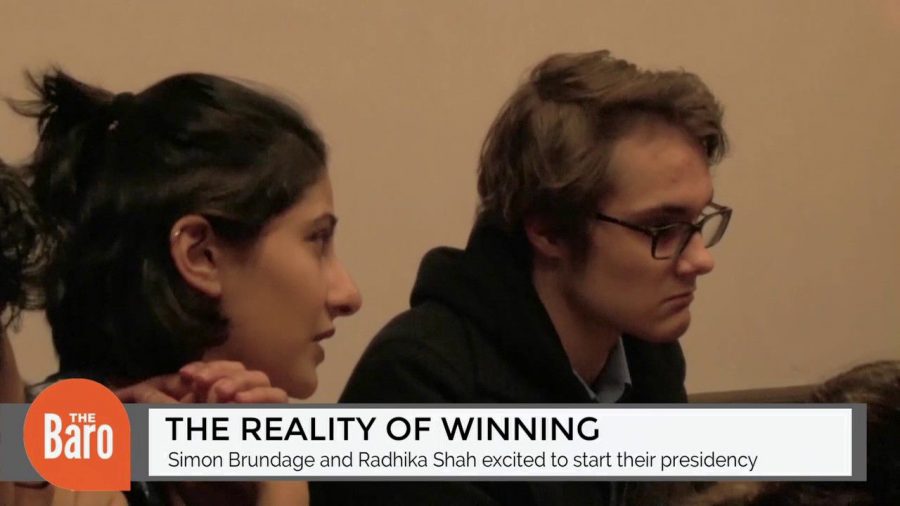 The ASOSU election results are in for Oregon State University and the official positions have been announced for the 2017-2018 academic school year.

After weeks of campaigning, public speaking and debates, the winners of the Presidency and Vice Presidency were Simon Brundage and Radhika Shah.

“I think it is still in the state of being surreal, for me I have not really fully processed the implications of it and I don’t think it will kick in till we meet with the faculty advisor tomorrow and talk about what our next term responsibilities are going to be,” Brundage said.

“I am just super pumped,” Shah said. “With the air of nervousness, it is a pretty big deal. It has not set in yet.”

12 percent of the student body voted in this year’s election,  a five-percent decrease from last year’s 17 percent.

Current ASOSU Vice President Brett Morgan fought for the bill that changed the voting from spring term to winter term, and for the voting period to change from a two-week period to a two-day period.

Prior to the election, Morgan had hoped that at least 20 percent of the student body would vote. He reflects on why he believes the voter turnout was below the level of last year and that he is still happy with students came out to vote.

“Some people may not be in tune or paying attention because they were not anticipating it,” Morgan said. “Also people may be shifting into that final’s mindset. On Thursday it just dumped (rain) all day long so it just made it harder to get out, we were with iPads and vote at home sheets so it made it a little harder to engage with folks.”

This year there were no violations filed against any candidates throughout the entire election season which was a little weird according to Morgan.

“It is a self-accountability tool for candidates to have on each other, and I don’t know if I can interpret that as candidates understanding the rules really well or people understanding how to run effective and fair campaigns that didn’t break any of the rules,” Morgan said. “So I was happy about that.”

Shah mentions how she still wants to reach out to the students who voted for not only her and Brundage but the two other teams as well (Jacqueline Logsdon and Josey Koehn, and Hevani Fifita and Hunter Briggs).

“I want to start off strong and soon, I don’t want to lose the people who did support us, and their confidence in us,” Shah said. “I want to be very careful about still listening to student’s voices, even the people that supported other campaigns, I do not want their voices unheard.”

Brundage and Shah are planning on working with the other two teams that did not win, to collaborate on some ideas from the other team’s platforms.

“We think that Logsdon and Koehn bring a very powerful compelling and informed argument about sexual assault and violence prevention, we would love to involve them in the process. Fifita and Briggs, their campaign involved a lot of passion and disdain for ASOSU in terms of diversity and involvement. Hearing their voices, and recognizing the voice’s of that particular community will be very important in our transition process.”

They won’t officially begin their presidency and vice presidency until the 2017 – 2018 academic school year, but the next term will be used as a transition period.