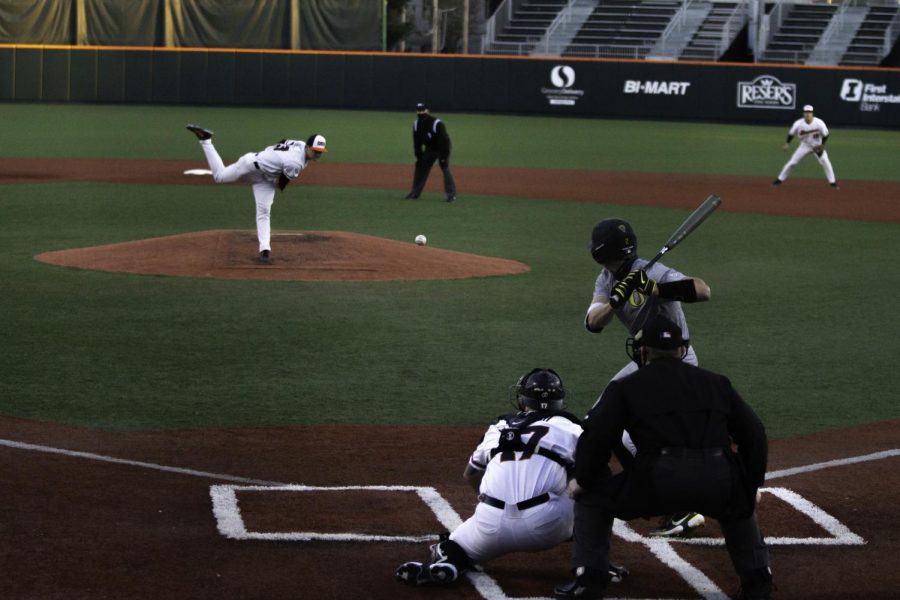 In this photo from March 12, OSU pitcher Kevin Able pitches a strike in the third inning of the OSU vs UofO triple header series. Abel started for the first game of the team's series vs Cal, helping the Beavers to a 15-8 win.

The Beavers baseball team completed a three-game sweep against the conference opponent California Golden Bears on Sunday, April 18th, to put themselves back on top of the PAC-12 standings.

The end of the three-game series officially marked the midway point of conference play for Oregon State with 15 conference games left to be played. Currently, the Beavers sit at first place in the conference with a 10-5 record, two games ahead of the Oregon Ducks.

The series kicked off on Friday, April 16, with the Beavers pulling off a late-game comeback, scoring 11 unanswered runs in the seventh and eighth inning to defeat California 15-8.

The offensive surge was led by sophomore outfielder Jacob Melton and junior infielder Ryan Ober who combined for ten of the Beavers’ runs driven in on the day. Melton ended the day hitting four for six with six RBI’s, while Ober added an eighth-inning grand slam to put four more runs on the board. This would be Ober’s second career grand slam, both have come against the Golden Bears.

Oregon State ended the game with a total of nineteen hits and every starter having at least one hit on the day, with many of them having multi-hit performances. The Beavers hitting performance sets this season’s conference-high for most in a game.

Both teams ended up turning to the bullpen by the fifth inning, where the Beavers would send out five pitchers after sophomore right-hander Kevin Abel finished his start after the top of the fourth inning to keep the Golden Bear’s hitters on their feet. Sophomore right-hander Bryant Salgado would end up earning the win for the Beavers, his third of the season.

The Saturday afternoon game proved to be quite the opposite of Friday’s results. The Beavers found themselves in the win column once again with a 2-1 final score in a pitcher’s duel. Oregon State set freshman lefty Cooper Hjerpe on the hill and California started Sean Sullivan.

Hjerpe held California to just one earned run in six innings on only three hits and set a career-high of nine strikeouts. The Oregon State offense would once again show a spark in the seventh inning with an Ober two-run single to left field.

Once again, the Beavers’ bullpen was put to use in a combination of sophomore Joey Mundt, freshman Jack Washburn, and senior Jake Mulholland. The bullpen threw for three perfect innings, not allowing a single baserunner.

Mulholland’s save opportunity in the ninth inning proved to be record-breaking for him, as the pitcher set the program’s career save record at 38 total saves. The record was previously held by Kevin Gunderson who’s career at Oregon State lasted from 2004-2006.

The final match of the series came on Sunday, April 18, and proved to be another close contest between the Golden Bears and the Beavers. California got the bats rolling early in the first inning with a triple and single to score two runs.

Oregon State’s first basemen Garrett Forrester was able to move Ober across the plate in the bottom of the first inning to answer back and decrease the deficit to one run. Freshman right-hander Will Frisch made an early relief appearance in the top of the second inning to hold California in check.

He did just that, allowing just one earned run on three hits, with two strikeouts through four and two-thirds of an inning. California’s Dylan Beavers hit a solo homer to left in the top of the third to increase their lead to 3-1.

In the top of the fourth inning, Ober found himself in the hit column once again with an RBI single to right field to score teammate Jacob Melton. The Beavers’ offensive success from game one of the series would carry into the fifth inning, where sophomore utility player Wade Meckler would hit a single and score senior Andy Armstrong to tie the game at three apiece.

An RBI single from Forrester in the sixth inning and a sacrifice fly from Ober in the eighth would lengthen the Beaver’s lead to 5-3, in which the bullpen was able to hold the Golden Bears to a scoreless seventh, eighth and ninth innings.

Mulholland would appear to earn another save increasing his season total to nine and sophomore reliever Chase Watkins would earn his first win of the season.

Standout Performers of the Weekend

Ryan Ober – Ober had an impressive outing against the Golden Bears in all three games. In 12 at-bats Ober was able to hit a grand-slam, drive in seven runs, and hit for a .417 batting average.

Jacob Melton – Melton started the rally to bring back the Beavers on Friday night with a game-tying two-run triple to right-center. Melton tallied up four RBI’s in the Friday game alone, and another two through Saturday and Sunday. Melton is now sitting at a .420 season batting average which has put him into the top ten for hitters across the nation.

Oregon State Bullpen – The Beavers’ bullpen as a unit was, once again, lights out for the program throughout the series when the team needed them most. Mulholland earned two scoreless saves, the entire bullpen pitched for a 3.53 ERA on the weekend, and the group gathered up 14 strikeouts in the process. The Oregon State pitching staff now ranks third among the nation with a collective 2.68 ERA and fourth in WHIP at 1.10.

The Beavers are now 25-10 and are currently sitting right outside of the USA Today Top 25 Coach’s Poll with the 26th most votes, right behind the University of Miami who has earned 76 votes in the Week 8 Polls.

The 5-3 victory marks Oregon State’s ninth straight home series win against California and also kept the Beavers atop of the PAC-12 standings before heading into six out of conference games against Portland, UC Irvine, and Loyola Marymount.

After the six-game out of conference stretch, the Beavers will return to PAC-12 play and face off at UCLA.

Oregon State returns to action on Tuesday, April 20 at Goss Stadium to face off against the Portland Pirates at 5:35 p.m.