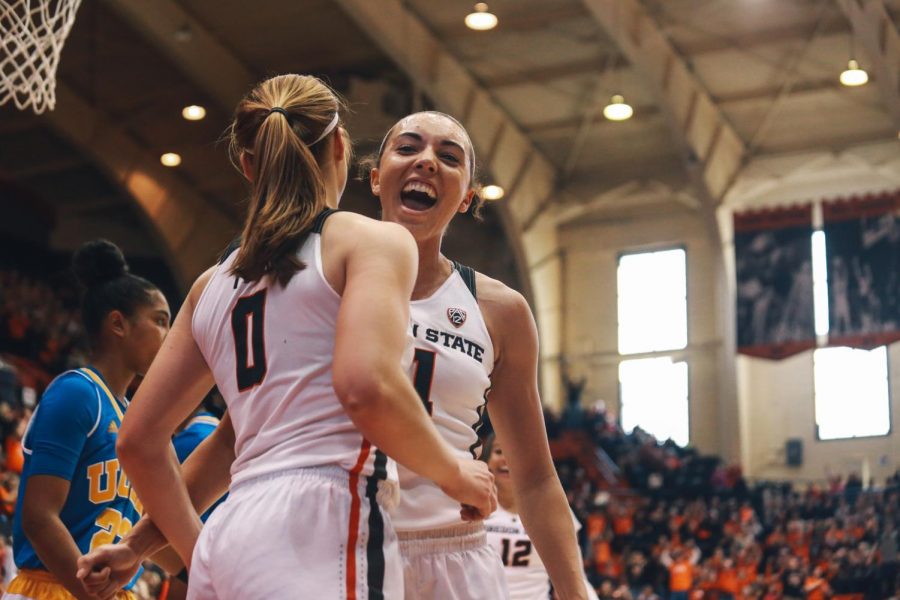 Last Friday was a day centered around giving and care at Gill Coliseum. It was Breast Cancer Awareness night, and despite OSU’s loss to the Trojans, the Beavers still supported the cause that has meant so much to them.

“I thought we played mentally soft and we weren’t the the aggressive team,” head coach Scott Rueck said. “We were reactionary tonight and we came out soft when they came out mad. We thought they’d just roll over for us but nobody is going to do that in the country’s best conference.”

Following a strong start to Friday’s game in which the Beavers began on a 9-2 run, it appeared that OSU was going to cruise to an expected victory against a struggling USC team. USC would then go on to call a quick 30-second timeout in an attempt to halt the Beavers momentum. From that point on, USC would dominate the remainder of the contest.

The Trojans would proceed by posting a 15-0 run in which the Beavers turned the ball over five times in just 3:30. USC would not trail the Beavers for the remainder of the game.

“They amped up the pressure and I have not seen pressure do that to this team all year or even a couple of years to be honest, Rueck said. “(USC) was the stronger, more aggressive team all night and we did not match that intensity for enough of the game.”

In total, OSU turned the ball over 20 times which accounted for 28 of the 70 points scored by the Trojans.

OSU matched their second lowest shooting percentage of the season connecting on just 35 percent of their baskets, while allowing a season high 45 percent from the field for the Trojans; well above their season average of just 33 percent.

“We just didn’t play hard, long story short,” redshirt junior Breanna Brown said. “I think it was us not doing what we worked on more so than their pressure; at the end of the day when we take care of business and execute the way we’re supposed to, (pressure) does not affect us and tonight we didn’t execute.”

Despite the unforeseen upset and 20-point blowout victory by USC, the Beavers knew they were committed to carrying out a task bigger than the game of basketball; creating and promoting awareness in the fight against breast cancer.

In continuing the tradition of bringing attention to the personal battles in which people face against breast cancer, senior guard Sydney Wiese was forced to part ways with something very close to her; her hair.

Following the tough loss, fans and players gathered at center court to join in celebration and support of the cutting of Wiese’s personal hair that she would donate to someone else in need.

“To me the cause is bigger than basketball anyway and this an awesome opportunity to give back in a way that is so meaningful and real to so many,” Rueck said. “What we do is fun and games and there is nothing fun and games about that and so I think it is good for all of us to step and have a dose of reality sometimes and this helps us all do that.”

The Beavers had not lost back-to-back regular season games since they lost to USC and UCLA in Jan. of 2014. On Sunday, UCLA entered Gill Coliseum attempting to hand the Beavers, not only a second consecutive loss, but also their first defeat at home back-to-back since 2013.

For just the third time this season the Beavers found themselves in a losing position, forcing Wiese to step up provide senior leadership.

“I think in general it’s important to be positive and as a group you take the lessons and you learn,” said Wiese. “One of the main things I focused on was giving bursts of confidence, not so much a focused conversation of what to do better, but trying to find windows of positivity and to remind everyone to have a short term memory.”

In a competitive first quarter of action, Wiese continued her historic career as a Beaver by passing Leilani Estavan to become the OSU all time leader in assists with 578.

“I think it shows the talent that I have been surrounded by all four years,” Wiese said. Coach Rueck draws up great offensive sets and it’s up to us to finish the job. I am thankful to be in the position but I’m even more thankful for the people I can share it with. That is the beautiful thing about assists, you get to share the ball.”

At halftime OSU led UCLA 31-27 behind a strong defensive performance, holding the Bruins to just 33 percent from the field and outrebounded 26-17. The Beavers were once again playing like a top 10 team in the country, showing signs that the Friday loss was behind them.

Freshman guard Mikayla Pivec dazzled throughout much of the game on both sides of the court. A layup to beat the first quarter buzzer was just the start to a breakout game by Pivec. She would finish the game with 12 points, five rebounds, four assists and perhaps most importantly three critical steals on defense.

“That tip in play was incredible, and gave us a ton of momentum,” Wiese said. “(Mikayla) anticipates the boards so well and works relentlessly to try and get any type of offensive board or rebound in general. I think her defense today was key. Offensively she was going hard to the rim, and that is what we needed from her today. She stepped up big and didn’t play like a freshman, she isn’t a freshman any more.”

Pivec wasn’t the only one determined to shake off Friday’s loss. Senior forward Kolbie Orum contributed 12 points off the bench of her own in addition to nine points coming from sophomore guard Katie McWilliams by way of strong 3-point shooting, finishing 3-4 from behind the arc. In total the Beavers dominated the points off the bench battle 21-9 illustrating OSU’s strong scoring ability from that area.

“I think it is important for us to have balance and have balanced scoring from different positions (such as) Katie hitting three big 3-point shots in the game, one of which put us up by six,” Pivec said.

“The bench points were huge,” Rueck said. “That was a focal point for me going into today. To beat a team as good as UCLA, or really to win in this conference you have to have it going from everywhere, and tonight everyone who played significant minutes contributed in a big way.”

Despite actually having more turnovers on Sunday, OSU clamped down on defense allowing only 18 points off of 21 turnovers against UCLA. Junior star Jordin Canada was held to only 2-11 shooting before an undisclosed injury removed from the remainder of the game following an entanglement among defenders.

“I loved the passion and intensity we played with on the defensive end, which was missing the other night, it was back today and I thought it was reminiscent of we have been all year,” Rueck said. “I thought we handled adversity from the other night which obviously was not a fun thing to be apart of for us, and it was a great bounceback win for us against a really great team.”

By securing the victory 68-61 on Sunday, the Beavers have now clinched a highly coveted first-round bye in the Pac-12 tournament. And despite the loss on Friday, OSU still controls their own destiny the rest of conference play as they hold the tiebreaker over Stanford and Washington.

The Beavers will resume practice on Tuesday before facing a difficult test on the road at both Utah and Colorado next weekend.

“(Pac-12 play) keeps us on our toes and and we can’t get complacent,” Wiese said. “We’re getting to the end of Pac-12 conference play, which is when the fun truly begins.”