Coach Andersen : Building the next generation of men for Oregon State football 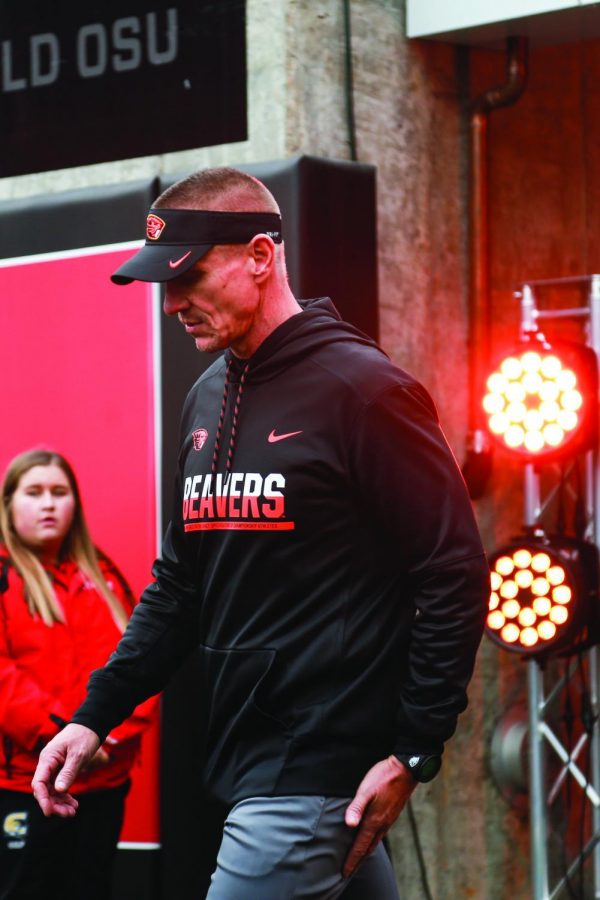 After nearly thirty years in coaching, Beavers head coach Gary Andersen sits before a new season with one goal in mind : his players.

From Sugar Bowl victories, to winless Pac-12 seasons, Andersen knows what works and what does not. As football is on the rise again in Corvallis. Andersen is focused on building student athletes of character on and off the field.

The Oregon State dream for Gary Andersen began long before Coach Mike Riley suddenly left the program back in 2014. It began in 2007, during a Pac-10 game on the opposing sideline of the Beavers.

“Oregon State for me started a long, long time ago. When I was back at Utah, it was when it was still the Pac-10 it would’ve been 2007, 2008 somewhere back in there. We played Oregon State twice. We came up here one time and lost,” Andersen recalled. “We played them the next year at home and won, in Utah. Those teams were built much like we were at Utah. That’s all I know, is the way I was built in this game of football because I believe in what I believe in.”

As the offseason wraps up, Coach Andersen is coming off of his favorite time of year.The time when he gets to learn his team, the in’s and out’s, and learn who the leaders will be in the coming year.

“You get to spend more time with the kids and get to be involved more so in their lives. Every phase of being in a football program as a coach is competitive whether it’s the offseason, whether you’re building the kids, whether you’re recruiting and competing to get kids to come to Oregon State or it’s the season. The offseason is fun because it’s really a time where you get to see the kids develop in life much more so than the other cycles.”

Andersen and his staff make it a priority to invest in the players and their lives in the offseason.

“If you make it important to get around the kids this time of year, you have that opportunity. It’s important to us and we make time to do that.”

After two years at Oregon State, Andersen has already began to build his legacy. A strong recruiting season led the Beavers to a top-50 nationally ranked recruiting class.

Andersen reflected back on his first Pac-12 win last season, an overtime victory against the California Bears.

“I’m an emotional guy. I’ll never hide that. I’ll never shy away from that and my kids know that so I can go up and down pretty quickly. That was a time for those kids to be able to break down a barrier. “

Only a few of Andersen’s players had ever won a Pac-12 game prior to the win against the Bears.

“There was such a small handful of kids on our team that had ever won a Pac-12 game. It was such a small handful that had ever felt that. When you can do something that you haven’t done before as a group that you talk about doing and you accomplish it, it’s a tremendous feeling for those kids,” Andersen said. “Those wins for me now in my career, it’s great to win for the kids. Personally, I don’t care about that. I want to win, but I want that for the kids more than anybody else.”

Andersen and his staff led the Beavers to a 34-24 Civil War victory in his second year at Oregon State.

“You should always expect to beat your rivals. I expected to beat them the first year. You should expect to win every game but there is something different about rivalries because it’s called a rivalry. Is one game more important than the other because at the end it’s a W or an L? In the case of a rivalry game it is because it just divides a state. For us, we’re so close. You’re either one or the other.”

Andersen explained that from President Ray down through the administration, there is a dedication to the student athletes.

“We’re there to help them but we’re there to ensure and give them the best opportunity to move forward in life not go out there and win football games. They’ll do that, they’ll take care of that if we take care of them off the field and do things the right way and that’s what President Ray wants way more than winning football games. Trust me, winning is important. We’ll all be judged by that at the end of the day.”

When asked about what he hopes his legacy to be at Oregon State, offered a response that exceeds the playing field.

“That I took care of all my kids. Period. Nothing else. That’s all I care about. Doesn’t mean they like me. Doesn’t mean they love me. But it does mean that they knew that what I said to them and the way I guided them, that I did my best to take care of them.”

While the Beavers look ahead to spring football, Gary Andersen’s focus is on the future. Winning games, yes, but also building a team that can succeed long term. A team of men who can succeed in their careers, in the real world, with wives, and families. His hope is to take care of his players’ future

The Beavers will open spring camp on Friday, and play their  spring football game at Reser Stadium Saturday, March 18th.

All eyes will be on Andersen’s third season as the Beavers head football coach.

The wins and losses will come this season but one thing remains constant, Gary Andersen is building up this team but more importantly he is building up the next generation of men at Oregon State.