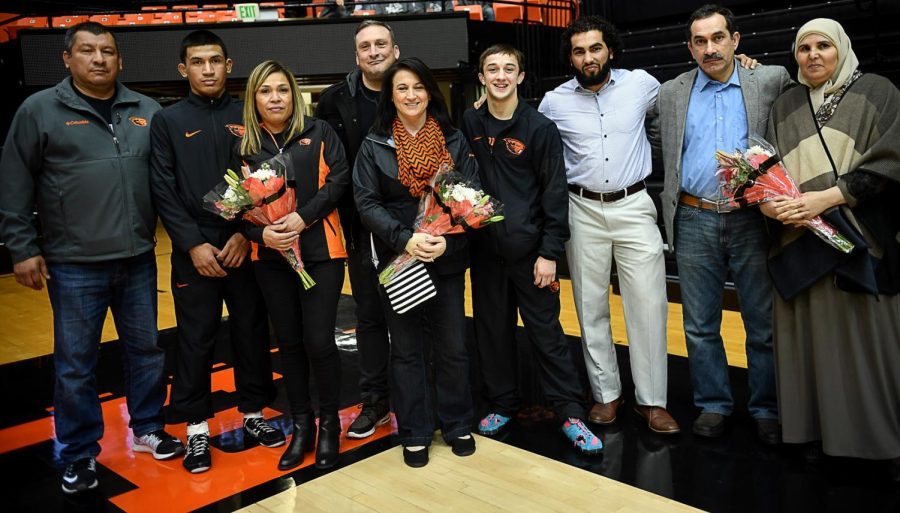 Two pins by Kegan Calkins and Cody Crawford to cap off the night sealed the win over CSU Bakersfield.

Delgado and Palmer wrestled in the meet, while Alshujery watched with his family from the bleachers. Alshujery has been plagued by injury throughout his wrestling career, still recovering from an offseason knee injury.

Oregon State started the dual at 133 tonight, Palmer was dominant in the opening act, landing a technical fall versus Bakersfield’s Carlos Herrera. After a major decision in a win Friday, Palmer was able to go out on a high note in his last match at Gill.

“It was really nice to go out there and put on a show for the fans,” said the 133-pounder. “Kinda end it how I wanted it to.”

Redshirt Freshman Jack Hathaway followed up Palmer’s match with a decision victory of his own. Hathaway’s win was an upset over the Roadrunners’ No. 17 Russell Rohlfing.

“Jack got a takedown, and got the lead,” said Head Coach Jim Zalesky. “He’s one who was taking a lot of defensive shots… and just gotta be able to finish those shots better.”

Head Coach Jim Zalesky has said in recent weeks that he would like to see improvement at the middle weights, especially Abe Rodriguez. Rodriguez did that Sunday night, notching a 7-6 victory over Bakersfield’s Jacob Thalin. However, at the 165-pound weight class, OSU’s Rodney Williams was defeated by Bakersfield’s No. 20 Lorenzo De La Riva by pin.

Bob Coleman did well against Matt Penyacsek, building an 8-3 lead after the first period. The 174-pound true freshman entering the night at 4-18 on the season, but landed his fifth win after a 10-8 victory over Matt Penyacsek.

“Bob won a match which he hasn’t won a lot this year,” said Zalesky. “That was a big match for him to win.”

Redshirt Freshman Seth Mcleod, a 184-pounder, defeated (Ryan Battisto) to push the Beaver lead to 8, 17-9. Redshirt Sophomore Corey Griego entered his match at 20-8, but neither him nor the contesting Matt Williams could score in the first period. However, Griego was able to turn things around in the second, landing several takedown, and won the match 8-3.

“I knew we needed to win the ones where we’ve been having success,” said Associate Head Coach Kevin Roberts. “I think you can tell by our team, we like to wrestle at home.”

Cody Crawford was barely on the home mat at all tonight, pinning his opponent Jacob Sieder in 1:04. Crawford was able to land two near-falls and a takedown before the pin. The Beavers led the match 26-9 with Kegan Calkins and the 125-pound bout still remaining to make things official.

Calkins was able to secure the pin in the final match of the night to cap off the success-filled evening for the Beavs. A sub-one minute pin for the Redshirt Sophomore has stemmed from both the team and Calkins’ recent successes.

“I think it’s a big exclamation point toward where our season’s going,” said Calking. “It was a rough beginning, but we’ve been picking it up here towards the end, but we want to peak in March.”

The back-to-back wins by Crawford and Calkins are what Jim Zalesky likes to see from his guys going into Pac-12s.

“We probably won the Pac-12s on bonus points last year,” said Zalesky. “Anytime you get pins, it’s huge–especially at Pac-12s.”

The Beavers travel to Norman, Oklahoma on Feb.17 to battle the No. 17 Sooners in their final matchup before the Pacific-12 Conference Championships.