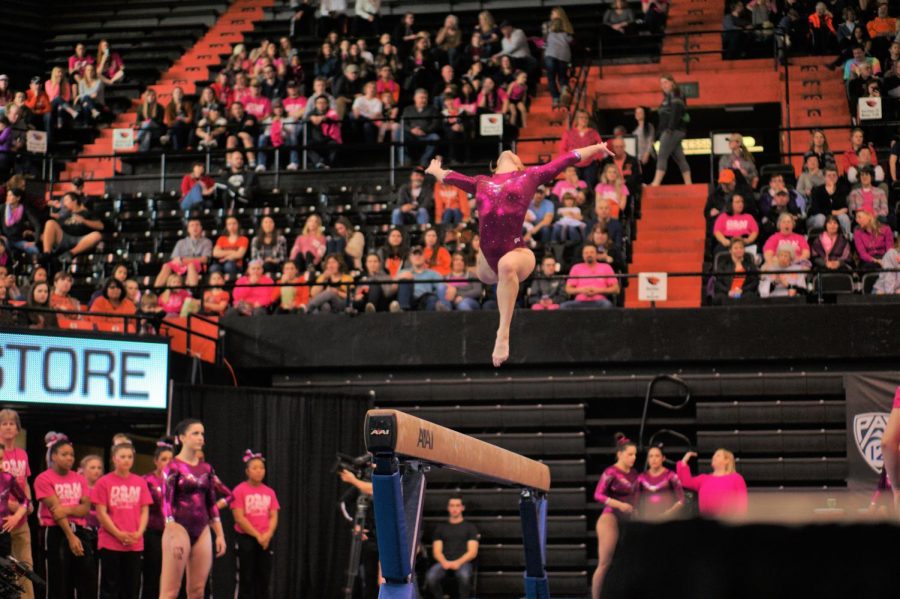 Senior Madeline Gardiner leaps on the balance beam during the Beavers' upset of No.4 Utah.

It had been four years since the Oregon State gymnastics team defeated a top-five ranked opponent. Now, the wait is over.

Beating a top five opponent in such a way would usually would be enough excitement for an afternoon, but the day was also scheduled to be the annual DAM Cancer meet. The event gave an opportunity to stand in solidarity and be a beacon of hope for those fighting against cancer.

“It’s a really special weekend for us,” said head coach Tanya Chaplin. “We know, there are so many people in the country and in the world that are fighting through this disease, and many of our lives have been touched by different people.”

Personal stories of family members who are struggling or have struggled against cancer provided encouragement for both the gymnasts and the coaching staff.

“On many of our teams we’ve all watched our loved ones wake up and fight for their lives every single day,” said Chaplin. “I think that’s what gives us the motivation. We get to go out there and fight on the floor, but it’s something that we just love to do. To be able to bring joy and passion and know that we are out there fighting for this cause and competing for this cause, makes all the difference in the world.”

With such a highly ranked Utah in town, the Beavers needed to use all the motivation and focus they could muster.

“I think our biggest thing was to really stay in our own bubble, stay with us and what we can control,” said Chaplin. “You know that when you’re competing against these teams you have to have a solid five scores and so with or without watching Utah or watching the scoreboard, you still know that if you have a mishap on one of those routines, you’re going to have to have five more great scores. So no matter what happens, that’s part of the game.”

Oregon State trailed the Utes by over three tenths going into the last routine. McMillan needed to score better than a 9.900 on floor to ensure a victory for the Beavers.

“You can’t really think about the scores or what happened before you or really where the team was standing next to Utah,” McMillan said. “I just went up and did the routine that I knew how to do, the routine I’m confident with, and [the judges] liked it.”

McMillan’s floor score of 9.925 ended the meet with a Beaver win and a team dogpile.

“It was definitely something that was magical,” junior Dani Dessaints said. “Tanya told us before the meet, ‘Do everything your supposed to do just like we’re in the gym, just remember that this night is going to be magical.’ She was right, it will be something that will go down in Oregon State history for sure.”

The historic meet is over, but that doesn’t mean the team plans on stopping. There are four more match ups before the Pac-12 Championships in March.

“Its incredible to see the potential we still have, because [Saturday] wasn’t perfect,” said senior Megan Jimenez. “We still have mistakes and things to work on, but to come off with a fight like that and a win like that is just something that installs so much confidence into this team.”

“Utah is always known as ‘that team’ to beat and we are always seen as the underdog,” said Dessaints. “But we just proved to the entire nation that we are out for blood and we’re coming for the top five teams.”