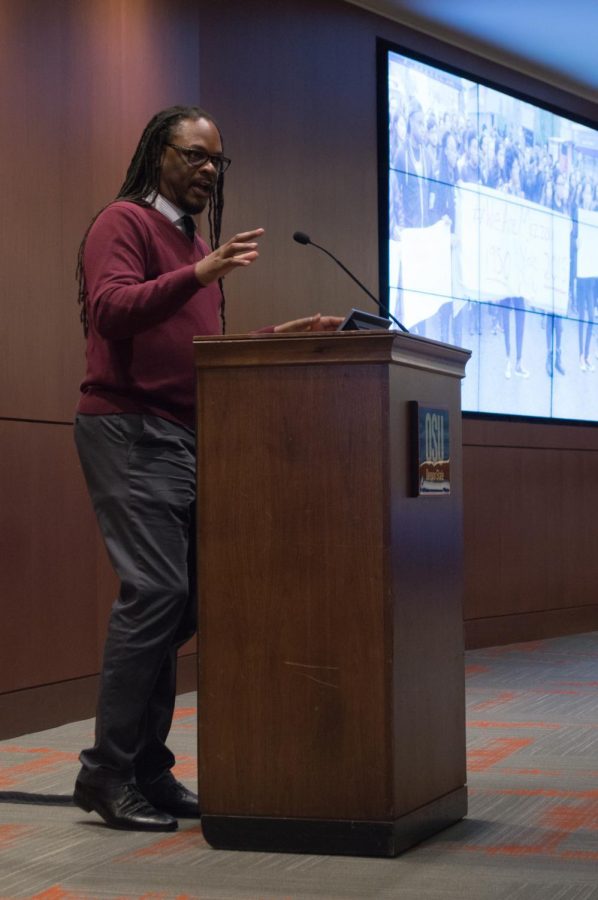 Two weeks ago, a bake sale was held in the SEC Plaza in which the prices of goods were determined by the buyer’s race or ethnicity. This event was put on by Turning Point USA, a conservative activist group with chapters on college campuses across the country, to argue against the use of affirmative action to make distinctions between white and minority students in college admissions.

Austin McClister is the president of the Turning Point USA chapter at Oregon State University, and was one of the students who put on the event.

Turning Point has put on events in the SEC plaza in the past, but this event in particular drew both controversy and conversation, the latter of which was the main intention of the event, according to McClister.

“We’re trying to start conversations more than anything,” McClister said. “The bake sale portion of it is more to provide a model to represent affirmative action and how we think it is very unfair.”

McClister explained that the club believes using a person’s skin color to make a judgement about what assistance they may or may not need, rather than using their socioeconomic status, is racist itself.

“Hopefully we can open up channels to other students on campus, let them know about Turning Point, but also let them know that this is going on, and we might get somewhere,” McClister said.

This event and the negative response it drew from some students on campus, including a letter to the editor in that week’s issue of The Baro, led to broader discussions about what kind of political speech should be allowed on the OSU campus, in what spaces and under what circumstances.

The SEC Plaza is a public space managed by the Memorial Union. MU President Rafid Chowdhury leads the MU Advisory Board, the body responsible for directing the operations, maintenance and future plans of the Memorial Union. His job is to ensure that the needs of students are being met.

“Turning Point USA did not reserve the space by themselves, because they’re an external organization,” Chowdhury said. “The College Republicans put in a request for the space and they sponsored Turning Point USA to come and use that space.”

Chowdhury explained that by going through an intermediary, Turning Point was not in violation of the MU’s policies regarding reservations.

“They (all student organizations) can always bring in guests,” Chowdhury said. “If we don’t expand our horizons by bringing in other people, experts or other things, then all our events and activities would be a bit boring.”

However, Chowdhury explained that not all of the requirements were met when the space was reserved.

“When they put the reservation in they did not go through the entire process properly, so we were not aware of the nature of the activity,” Chowdhury said. “Hopefully in the future they abide by the regulations that we have in terms of getting the space and giving us a heads up, so that we can better prepare ourselves for serving the students.”

Lawrence Ross is an author and lecturer who visited Oregon State the week after the bake sale to give a talk on the history and present state of racism on college campuses, specifically in regards to fraternities and sororities. In his talk he brought up similar bake sales that had taken place on other campuses around the country.

“The whole idea is to try to make the argument as simplistic as possible, so what you’re trying to do is get a visceral reaction from people who really don’t understand the inequities within society,” Ross said.

Ross explained that, in his view, the students putting on the event did not understand the deeper issues associated with race in America.

“When you have the anti-affirmative action bake sale, what you’re basically doing is making the assumption that society is equal,” Ross said. “You’re denigrating where white supremacy takes place, in terms of the foundation (of the U.S.) and systemic racism.”

Ross went on to examine why he thought Turning Point put on the event.

“Most Americans don’t understand how racism works,” Ross said. “When you actually understand how white supremacy begets systemic racism, then you take a look at the educational system that was intentionally set up in a way to create inequities in society based upon race that didn’t go away.”

McClister and the other members of Turning Point had a very different perspective on the question of whether or not their actions were racist.

“Absolutely not. I think the people that would call it racist are the ones that chose to stand back and judge it and not talk to us,” McClister said. “Those that came up and talked to us and had a dialogue came away from it, as did we, with a little bit of a different point of view.”

Ross explained his point of view, stating that there is a difference between racism and using race as a factor to correct racism from history.

“There’s nothing wrong with understanding the fact that if race was used as a way to create the disparities on campus, that you can use a detuned version of not racism, but using race again as a way to correct that,” Ross said. “If you want to eradicate polio, you don’t say that you are using the polio virus to infect someone with disease, what you’re saying is that you’re using a vaccine to actually cure the body.”

The issues of affirmative action, what constitutes racism and free speech will continue to be debated on college campuses and in the wider culture. There will be many heartfelt disagreements between opposing factions. First-year construction engineering major and member of Turning Point Brandon Bodenhamer appreciated the experience of speaking to people who disagreed with his beliefs and the group’s message.

“I went in with the mentality that people were probably just going to walk by yelling profanity of some sort, saying that we’re racist,” Bodenhamer said. “One of them did do that, but the other ones were genuinely interested in having a conversation and that was refreshing.”

You can listen to the full interviews with Lawrence Ross and Austin McClister here.