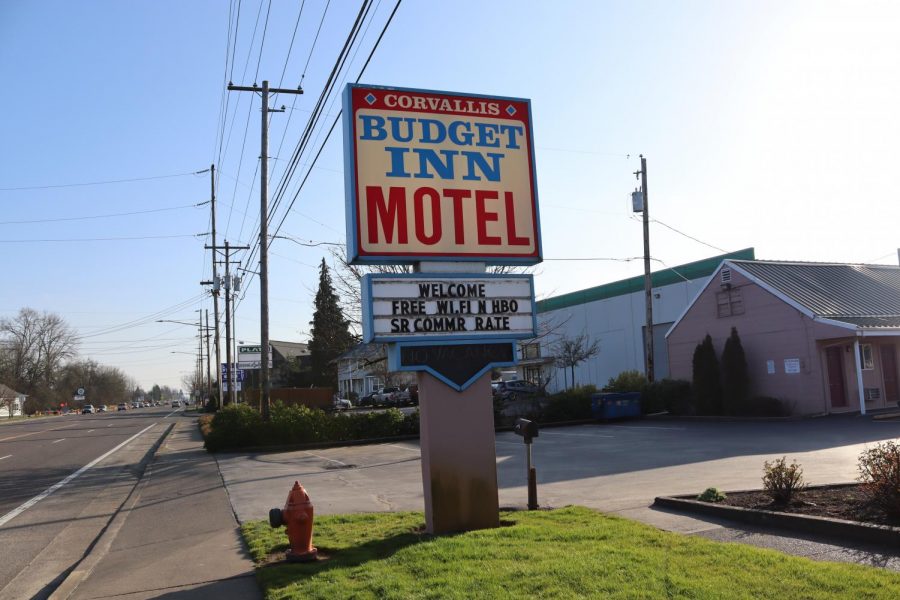 The Corvallis Budget Inn can be seen on the Corvallis' 99 West road. With the city of Corvallis purchasing the south town motel, the city is now repurposing to building to support the ever-growing local homeless population.

With $2.475 million in funds provided by Project Turnkey and allocated by Oregon legislature, Corvallis Housing First purchased the Corvallis’ Budget Inn Motel for use as a temporary homeless shelter.

According to Andrea Myhre, director of CHF, the family-owned establishment served as a motel for thirty years before purchase. Aiming to open some time this month, Myhre said the 24-room motel will be meant to be emergency housing for six to nine months before transitioning to a permanent shelter, to serve the most vulnerable in the community.

More specifically, CHF will prioritize serving people with disabilities, veterans, people of color and seniors. Members of the community who are registered sex offenders will not be admitted for housing.

The CHF was founded in 2007, previously running the Cold Weather Men’s Shelter. They purchased a burned-down apartment building, now Partner’s Place, with state funds and rebuilt it for use as housing for people that had been chronically homeless. The Van Buren House and DeDe’s Home are also homeless shelters in Corvallis owned by CHF.

“[The Budget Inn Motel] is our fourth property that we have purchased and the fifth property that we are involved in helping to manage,” Myhre said. “Previously, we had 39 units of housing, so with this project, we will have a total of 63 units available.”

According to Oregon Community Foundation’s official press release, Lane County Human Services was also selected to receive a Project Turnkey grant, in the amount of $5.56 million in state funds to purchase and transform a 50-room hotel in Eugene, Ore. Priority will be given to wildfire evacuees.

Devon Ashbridge, public information officer for Lane County said via email that the county was carefully tracking Project Turnkey when it was in legislation, and once approved, they were eager to apply in order to provide another opportunity for shelter for Holiday Farm Fire survivors.

“More than 400 homes were destroyed by the Holiday Farm Fire and another 25 were damaged,” Ashbridge said. “Survivors may be living with friends or family, renting or buying homes in other areas, or living on their properties via emergency temporary RV permits. There are nearly 200 people still being sheltered in a variety of area hotels through the Oregon Department of Human Services.”

Those interested in helping CHF with the Budget Inn Motel renovation project and shelter should visit the CHF official website for position updates.  Questions or comments can be directed to [email protected].

“[The family originally owning the hotel] saw a need for [the shelter] in the community, and so I think that’s part of the reason they decided to sell,” Myhre said. “We’re so grateful to them for considering the opportunity for working with us; it’s a lot to let go of your business.”