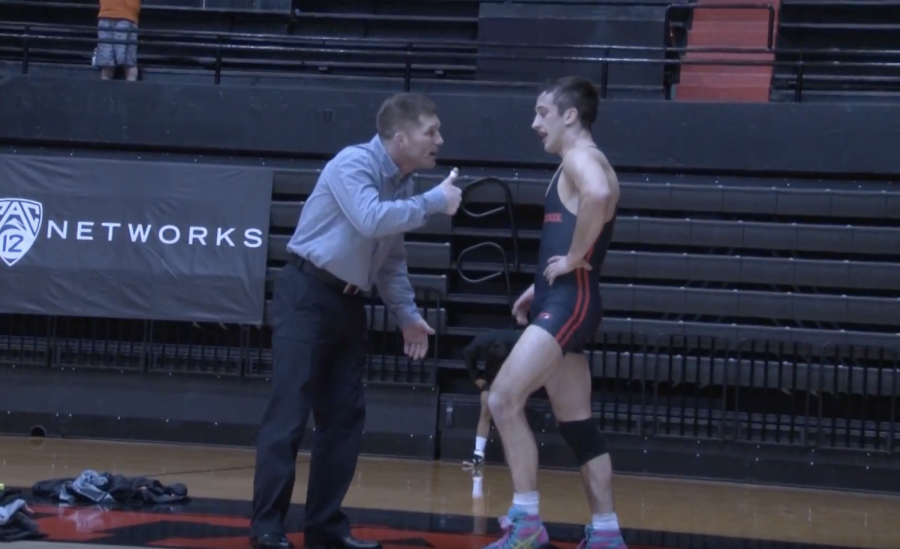 OSU wrestling pulls off the upset against Stanford

One Oregon State wrestler has a particularly high degree of confidence going forward into the rest of the year.

After an upset win over Stanford, Oregon State (2-5, 1-0 Pac-12) looks to avenge last year’s loss to Arizona State (7-4, 0-1) this Sunday. Redshirt sophomore Corey Griego believes his team can turn their season around this week against the Sun Devils.

“I feel really confident, it’ll feel good to beat Arizona State because I’ve never seen our team beat them in a dual,” said the 197-pounder. “My true freshman year we lost, year before that we lost, so it’ll be good to beat them this year.”

But before the Sun Devils come to town, the Beavs must first travel to Boise for a dual with the Broncos. Head Coach Jim Zalesky just wants his guys to keep progressing coming off of their most recent win.

“You know this time of year, every meet you want to keep progressing more and more, getting better and better,” Zalesky said. “You don’t want to take a step back, either as a team or as an individual. We gotta use this to kind of springboard us, and keep going forward with it.”

After the annual Border War in Boise, the Beavers return to Gill to host Arizona State. OSU will be looking for its home crowd to provide a boost yet again on their own mat.

“I think definitely the crowd helped us,” said Assistant Coach Kevin Roberts. “Being home for the first time in two and a half months… maybe we didn’t even realize that until after (Monday) what a blessing that was.”

Roberts also reflected on the win over Stanford, and how that could potentially be a turning point going forward.

“So much a part of sports is momentum,” Roberts said. “(Wrestling) is a sport that has a big individual component to it, obviously, but it’s still like all other team sports: we’ve got ten guys who have to go out there and do their job, and if they do that, the team scenario takes care of itself.”

Much of this can be taken into account going forward, especially with the revamped lineup Zalesky introduced for the first time Monday night. The change involved adding a redshirt freshman Seth Mcleod, a Boise State transfer, in at the 184 weight class, which allowed true freshman Bob Coleman to drop down to his natural weight, 174.

“That’s going to be our lineup right now,” Coach Zalesky said. “(The 165-pound weight class) is still in the air between Rodney Williams and Weston Dobler, but as for the other guys, that line-up’s pretty much set.”

Zalesky likes the way the team performed with the new lineup, and thinks they will be very competitive in the Pac-12.

“These (conference) matches are important. Any time you wrestle a conference foe… you gotta be ready to go,” stressed the head coach.  “It’s big for conference seedings down the road, when we wrestle at conference in three weeks.”

But before the conference championship at the end of the month, the Beavers still have five Pac-12 matches to play out, two of them this weekend.

The match in Boise starts at 6 p.m. on Friday. The next home match will take place Sunday in Gill when the Sun Devils come to town. The dual meet will start at 1 p.m. and will be televised on Pac-12 Network.