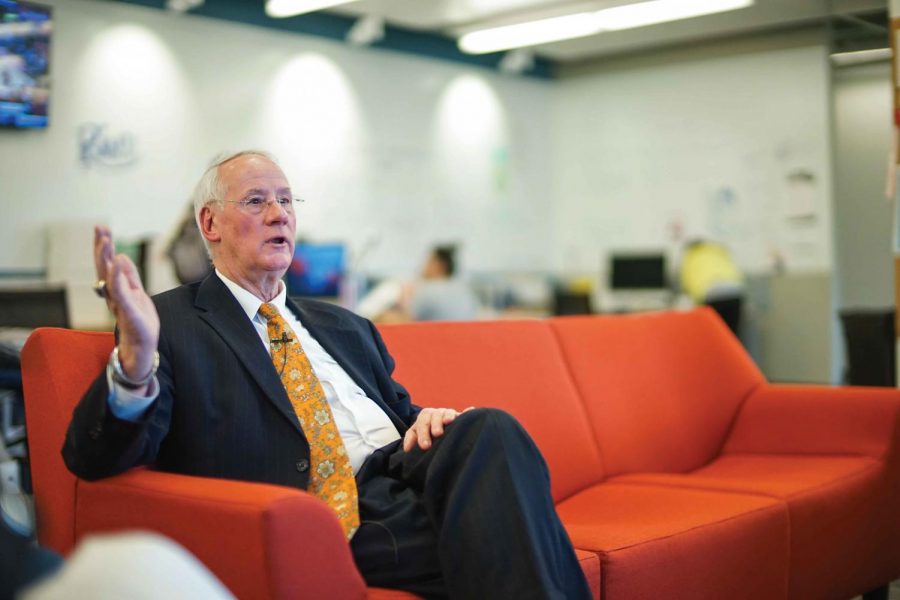 OSU President Ed Ray sits in the Orange Media Network Newsroom and discusses the 2016 State of the University Address.

Oregon State University President Ed Ray delivered his annual State of the University Address on Wednesday at the Oregon Convention Center in Portland to a crowd of over 750 people.

“As we prepare to celebrate our 150th anniversary as Oregon’s statewide university, you can count on this: Oregon State will continue to serve others while having a meaningful impact throughout Oregon, the nation and the world,” Ray said.

As part of that commitment to impacting all Oregonians, Ray discussed Oregon State’s new satellite campus in Bend, an upcoming marine research center in Newport and OSU’s many online degree programs.

President Ray also took time to look back on Oregon State’s achievements in 2016. Last year, 6,406 students graduated, and last fall 8,006 new students arrived. Of the new students, 78 were Presidential Scholars, 47 percent had a high school GPA of 3.75 or higher and 23 percent were first-generation students.

Students already part of the university were mentioned as well, especially those currently conducting groundbreaking research.

“Grant-funded research at Oregon State last year totaled a record $336 million – a nine percent increase over 2015, which also was a record year. As a result, the economic and societal impact of OSU research, in Oregon and globally, exceeded three quarters of a billion dollars last year,” Ray said.

Despite his positive overall message, President Ray recognized that OSU is not without its concerns, especially regarding student retention and graduation rates. He explained his key proposal to address this problem, the Student Success Initiative. By 2020, OSU intends to raise first-year retention rates for all undergraduate students to 90 percent and six-year graduation rates to 70 percent.

President Ray also touched on the economic inequalities that can affect a student’s ability to complete their degree.

“While all of our graduates represent the future of Oregon, the nation and the world, it is simply not acceptable that some students have opportunities and others do not,” President Ray said. “Today, I am pleased to announce that OSU Foundation’s Board of Trustees has committed to raise $150 million to support the Student Success Initiative. As of today, I can report that the Foundation has raised more than $50 million toward this goal.”

“Undaunted, Oregon’s seven public university presidents are seeking a $100 million increase in state operating funds for the 2017-19 biennium to maintain educational quality, student programming and to contend with the cost of state-mandated employee benefits,” Ray said.