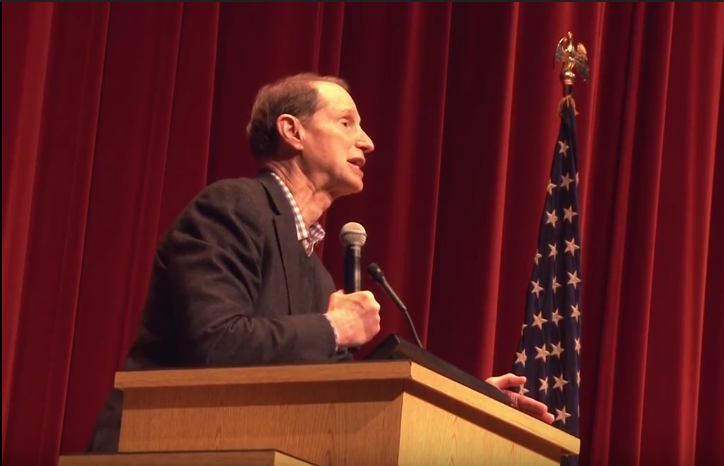 The house was full at the LaSells Stewart Center on Monday, Feb. 20 as Sen. Ron Wyden (D-OR) held one of his many recent town hall meetings.

Sen. Wyden began by asking the audience how many of them had never been to a town hall before, and a large majority of hands shot into the air.

“I think that pretty much states it all…I just want you to know that I believe that this is what the founding fathers thought was a representative democracy,” Wyden said after seeing the results.

He joked to the many new faces that he talks for a full 40 minutes before opening up to questions. The audience laughed when he pointed out the people who had thought he was serious.

“This is part of a pledge that I made to Oregon when we were choosing our person for United States Senator, I said ‘If I have the honor to being chosen, we’ll throw open the doors of government,” Wyden said. “I’m not going to be using any teleprompters here or reading any kind of speeches or anything like that. This is really a time for me to listen, to respond to your concerns.”

Sen. Wyden kept his opening speech brief in order to answer as many questions from the audience as he could during his hour and half time slot. Constituents brought up issues regarding the Affordable Care Act, race and the perceived federal government attack on science.

Not all the audience members agreed with what he described as an open representation of all voices. Though the event was open to the public, who got to ask questions was determined by a lottery. For Centro Cultural Cesar Chavez Graphics Designer Elena Ramirez, this process produced a poor representation for the voices of people of color.

“I was here because as an employee of Diversity and Cultural Engagement, we have to be here because it’s important to have our voices represented,” Ramirez said. “Nobody of color asked questions. I get that it’s by lottery, but I think it says a lot about the audience press reports.”

For community member Andrew Gray, who held a sign stating ‘No GOP-SCOTUS Nominee’, the town hall was an opportunity to make sure that he got his own message across to the senator.

“I feel pretty strongly about the Republicans who pulled a fast one violating the Constitution by not even considering a nominee when the Supreme Court was open for over a year,” Grey said. “I’m tired of the Democrats constantly rolling over and playing dead and talking compromise.”