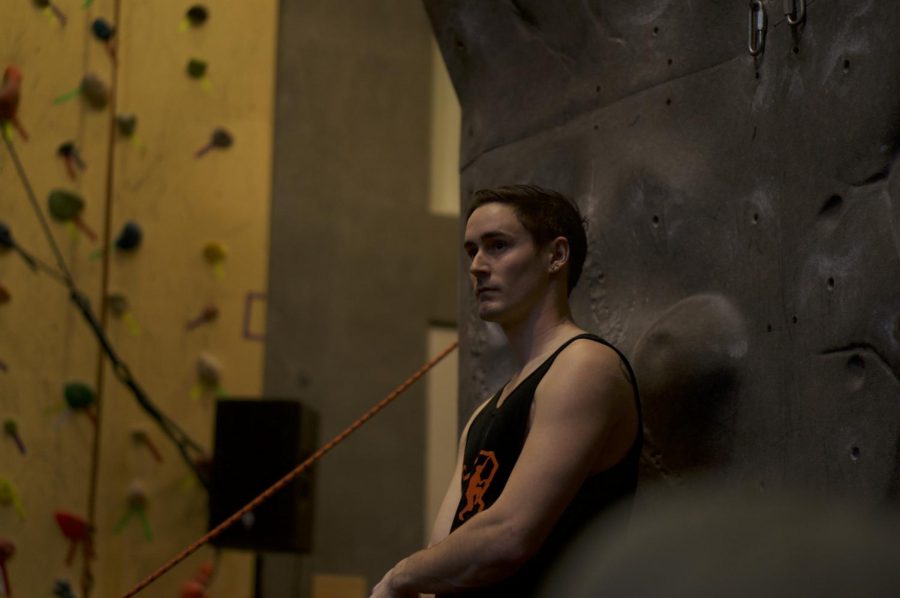 A record number of climbers gathered for Vert Fest on Saturday in McAlexander Fieldhouse on the Oregon State campus.

The event was split into two parts, a morning qualifying round for the beginner, intermediate, advanced and open categories, and an evening open finals segment.

The event is centered around competition, but after a full day of climbing and falling, successes and failures, camaraderie is hard to avoid.

“I’ll go climb outside just on my own free time and I’ll run into students from another school that I’ve met at one of the [competitions] or some of the other staff will climb, so they are interacting with the climbers outside of the [competitions] as well,” said climbing and wilderness skills coordinator, Ty Atwater. “Which is kind of what we were looking to foster is this greater sense of community.”

“My favorite part about the morning was catching up with the people from other teams that I got to know last year,” said Mason.

The unsung heroes of the Vert Fest were the loyal Adventure Leadership Institute (ALI) staff who designed routes and made sure the event progressed without any problems.

“This has probably been the smoothest Vert Fest that anybody could remember in a long time,” said John McMahan, an OSU student and ALI staff member. “It went along without a hitch. We were done early with just about everything, so that was kind of a big surprise.”

McMahan and the rest of the staff put in many hours to make Vert Fest possible, some of them nearly reached 40 hours of work from Wednesday to Saturday. Their hard work paid dividends to the climbers.

“This is one of my favorite competitions in the whole series,” said Mason. “It is always really really fun. There are just a lot of climbers here, which is really nice and the setting is really nice too.”

As a part of the Northwest Collegiate Climbing Circut (NC3), Vert Fest’s scores will be counted towards the championship. NC3 is a group of 15 schools in the Northwest who compete against each other every year in nine different events.

“We keep track of scores and team points and try to build some community amongst the climbers in the Northwest,” Atwater said of the origin of NC3. “It’s been really successful and grown every year.”

For the men’s open, Oregon State’s own Nick Edwards finished in first, nearly finishing a route that was designed to not be summited. The intention of the unclimbable route was to make sure the competition vetted the true champions. Whoever made highest on the wall was declared the winner.

“To see people excited about climbing this new problem that they haven’t tried before was really cool,” said Atwater.