Letter from the Editor: In response to President Trump’s immigration ban 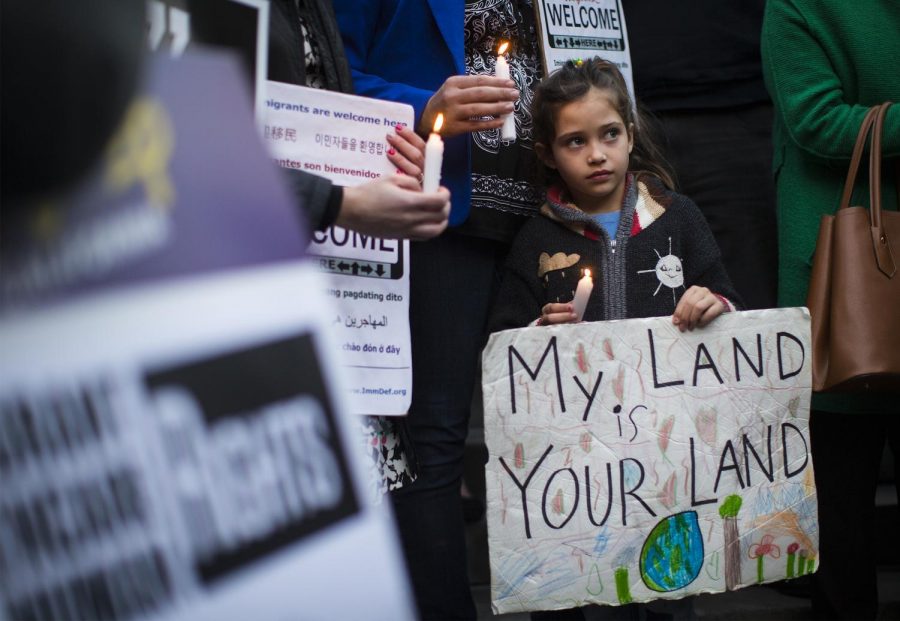 Maya Casillas, 7, joins in a vigil to protest against President Trump's executive orders on immigration organized by the Coalition for Humane Immigration Rights on January 25, 2017, at City Hall in Los Angeles.

This last Friday, the 45th President of the United States of America, Donald J. Trump, signed an executive order banning citizens of seven Muslim-majority countries from entering the United States.

According to 2015 data published by the World Bank, this equates to roughly 218 million people that are now banned from coming to the United States, based purely on their country of citizenship. 218 million.

President Trump’s actions have far-reaching national and global consequences, as evidenced by growing tensions both within the United States and around the world.

Almost immediately after the order was signed, foreign nationals began to be detained at airports in the United States, despite having cleared all legal checkpoints prior to boarding their flights. Protesters then began to file into terminals across the country, demanding that the executive order be taken back. Coming just a week after over 3 million people took to the streets for the Women’s March, these protests continue to add to the voice of solidarity, unity and resistance echoing around the country in the wake of Trump’s inauguration.

Locally, though, this executive order on immigration has a direct impact on the OSU community.

According to the OSU Enrollment Summary for Fall 2016, OSU had students from six of the seven countries named in the ban. The summary, put together by the Office of Institutional Research, based this data on a student’s country of citizenship—the same criteria President Trump has established to determine whether or not a person may enter the U.S.

For the fall of 2016, there were 95 students from Iran, 31 from Iraq, 14 from Libya, 2 from Sudan, 0 from Somalia, 1 from Syria and 3 from Yemen attending OSU. That’s 146 students total. One hundred forty six students who have sat beside you in chemistry lecture, who have played soccer with you on the IM fields, who have lived across the hall from you in the dorms. These are 146 students that are here at OSU for the same reasons you are—to pursue a higher education and better themselves and the lives of their loved ones.

But now, these students are unsure if they will be able to continue with their schooling in the United States because of our president’s actions.

In a time where objective, in-depth journalism is becoming increasingly important for the education of society, and fact and truth are being disregarded by the highest officials in the country, we have a immense responsibility at The Baro and Orange Media Network to continue to cover the entire community. There is power in the press, and we understand this.

Regardless of any “alternative facts” that are being thrown around right now, the actual fact of the matter is that just because you are a citizen of a country outside of the United States, that does not mean you are a threat to this country.

No matter what country you are a citizen of, we will continue to tell your stories. Everyone in the OSU community deserves that. Yet, now more than ever, there is an especially important need to highlight those burdened with the growing adversity of being an international student and the struggles that come with.

Simply, what determines your worth is not the color of your skin, the country you were born in, what religion you practice or if you are fleeing your homeland to escape civil war, political unrest and unsafe living conditions; it is your actions and character.

To the 146 students that are now facing uncertainty as to whether or not they can return to the United States to continue their education here at OSU, know that we are here for you. Each one of you are a member of the OSU community, just as I am myself, as well as the 30,000 other students that are a part of this university. You belong here just as much as any of us.

We will not forget you. We will not cast you aside or label you as dangerous or outsiders. We are on your side.

The opinions expressed in Youngman’s column do not necessarily reflect those of the Baro’s or OMN’s staff.