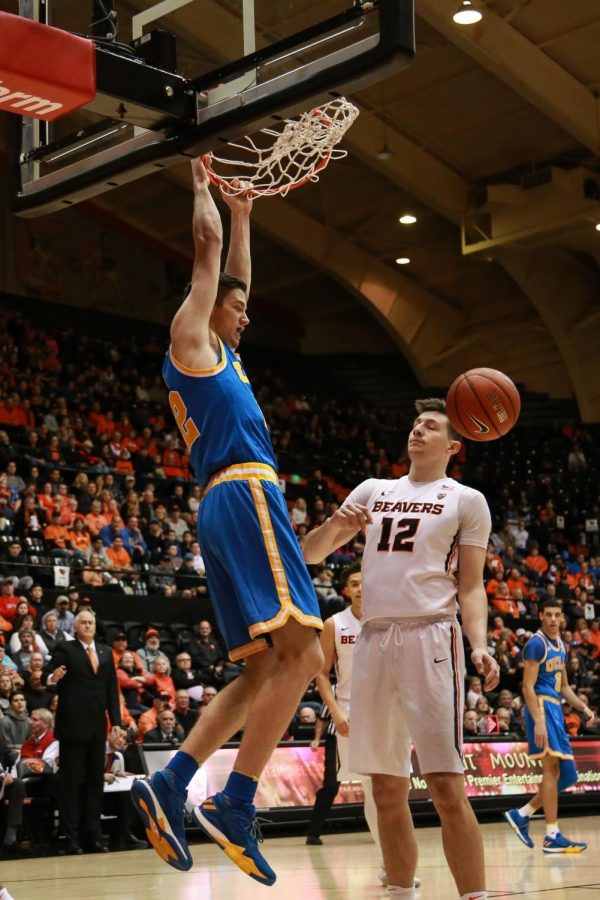 For the past decade or so, when the New Year begins the students of Oregon State University are typically looking ahead to the start of baseball season. They could be anticipating how the team will respond after a rare miss on a postseason play a year ago. Or, Beaver fans are just ready to watch one of the school’s elite athletic teams compete–even as basketball is already in full swing.

Baseball has the National Titles, trips to Omaha, and sustained success. Head Coach Pat Casey consistently fields teams capable of winning the Pac-12 and competing at the national level. In contrast, the OSU basketball team went through nearly 30 years of being irrelevant in the national spotlight. It’s no surprise, then, that even in the middle of hoops season, OSU fans are asking the question: “Is it baseball season yet?”

While it seemed that the rest of the world was ready for 2017, the Oregon State men’s basketball team probably wishes the calendar had never flipped. In 2016 they looked like the team that would finally break the 26-year drought of not reaching the NCAA tournament. They eventually broke through and entered the tournament, only to lose their first game to Virginia Commonwealth University, 75-68–in large part due to the play of their ballyhooed freshman class of Tres Tinkle, Stephen Thompson Jr., Drew Eubanks and Derrick Bruce. In 2016, few people were asking when baseball season started. In 2017, they are (season opener is on Feb. 17, if you did not already know). With 13 losses and only four wins in the first two weeks of conference play, OSU basketball is heading in the wrong direction following last season’s trip to the NCAA tournament.

In Gill Coliseum they had one of the best home court advantages in the Pac-12 during Tinkle’s two seasons, when they only lost a total of five home games (two in 2015 and three in 2016). This year OSU has already suffered seven home losses, and unless Tinkle and Co. find a way to win four of their next seven home games, they will finish with the first losing season at Gill since the 2007-08 season when Jay John’s squad went winless in conference play. What explains the sudden fall from grace?

First off, it’s a very young team whose leadership is relying solely on the now-sophomore class of Tinkle, Thompson Jr. and Eubanks, having replaced nearly half of the team and not having the necessary talent or experience to replace the players that left. Tinkle is the team’s best player this year, in fact, one could make the argument that he became the team’s best player late last year before he suffered a foot injury that kept him out of the Pac-12 and NCAA tournament play, as well as sidelining him for the majority of the offseason.

In the six games that Tres Tinkle played this season, he flirted with a double-double. Averaging a team-high 20.2 points to go with his 8.2 rebounds and two steals per game. With five of OSU’s losses coming by less than 10 points, having Tres Tinkle in those game could have easily altered those outcomes.

Not only is the team without their top scorer, but their depth took a hit when last year’s senior class graduated.

The loss of Gary Payton II is the big one. He was named Pac-12 Defensive Player of the Year in each of his years in the Orange and Black; he was able to affect the game in many different ways on the defensive end through steals, blocks and playing the passing lanes as the team’s point guard. He did something the first Gary Payton never did at Oregon State: lead his team in points, rebounds, assists and steals. Plus, being the son of a Basketball Hall of Famer, Payton II brought a coolness factor to the program that ‘s hard to replicate.

As much of a power source Payton II was for the Beavers, there were four other seniors–Daniel Gomis, Langston Morris-Walker, Jarmal Reid and Olaf Schaftenaar–who ran out of eligibility. Ultimately, this wasn’t a transcendent senior class. Ten years from now you’ll likely reminisce about Reid intentionally tripping an official rather than the 4.1 points and 2.1 rebounds he averaged his senior year, or Schaftenaar’s lack of defense rather than his occasional heat-check moments from behind the arc. But they still managed to win the first 15 home games, 17 games total and upset an Elite Eight Arizona team.

Two underclassmen left the team as well. A month after OSU lost to VCU in the first round of the NCAA tournament, the Beavers lost Derrick Bruce, who caught fire in the postseason, scoring 25 and 15 points in OSU’s final two games, respectively. Bruce leaving the program was only worsened when Malcolm Duvivier, who made 62 starts and averaged 10.7 points, 3.0 rebounds and 3.5 assists his sophomore year, left before his final season.

Last year’s team had depth: all nine players who averaged at least 10 minutes per game scored more than four points per contest. This year, of the 12 players that average over 10 minutes a game, eight of them average less than 4.0 points per game. This season, the Beavers are operating without their best player, and without the necessary depth to counterbalance losing nearly half of their roster. In the last six games, OSU has scored a total of 38 points (27 of them coming in two games).

When Duvivier and Bruce were still on the squad, there was less playing time for first-year guards JaQuori McLaughlin and Kendal Manuel, each now playing more than 25 minutes per game. In the long term, it could be important that McLaughlin and Manuel are able to play for significant minutes as freshmen; one day their extra experience could pay off.

The rest of this season of OSU hoops will be worth watching, if only to see how they respond if the losses continue. Or, could they emulate what the football team did this past season, and continue to grow and compete while finishing on a high note?

If that happens, I won’t mind putting a pause on the baseball season.