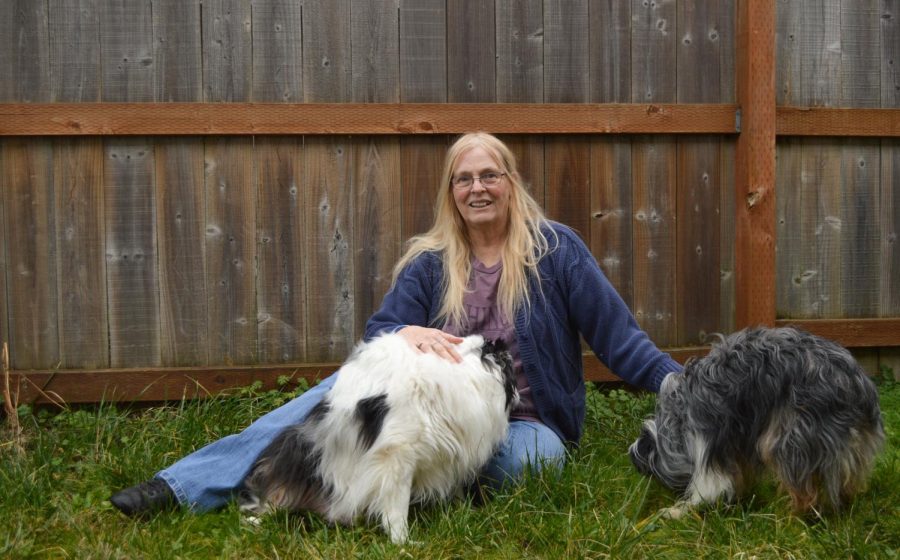 Dodi Reesman sitting with her dogs Capone (LEFT) and Dillinger (RIGHT). The house Reesman lives in has been sold and she is being evicted. Her students are trying to help.

Emily Mangan had just left class when she received the text messages.

The first one was not meant for her. It was a frantic message from Mangan’s mother, describing blood everywhere and preparation for surgery. The next one was apologetic, and said the previous message was meant for her father.

The Oregon State University College of Veterinary Medicine student went home, confused and terrified. Once in the silence of her house, Mangan felt the desperation surround her. Her family was 54 miles away in Pleasant Hill, Oregon, and there was nothing she could do to help.

The head adviser of the OSU Animal and Rangeland Science Department remained collected as she talked Mangan through her options. She offered to come over and support the student, and even proposed driving Mangan back to Pleasant Hill that night.

Reesman has personal experience with desperate situations. Her son was murdered in 2005, and her personal tragedy allowed her to calmly help Mangan when she was terrified. After her son’s death, Reesman found herself working longer and harder as an escape. Working with students in all areas of their lives allowed her to focus on something other than her grief, according to Reesman. She became more invested in her students’ lives and needs, offering advice and help whenever possible.

“I can talk to kids about anything: alcohol, drugs, death,” Reesman said. “I don’t think of it as being nice, I think of it as the right thing to do. If I have the ability to help someone, I will. My door is open 99 percent of the time.”

Reesman began her time at OSU as a secretary in 1974, and eventually started to pick up work as an advising assistant. After a few years she was promoted to the position of adviser, and in 2016 Reesman was promoted to head adviser of her department. These years of experience have made her a well-informed and highly successful adviser, according to her colleague and fellow adviser Janell Johnson.

“She’s the hub of all knowledge,” said Johnson.

Sometimes, advising can be difficult. According to Reesman, she will often have to explain to students that their goals, such as going to graduate school after OSU, are no longer achievable, usually due to low grades. However, she tries to set students up for success by figuring out a plan early on.

“Kids aren’t numbers to me,” Reesman said. “I care about them and their success.”

“She’s incredibly candid and straightforward about what you need to do. She’s not going to sugarcoat things, I appreciate that,” VanHoesen said.

Reesman is favorable to students because of her connection with them. Students can comfortably confide in her about any and all issues they may be experiencing, according to Mangan. Students both in and outside of Reesman’s department visit her frequently. They come to her office with academic and personal issues, said Reesman.

“She’s always there for you in all facets of your life. She’s awesome about helping you out, but never crosses boundaries of professionalism,” Mangan said.

“I come to her for so many things, outside of educational purposes,” added VanHoesen. “Going to her is like going to my mom.”

Recently, Oregon State students have had the opportunity to help Reesman in return for her devotion to them.

The house Reesman has rented for the past nine years was recently sold, and the new owners are evicting her at the end of March. With two dogs and five Persian cats, it is unlikely Reesman will find a new place to rent. She wants to purchase a home.

With a desire to avoid disrupting her work with a rushed move, Reesman reached out for help from Mangan, who had the idea to create a GoFundMe page.

“Hearing her be unsure of what steps she was going to take with housing shook me, as she’s never been unsure of anything,” Mangan said. “But a lot of people in the community have helped.”

As of Sunday, Jan. 29, the GoFundMe has raised $1,290 of its $6,000 goal. Seventeen people have donated in the past 21 days, in amounts from $20 to $500. Students are willing to help Reesman because of her work as an academic adviser, as well as her compassion and personal influence, according to VanHoesen.

“She’s always doing stuff for other people and never asking for anything back,” VanHoesen said. “She deserves something in return.”

If you wish to contribute, Reeseman’s GoFundMe can be found here. A Facebook page tracking donations and the developments of Reesman’s situation can be found under the title “A Down Payment for Dodi.”