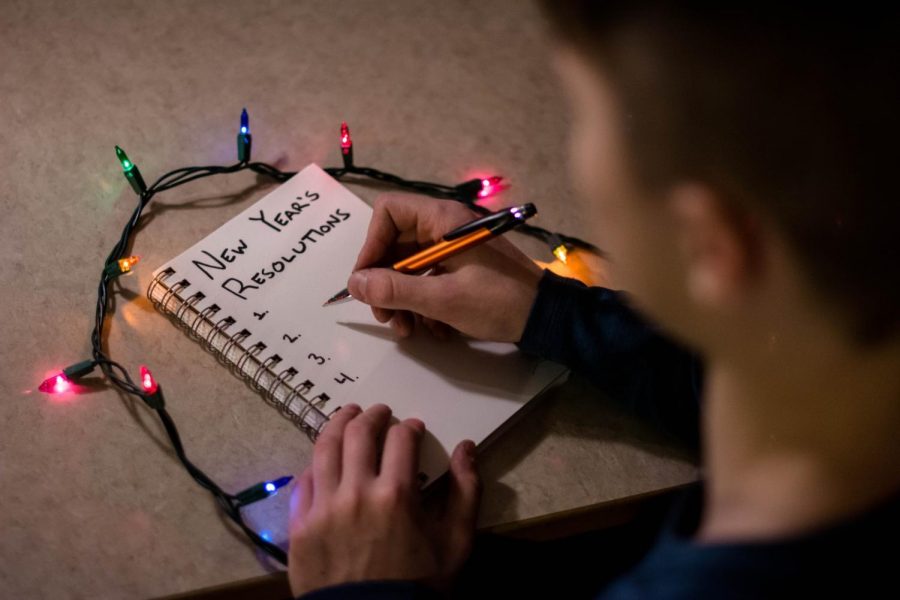 According to the Statistic Brain Research Institute, 41 percent of Americans make New Year's resolutions yet only 9.2 percent stick to them.

In the United States around 41 percent of Americans make New Year’s resolutions, according to the Statistic Brain Research Institute, and people who make resolutions are ten times more likely to attain their goals.

The History Channel credits the Ancient Babylonians for starting the trend. They made promises to earn the favor of the gods at the beginning of each year. Over time, the practice of making new goals for the new year spread throughout many cultures.

Carolyn Aldwin, a professor at Oregon State University’s school of social and behavioral health sciences, said social media and peers can play a huge role in why people make New Year’s resolution in the first place.

“There is a great study showing that people’s health behavior habits were at least partially a function with social network. People on social network (sic) tend to have an effect on you,” Aldwin said. “If all of your friends are going on a morning walk to lose weight, maybe you would go with them. Most people want to fit in. People tend to adopt values and behaviors of people in their immediate social network.”

Third year kinesiology student Andrew Lake has noticed the New Year’s resolution trend, and has even made a few resolutions himself.

“I probably have made New Year’s resolutions twice. I think when you’re younger, I would always dream about big picture things but now as I’m older, I make them step by step towards progress for a bigger goal,” Lake said. “I think generally they are not very helpful, and I think it is a social norm to have one, but not really to keep them. I think it is something people should have more frequently than every new year.”

Professor Karen Hooker, the co-director of the school of social and behavioral health sciences, has been studying goals and their motivational aspect for over 20 years.

“I think there is some social pressure to do so. ‘A new year, a new me’ is a catch-phrase that captures this. A NYR may be seen as a way to reverse some of the less-than-ideal health behaviors that seem to be associated with the holidays,” Hooker said.

Hooker digs deeper when it comes to New Year’s resolutions and how they can be accomplished.

“It’s often said that goals have to be specific and measurable so that you know when you’ve met them. On one level, this is true, and it is better to have goals that you can clearly measure and accomplish,” Hooker said. “However, goals also have to be meaningful, to be adhered to in the long run. Research has shown that establishing a habit takes several months, and so having the intrinsic motivation that comes with a smaller, daily goal contributing to a larger identity goal is important for long-term adherence.”

According to the Statistic Brain Research Institute, only about 9.2 percent of people actually stick to their New Year’s resolutions goal for the entire year.

Aldwin attributes stress as an important factor of people’s inability to follow through with their New Year’s resolutions.

“Usually people’s good resolutions fall apart in the context of stress… you go to exercise at the gym but then you have deadlines at work and other activities,” Aldwin said.

“I do think it is useful to think about aspects of your life that you would like to change, and then work towards making changes to help realize your goal(s),” Hooker said.

This sentiment was echoed by Lake, who said “It kinda helps people be aware of what they want to focus on in the near future and just sitting and reflecting on the past year, what they could’ve done differently, and how that can translate to the next year.”