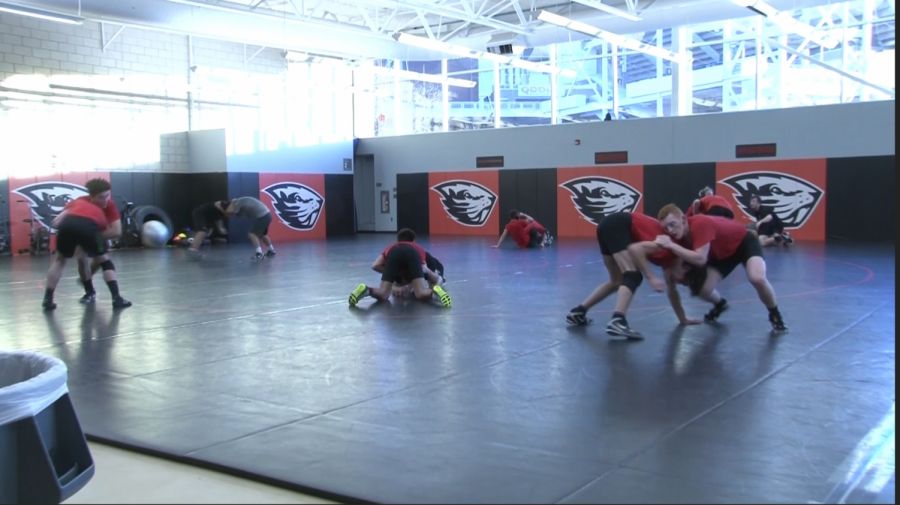 A disappointing season so far doesn’t mean the Oregon State Wrestling team is going to give up.

Redshirt sophomore Corey Griego had one of three individual wins for the Beavers on their two-match East Coast trip last weekend. However, that’s not his focus as he looks ahead to this week’s matchup with the Stanford Cardinal.

“We gotta be tough, you know,” said the 184-pounder. “We’re defending Pac-12 champs. That means something, I think. I feel like we gotta go out there and wrestle tough and have a little bit of a chip on our shoulder. We got our asses kicked; we got beat down, and that can’t feel good.”

Toughness is going to be a necessity going up against a team that is coming in at 7-2 on the season, fresh off an upset win over then-No. 14 Arizona State. This win has propelled Stanford to No. 20 this week in the national poll. OSU’s head coach, Jim Zalesky, has noted the Cardinal’s success going into the matchup.

“Stanford’s probably the team to beat in the Pac-12 this year, so it’s a big challenge for us,” said Zalesky. “Whoever sets the tone, we have to keep it going up and down the lineup.”

OSU (1-5) is now looking to upset Stanford, who is a perfect 3-0 in Pac-12 play this year, in the Beavers’ first conference match of the season.

Zalesky also acknowledges that the team has not had the success they wanted.

“The season’s not going the way you want it to as an individual or the team, which, a lot of the individuals aren’t having the season they want,” noted the head coach. “It’s gotta be attitude… have a positive attitude.”

However, one individual in particular is looking to motivate his team in his last season as a Beaver. Senior Joey Palmer hopes he can help the team improve going forward.

“I try to lead by example,” said Palmer. “If they see me working hard, they’re more likely to work hard. If they see me having success, they’ll be like ‘OK, I gotta do what he’s doing to have that success’, so that’s kind of how I try to lead.”

By “they”, Palmer is referencing what he calls a “pretty young team.” The team boasts 16 underclassmen that Palmer claims have “a lot more developing to do.”

“I’m just looking for them to compete hard,” reiterated the 133-pounder. “I just want to see them grow and get better. That’s all I want to see. Just see them end the year strong.”

Corey Griego also has something he wants to see from this young team on Monday.

“I wanna see a win,” said Griego with a smile on his face. “I wanna see some toughness and a win”

Griego and the Beavers hope to get that win on Monday night, hosting Stanford at home in Gill Coliseum. The match is set to start at 7 p.m. and will air live on the Pac-12 Network.