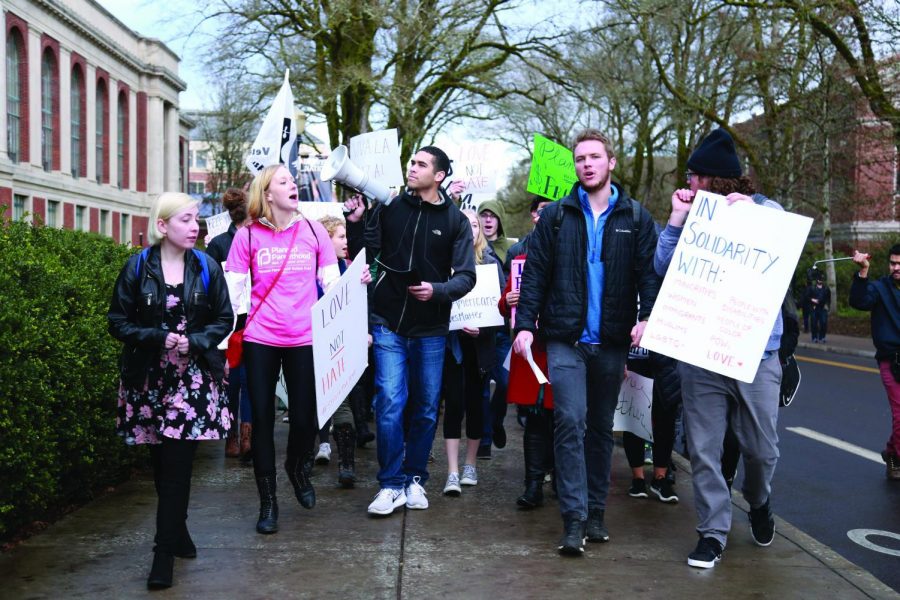 This was one of the slogans employed by marchers in the Oregon State University walkout Jan. 20, starting on the OSU campus and spreading throughout Corvallis. Several hundred students, faculty and members of the wider Corvallis community gathered in the Student Experience Center plaza and Central Park, before combining forces and walking through downtown Corvallis, ending at the riverfront and Odd Fellows Hall.

There were many different groups represented, and people from all walks of life. According to the event’s Facebook page, the walkout was inspired by disappointment in the election and inauguration of President Donald Trump.

Another unifying cheer was “rise, resist, love, create,” a distinctly non-violent rallying cry, in stark contrast to the protests that erupted into chaos and vandalism in Washington, D.C. earlier that Friday morning.

“There’s been a lot of hateful rhetoric around the election,” Pitzer said. “I think that it’s important that we come together and we unite to show members of our community that just because we have a governing body that does not support all, that we have a community that will support all.”

One individual who did describe herself as an organizer was Corvallis resident Valori George, who has over thirty years of protesting experience. She was impressed by the diversity of the people at the event.

“Some people are on campus, some people are in the community, some people are just independent, some are (from) large organizations,” George said. “We all came together after the election to form ourselves into a tighter, more cohesive community. That hopefully will give people hope that not everyone is going along. This is not normal. We plan to resist.”

Resisting without violence can be used as a mechanism for creating change on a large scale, according to OSU associate professor of philosophy Joseph Orosco, who has witnessed several previous protests on the OSU campus.

“Protests can be a message that something is not right in the community, and that can spur discussion, debate and more action,” Orosco said. “Many of the benefits of our democracy and our way of life are due to the work of protesters who were willing to speak out, and many times they did not live to see the changes they wanted.”

“They created a space for imagining a world in a different way,” Orosco added. “Protesting is often more about sparking the social imagination that another world is possible.”

Another advocate for peaceful protests, Kurt Nightingale, a sophomore studying digital communication arts, has participated in protests for the past 11 years.

“When you’re protesting, no matter what people outside try to do to provoke you, don’t listen to that,” Nightingale said. “To stand without violence is powerful—if you let them provoke you like that, even verbally or physically, it completely undermines what you’re working for.”

Nightingale used the walkout to express his concerns about President Trump’s inauguration.

“With Trump being inaugurated and xenophobia coming into power like this, which also as a Jewish man has happened before, I just want to help prevent anything similar to what happened to my people 80 years ago happening again, or letting the work that has been done for the LGBTQ community being undone,” Nightingale said.

“Let the students figure out for themselves what they are hearing, and what they believe in,” Plaza said. “That’s the way it always should be. I think young people are old enough to figure it out.”

“I’m absolutely proud to be in this march,” Plaza added. “Being present is really important in terms of what statements you make about who you are.”

OSU student clubs were represented at the walkout as well. Eight members of the OSU Philosophy Club were present at the demonstration. The club displayed a sign that read “Make America Think Again.” Philosophy Club adviser and OSU professor of philosophy Dr. Sharyn Clough reflected on the club’s stance on the new president.

“We’re against some of the things Trump stands for, especially anti-intellectualism and a claim that academia is a group of elites that are out of touch,” Clough said. “Insofar that we associate that with Trump, then this goes against that.”

“Trump has been known to be degrading towards women, and to be inappropriate in his actual physical actions with women and his attitude towards women,” Barker said.

Barker made her own “pussy power hat”—a pink hat with pointy ears—to wear to the protest, along with several other women in the walkout.

“I believe that we are wearing them (the hats) to say it’s inappropriate behavior, and his attitude towards women is demeaning, and that I fear for our rights as women, and gay people, lesbian people, people of other religions and people who are different. I fear for them, and for everyone.”

Not everyone at the walkout participated alongside Barker, or believed that Trump’s message was one of fear.

A small group of members of OSU’s College Republicans club were present at the walkout. Freshman in environmental sciences Collin Contardi was not engaging in the protest, rather observing from the side, wearing a “Make America Great Again” hat.

“I’m here to witness the left’s march to protest the inauguration of Donald Trump,” Contardi said. “That’s their right and I’m glad they are doing it. A strong left can finally face a right that wins in the marketplace of ideas, but hopefully the left will become stronger.”

Along with Contardi, Trump supporter and freshman Bodey Bodenhamer was also not a participant.

“I went up and challenged him on this idea, saying, ‘Deporting fascism would be silencing the opposition, and how is that in of itself not fascism?’” Bodenhamer said. “He didn’t have an idea for me, so I’m hoping that he can realize that his sign might be hypocritical.”

With such different opinions represented, some would anticipate conflict. Bill Hayden, a member of the National Lawyers Guild, was present to ensure any violence was documented. As a legal observer, Hayden works with the Defense Center in Eugene, monitoring protests throughout the state of Oregon.

“I’m bound to be neutral, and can’t participate in the activity,” Hayden said. “My role is to take as much information as possible, including pictures and possible voice recordings, and get the names of people, witnesses and police involvement if things start to turn violent.”

After the protest, Hayden and the two other legal observers monitoring the OSU walkout were required to fill out a document to turn into the legal offices at the Defense Center. However, Hayden did not record any violent incidents during the OSU walkout.

“Things so far look good, and we hope that everything runs smoothly,” Hayden said.

The protest drew Corvallis high school students as well. Crescent Valley High School senior Hannah Gilbert found out about the OSU walkout through her mother, and brought members of the CVHS and Corvallis High School combined Speech and Debate Team to the protest.

“I think it’s really important in a political climate like this to make your voice heard and to not be silent,” Gilbert said. “It’s really easy to just stand by and watch everything go by, whether you agree with something or don’t agree with it, but just not normalizing the sort of stuff that’s going on and making sure that it isn’t just accepted without anyone saying anything is really important.”

Gilbert’s sentiments were shared by community member Stephanie Hampton, another organizer of the event and a retired vocational rehabilitation counselor.

“No nation prospers if the people ignore what their government is doing,” Hampton said. “We have to have people engaged to make sure that the politicians know that we’re aware.”