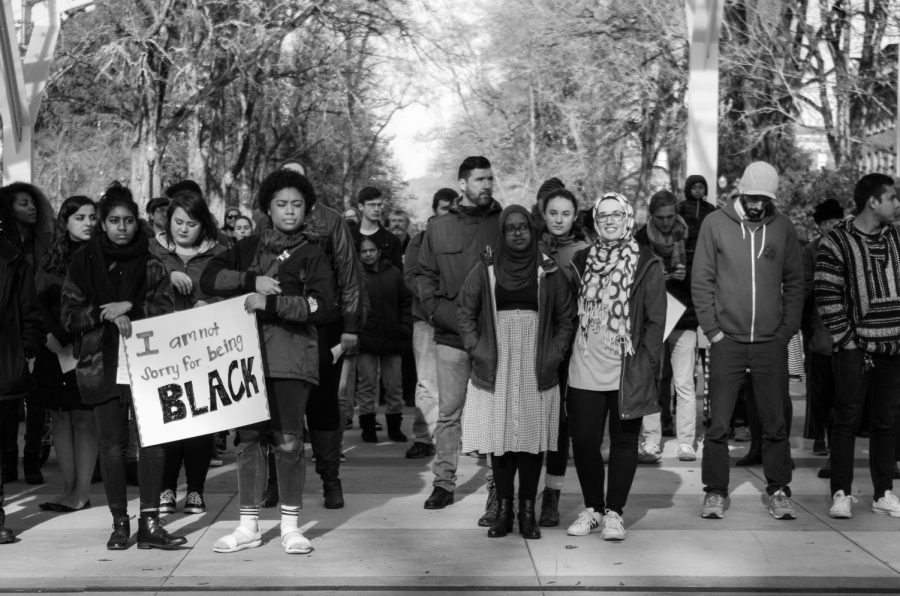 Members of the OSU community stand and listen to the closing remarks from MLK Jr. celebration peace march.

“Decoded,” a web video series from MTV News, uses comedy to explore the intersection of pop culture, personal identities, racism and social justice. Ramsey, also one of the writers of the show, focused her presentation on recognizing privilege, owning one’s mistakes and working towards a

Ramsey used her varied experiences to shed light on her rise from graphic designer to the role of activist and comedian. She emphasized the importance of growth, change and learning through experience.

“It’s really important for us to be self-reflective, but also be really honest about where we come from.”

Ramsey went on to share her personal experiences in making up for mistakes caught in the public eye. She emphasized that making amends for those mistakes requires not only acknowledging the misstep, but an additional commitment to changing your behavior.

“I want to reaffirm the simplest and clearest terms that Oregon State’s mission of inclusive excellence in teaching, research, outreach and engagement has not changed and will not change,” Ray said.

The co-recipients of this year’s Phyllis S. Lee Award were Dr. Larry Roper, Interim Director and professor in the School of Language, Culture and Society, and the late Oscar Montemayor, who passed away last year after three decades of work dedicated to OSU.

Monday’s events came after Saturday’s day of service which kicked off this year’s Dr. Martin Luther King, Jr. celebration; a number of events are slated for the remainder

of the week. Information can be found on the Oregon State website.