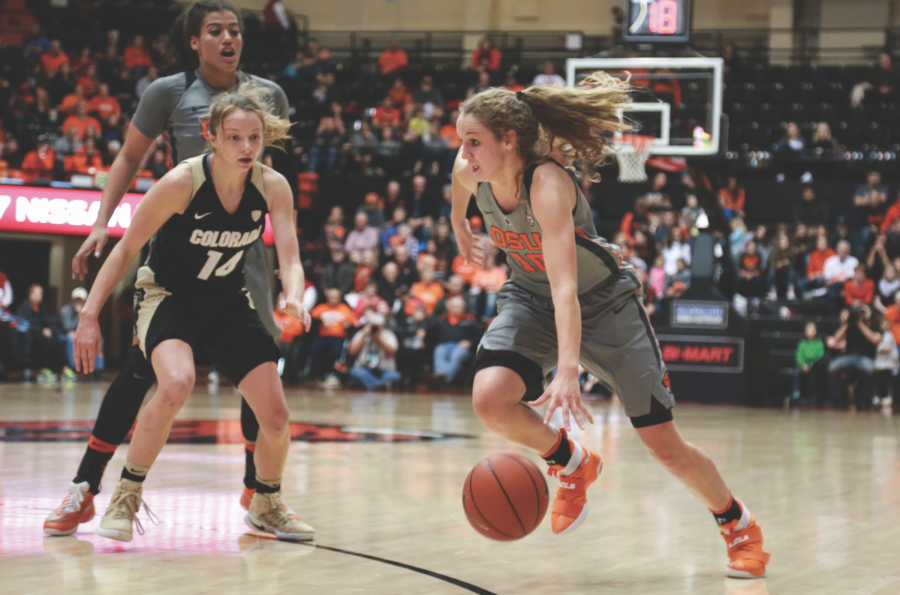 It was business as usual this past weekend for the Oregon State Women’s Basketball team, winning both games by a combined average of 25 points.

In total the Beavers led for a combined total of 70 out of a possible 80 minutes.

OSU (18-2, 7-1 Pac-12) kicked off the weekend back at home for the first time following a two week road trip against the Utah Utes.

Utah (13-6, 2-6 Pac-12) managed to stay competitive against the Beavers throughout the 1st quarter as they trailed by just four points 18-14.

The Beavers were quick to increase the pace in the 2nd however, as they went on to outscore Utah 21-8, behind four made 3-pointers in the quarter taking a 39-22 lead.

OSU was able to maintain their hot shooting for most of the night, finishing 48 percent from the field and knocking down a total of 10 made 3-pointers.

Utah struggled to regain confidence following halftime as the Beavers defense managed to hold the Utes to only 30 percent from the field en-route to an easy OSU victory, 70-44.

“Utah is a team that is very similar to us in that they have a dominating inside player and surround her with guards,” said head coach Scott Rueck. “Overall, I thought we settled in and it was a great performance and win from top to bottom.”

Unlike the dominant presence Utah presents inside, Colorado prides themselves on their smaller guard play and quick 3-point shooting ability.

“Their guards are very talented and they feature them and while most teams play inside-out, this team plays outside-in,” said Rueck.

OSU struggled in the 1st quarter, matching Colorado’s poor shooting percentage from the field. Both teams shot just 6-for-16 at the end of the 1st as the Beavers clung to a 20-17 lead.

After a close 2nd quarter in which both team traded baskets, the momentum began to shift when senior guard Sydney Wiese drained a rainbow 3-pointer to end the first half, giving the Beavers a 38-29 lead.

Throughout the game OSU excelled in passing the basketball and playing unselfishly; assisting on 24-of-29 made buckets. Wiese would lead the team with nine assists behind all but one active player contributing at least one assist on the night.

The Beavers began to pull away following half time as the team outscored Colorado 28-18 and outrebounded the Buffs 9-5 in the 3rd quarter.

Sharpshooting would continue from the Beavers as they began to run the score up throughout much of the 4th quarter, leaving Colorado’s comeback chances in the dust as the Beavers would roll 81-57.

OSU would go on to out rebound Colorado by a margin of 17, well above the Beavers season average of out rebounding opponents by 11.4 per game, good enough for best in the Pac-12.

“That is a big number against this team for how scrappy they are,” said Rueck. “Going into the year, rebounding was one of my concerns and this group has really stepped up in that area. I thought it was a weakness early in the season and it’s clearly become a strength, so give this group credit for embracing and then running with it.”

Another field in which OSU dominated was by way of bench scoring, outscoring Colorado 40-18 from the bench in the game. Freshman guard Kat Tudor had the hot hand off the bench scoring 14 points by way of four made 3-pointers and matching a season high four assists.

“Having a good point guard is huge in getting open and having good players around you only helps to open the floor, which made for a good day of shooting,” said Tudor.

For just the second time this season, senior forward Kolbie Orum led the Beavers in scoring producing 16 points on 6-of-8 shooting. Orum also contributed four free throws and six rebounds, resulting in one her better played games of the season.

“We are maintaining the mentality of staying to our potential and not letting up, and being able to play true to our game,” said Orum. “A big focus has been boxing out against teams that feed off rebounding and so a huge concentration is boxing out, being tough in the paint and being aggressive.”