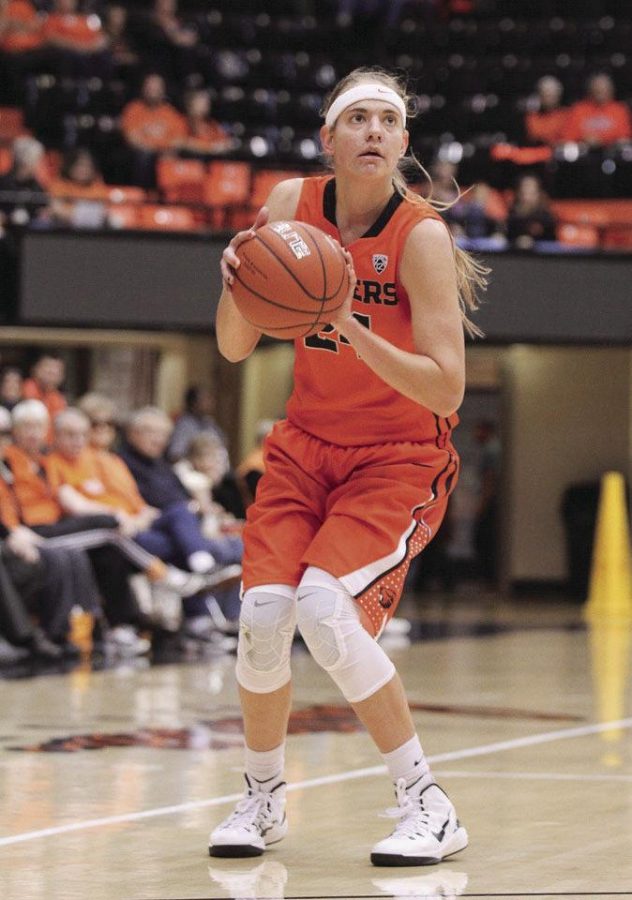 Senior guard Sydney Wiese boxes out during last year’s game against Concordia. After key players graduated last season, the Beavers are looking for other players to step up and fill their shoes this year.

“We learned a lot about ourselves and that we are going to be a tough out every single night just like we always have been,” Rueck said.

That game marked the first loss of the season for the No. 22 OSU women’s basketball team and made their record 3-1, something that didn’t happen until the ninth game of the season a year ago when the team made it all the way to the first ever Final Four Appearance for OSU. However, it came against a team that will be a tough contender for the rest of the regular season, and possibly

“I thought our identity started to form as a really gritty team,” Rueck said. “I think this will be another really good Oregon State team.”

The Marquette Golden Eagles were coming off of a win against No.23 Arizona State during the weekend, and had received a close loss to OSU last season where they held the lead in the fourth quarter. The somewhat inexperienced Beaver roster put up a lot of fight throughout the game even when faced with eight to ten point deficits at times, but as Rueck put it, “They (Marquette) just scored once more than we did.”

“We need to learn from all positions what we need to do better to get better as a group,” said senior guard Sydney Wiese. “I think this game was a blessing for us and we will use it going forward.”

The Beavers have faced challenges in finding a new identity for the team after graduating key players last season. After losing three starters and an important role player this season, they are looking for players to step up and take the team to that high level.

However, the way the team plays is changing in the process. The Beavers are playing with more grit this year especially from players like junior center Breanna Brown and freshman guard Mikayla Pivec. The Beavers are forcing loose balls and then following them on to the ground or out of bounds in an attempt to keep plays and fast breaks alive and keep their team fighting.

“We had a lot of new people on the floor down the stretch,” Rueck said. “There are three significant people that were not out there that have been out there in the past, so this is all new.”

One of the major contributors to last season’s team was center Ruth Hamblin. Hamblin set the Pac-12 record for career blocks during her senior year and was a consistent scorer in the middle of the court as well as a dominant rim defender during her time at OSU. Stepping in to fill her shoes are junior center Marie Gulich and Brown. Gulich has taken over as one of the Beaver’s go-to scorers posting double digits every game this season, and Brown has been a dominant shot blocker in her minutes on the court.

“It was awesome to see (Brown) and (Gulich) call for the ball, to really demand it,” Rueck said.

The team is planning on using that loss to really push themselves moving forward. With major players like Hamblin now missing from the lineup, a tough late loss like this to a good program could be a catalyst for small improvements.

“The fire is fueled now,” Rueck said after the game.

“Those kind of things (close losses) can be wake up calls,” said Gulich. “There’s a lot of stuff we need to get better at.”

The common theme for Rueck is that he is happy with seeing how much “grit” his team has been putting out this season. Whether it has been diving over chairs, forcing jump balls, getting steals, or getting big blocks around the rim, OSU has been playing with fire throughout the first four games of the year.

“We just have grit,” Rueck said. “I love the way we fought.”