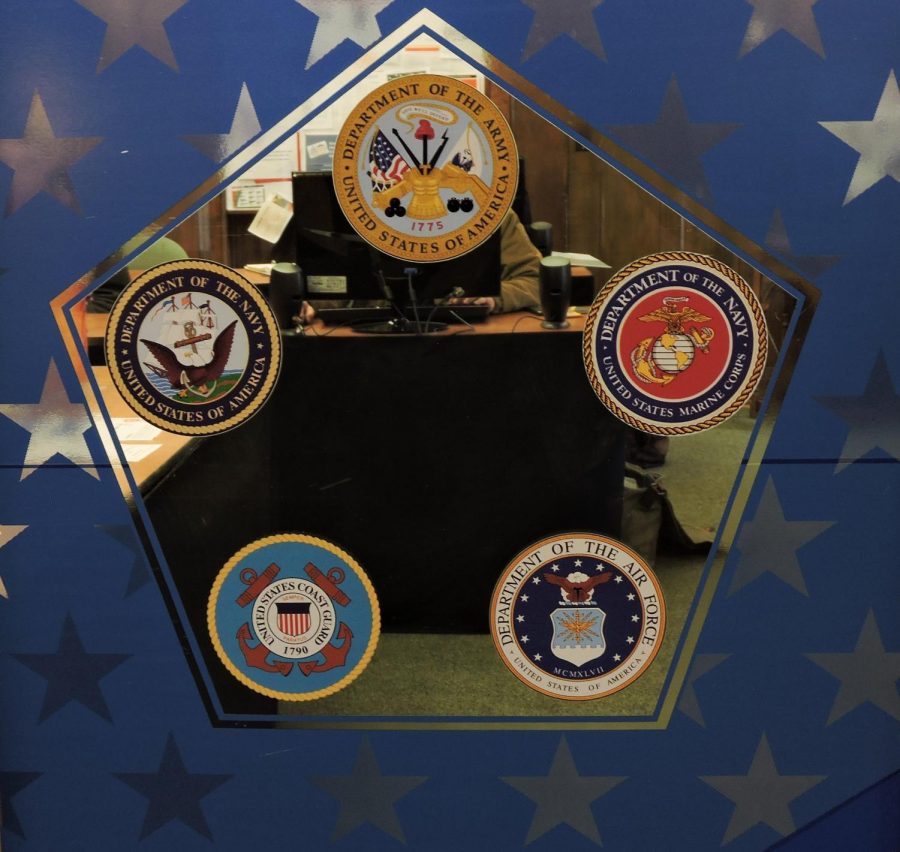 The entrance to the Memorial Union Veterans Lounge displays the five branches of the military inside the U.S. Pentagon.

Most students arrive at Oregon State University in September, to start classes in the fall after a long summer break. The first few weeks before classes begin, the population of Corvallis booms with people returning from studying abroad, internships, or Instagram worthy adventures. Others are coming straight out of combat zones, and within months are opening textbooks.

Between the e-campus student body and Corvallis and Bend locations, there are approximately 1,200 student veterans and their family members attending OSU. A veteran can choose to delegate their GI bill benefits to a spouse or child, therefore providing them with a higher education through their benefits.

Samantha Fergus is a student veteran who is dual-enrolled at OSU and LBCC and has immersed herself in campus organizations to help her transition into student life. She is the event coordinator for OSU’s Veteran and Family Student Association and the vice president for LBCC’s Veterans Association. Getting people involved with events and promoting an inclusive community is important for veteran transition into higher education.

“Many of us have seen and done things that most students haven’t,” Fergus said. “But you can’t look at someone and be like, ‘Oh, that’s a veteran.’”

The Military and Veterans Resource office in Snell Hall provides aid not only to the 800 veterans and eligible family members studying at the main campus, but also for all OSU locations. Though there is a department in Kerr Administration that works directly with the Veterans Association, the resource office serves as a way to connect students with a variety of services from food benefits to mental health counseling.

Most veterans and eligible delegates are older, non-traditional students. For example, OSU senior Chris Way moved to Corvallis this fall after transferring from Cascades to the main campus. His wife Naomi and their two toddler boys are along for the ride.

“As soon as we got to Corvallis we were in need,” Way said.

He immediately contacted Military and Veteran Resources Advisor, Willie Elfering, who was able to help get the Way family connected with community resources. Way has also been able to take advantage of VA workstudy by holding a student position at the Military and Veterans Resources office.

“It’s a revolving door,” Way said. “It’s been nice to receive and

Elfering has been working with the university to expand the resources available to veterans on campus. Recent renovations of the office in Snell will provide space for wall lockers, which will be especially helpful in assisting students with disabilities. Elfering also advocates for different rehabilitation and mental health practitioners from Eugene and Portland to come to campus. Unfortunately, there isn’t a set location available for use, so there isn’t dependable continuity of these services.

“I would love to have a cultural center, much like there are for other groups on campus,” Elfering said. “It’s important to build community.”

In grander visions, Fergus dreams of housing options similar to  greek housing that would support veteran

“A lot of veterans come out of active duty and aren’t prepared for normal life- no place to live, no job lined up,” Fergus said.

Elfering explained that being a service member of the military is not just a job, it’s a lifestyle. Returning to civilian life can prove to be very difficult. Having access to comfortable spaces and special programs on campus is paramount to acclimating to life as a student. Academically, Fergus has identified a need that deserves to be addressed. Out of the students on the main campus, approximately 300 student veterans are on academic suspension. Fergus thinks that getting institutionalized support that connects veterans with disability services in regards to academic support could make a big difference.

There is a designated study space with a few computers adjacent to the resource office, and a comfortable Veterans Lounge in the MU. To improve visibility and community connection, various veteran events happen throughout the year to celebrate and honor the service of veterans. However, this isn’t the only way to connect with veteran inclusion efforts.

“If you’re looking for a way to say thank you, find a way to volunteer,” Elfering said.