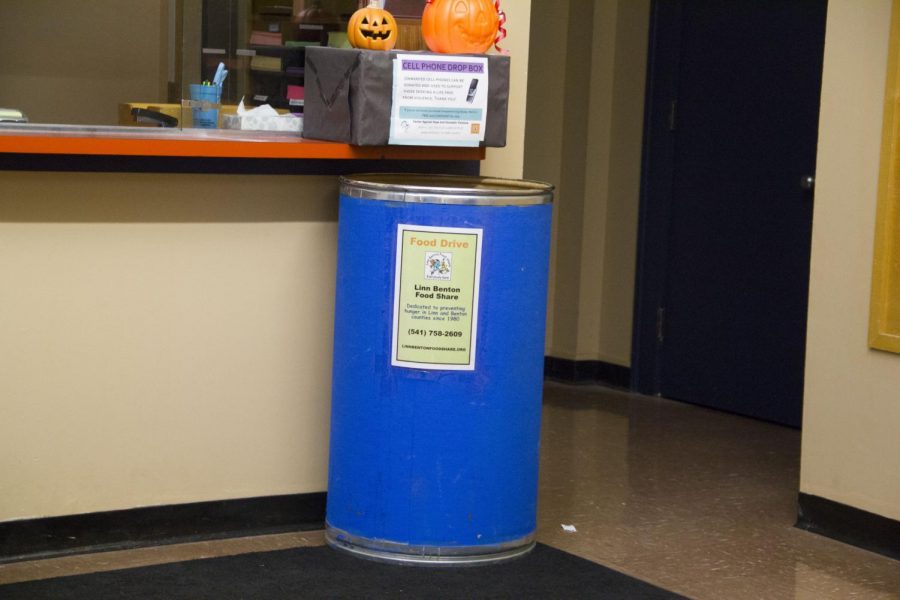 Located outside of Shepherd Hall, the drop box for the OSU Forensics Team food drive is in place until early December. Students can donate non-perishable foods, which will be given to the Linn-Benton Food Share.

The Oregon State University Forensics Team is hosting their sixth annual food drive benefiting the Linn-Benton Food Share. The food will be distributed to the greater Corvallis area and on campus.

“The great thing about the Linn-Benton Food Share is it focuses on the greater Corvallis area, which suffers from food scarcity, especially during the holidays,” said Director of Forensics Marque Porrovecchio.

The community has been very supportive of the drive in the past and the team attributes the success to the fact that all of the food goes right back to the local community. The drive set a new record last year when they eclipsed the one ton mark. The Forensics team is hoping to continue to exceed their previous year as they have done before and get back over one ton.

“I’m hoping we can build off of last year where we collected about one ton of food,” said sophomore physics major Kaden Meyers. “I’m hoping to exceed that by a significant margin.”

The drop box for the food drive is in place until early December in the front lobby of Shepard Hall on OSU’s campus. Shepard Hall is home of the speech communications major and houses the Forensics Team. The “box” is a large blue tube with a sign on the front of it that is underneath the window into the front office of the hall.

“We box it up as soon as it (the drop area) fills up,” said Porrovecchio. “Then they (the Linn-Benton Food Share) comes and picks it up to distribute it.

Porrovecchio said his goal when he took over the team was to “extend the reach beyond education and competition.”

He looked for a volunteer experience for students on the team and decided that a program like the food drive would not only benefit his students, but the community around them as well.

“It’s great to help out the community,” said Nicole Lemieux a junior majoring in political science. “It’s not just for families and children either, it goes to college students who are in need as well.”

The food drive started Nov. 1 and will run until early December. The Linn-Benton Food Share distributes the food to families as well as college students in the area who have trouble getting enough food for the holiday season, and they are looking for general non-perishable foods.

“It (the food drive) has been good for the students, and benefits the community around them as well,” said Porrovecchio.