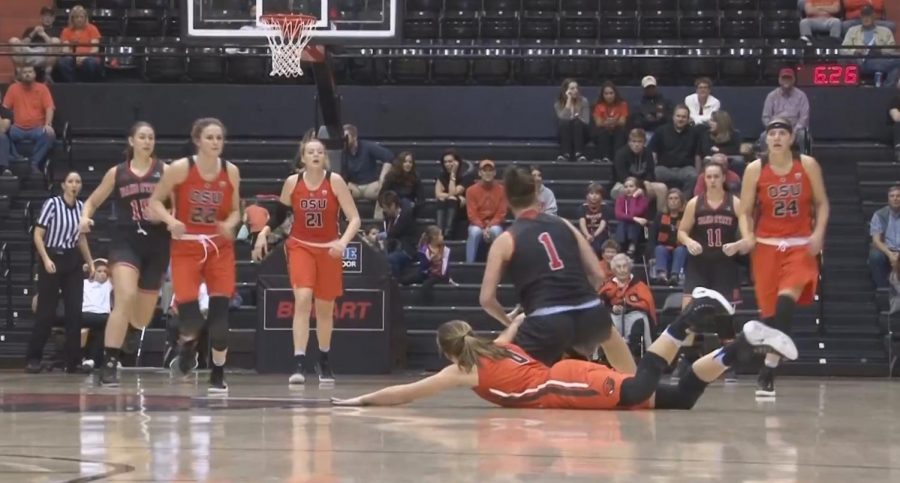 Senior guard Sydney Wiese is always counting down the days until game day.

“We work so hard day in and day out in practice,”said Wiese. “Game day is always a fun day.”

The Oregon State women’s basketball team will play The University of Portland Pilots Friday at Gill Coliseum. The game is the third in a four game homestand that opens up the season for the Beavers (2-0), and ends later in the week against Marquette. The Pilots (0-2) are coming off of back to back losses against UC Davis and University of Nevada Reno.

“Coming off these last few games there’s things we’re still working on,” said sophomore guard Katie McWilliams. “But getting another practice in we are going to be ready to come out and play.”

Offensively the Beavers have had consistent performances from Wiese and junior center Marie Gulich, and have had different players supply the extra scoring in these first two games. In their first game against Lamar McWilliams shot an incredible 7-8 from behind the arc and scored a career high 29 points. And against Idaho State freshman guard Kat Tudor shot 4-5 from three and had a career high 12 points.

“If we need to score someone has to do it,” said Wiese. “It’s not a designated position.”

On the glass Oregon State has been lead by Gulich and standout rebounder from the guard posistion freshman Mikayla Pivec. Even though the Beavers won the rebounding battle against Lamar, they recorded seven less rebound than Idaho State in their second game last week.

“We definitely talked about it (rebounding),” said Gulich. “I don’t think we should ever lose rebounding in a game, we’ve got the height and athleticism.”

Oregon State had great defensive showings last week holding opponents to less than 32 percent shooting from the field in both game. They recorded a total of 18 steals and 18 blocks between the two games last week and Wiese set a career record with six steals against Idaho State.

“We worked on flying around and getting in front of the ball (on defense),” said McWilliams. “ Offensively getting to the basket and hitting open shots.”

With different players contributing big games in the young season the team is eager to see which player has their standout game against the Pilots this week who have been allowing more than 65 points in both of their games so far.

“I think that (everyone scoring) is a continuation of the past couple of years,” said Wiese. “We’ve always had five scorers on the court, that is just a part of Oregon State basketball now.”