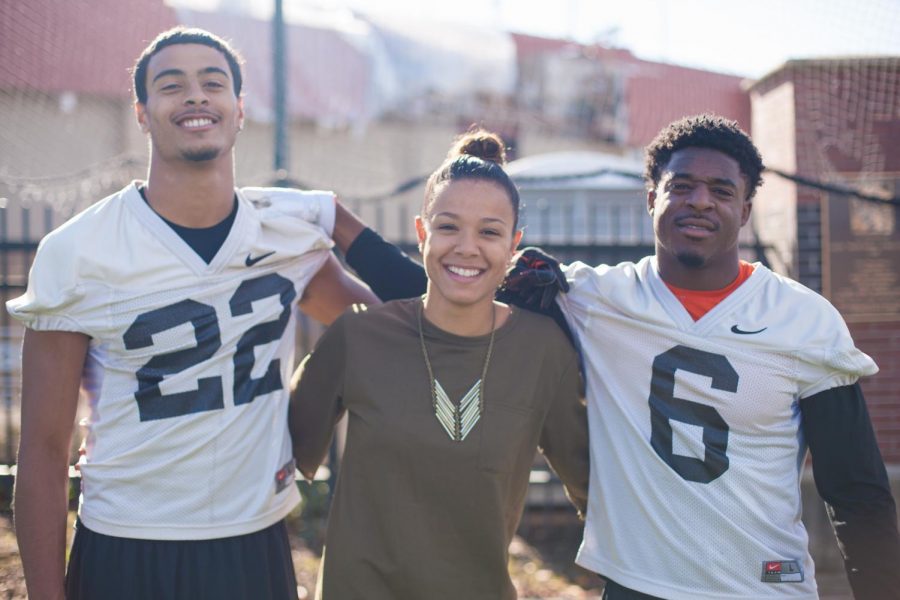 Devin and Seth Collins are siblings; Victor Bolden and Seth are teammates; Victor and Devin are dating—and the trio of OSU athletes couldn’t be closer.

One football player dating a teammate’s sister: that’s a recipe for tension in the locker room.

Not so for Victor, Seth and Devin.

That’s Victor Bolden, the senior wide receiver and team captain, his teammate Seth Collins, the quarterback-turned-wide receiver for Oregon State, and Seth’s sister Devin Collins, the sprinter for the OSU women’s track team who set three school records in one season of competition.

Most importantly for the two wide receivers, there’s no animosity stemming from Bolden and Devin’s relationship. In fact, they’re two of the closest friends on the team.

“Before we started dating, I made sure it was cool with him and if he felt uncomfortable about it,” Bolden said. “We talked it out and made sure everything was good. To this day, we’re still cool.”

It helps that Bolden has been a mentor for Seth on the field; Seth switched to wide receiver this year, where Bolden is a three-year starter. Bolden had a similar mentor in Brandin Cooks in 2013, and now Bolden is taking Seth under his wing just like Cooks did.

“They’re like brothers,” said wide receivers coach Brent Brennan. “Which is good because Seth is learning the position for the first time and Vic has been playing it forever. It’s a good thing when you have your veteran receiver helping a new guy to the position learn how to play, go about his business and what to look at in film.”

“I respect Vic’s athleticism, speed and quickness,” Seth added. “Vic’s one of the best playmakers in the PAC-12. Any time he touches the ball, he could be lights out. A touchdown on any play.”

The duo hit it off when Seth came to OSU in 2015, especially since Seth was preparing to quarterback the team that year and Bolden was a returning starter at wideout.

“I took it upon myself to help get him acclimated to college with him being a freshman,” Bolden said, who became one of Seth’s favorite targets last year with a team-leading 46 catches. “We had to get that chemistry down of quarterback to receiver, so

we got pretty close.”

“I definitely have seen them grow closer,” added senior tight end Ricky Ortiz. “Vic is right there to guide him.”

The relationship extends beyond the playing field, too. Seth and Bolden are intensely competitive with each other, and not just with football. Video games, ping pong, you name it — if a winner can be named, there’s no stopping them from playing.

“I’m like, ‘Well, you guys have at it. I’m going to go home. You guys have fun,’” Devin said with a laugh. “But they’re fun to be around and easy to be around. I don’t have to force anything, which is nice. That would get old.”

The relationship grew between the tandem of wide receivers before Devin and Bolden started dating, but Devin and Bolden’s friendship sparked soon — after a hitch or two.

From acquaintances to dating: Devin and Bolden

When Devin transferred to OSU and Seth arrived as a true freshman in 2015, Devin started hearing Bolden’s name come up even before she got to know him.

“I just kept hearing about this kid named Vic, like ‘He’s so good, he’s so nice,’” Devin said. “I was like ‘Okay, whatever.’ I didn’t think anything of it.”

The Collins siblings lived in the same apartment at the time and Bolden visited Seth often. Bolden and Devin, however, didn’t immediately hit it off. Devin actually says she initially was “not a fan” of Bolden, who first met Devin with teammate Charles Okonkwo. Okonkwo immediately introduced himself to Devin while Bolden, being more quiet and understated, didn’t immediately say hello.

“That just rubbed me the wrong way,” Devin said.

Devin would soon find out, she says, that Bolden is much more personable than she perceived at first. He kept coming over to see Seth and the two would play video games, go over game film or watch other football games. And, as Devin would find out, Bolden became more and more comfortable on the Collins’ couch.

“He was always on my couch sleeping,” Devin said. “That’s what he does, he always sleeps. He naps all the time. I was like, ‘somebody get this boy off my couch. He lives right next to me, tell him to go home. He don’t need to be here.’”

But despite the rocky start, Devin and Bolden went on to become inseparable. She began to get a better feel for his reserved and polite demeanor, and before long Bolden began asking her to hang out — only for her to realize he’d invited the rest of the

“It’d be like him and 40 of the other guys on the team,” Devin said with a laugh.

Bolden, however, didn’t want to push the issue with Devin because she had a boyfriend at the time. He was respectful and patient, but the friendship still developed. So did Seth’s respect for Bolden.

“When I was dating my other boyfriend, Seth was like, ‘Victor’s a good dude. I wouldn’t let you date anybody on the team but Vic,’” Devin said.

“It took a while,” Bolden added. “We were just friends. I don’t know, it just happened. I wouldn’t say a specific time, it just kind’ve developed into something stronger than a friendship and

it built from there.”

Once Bolden found out she was available, he didn’t waste any time to ask her out. Her initial answer, because she wanted to maintain the friendship and hesitated about dating her brother’s teammate, was no.

“I just felt like I had to be persistent,” Bolden added. “It

Bolden and Devin have been able to spend a lot of time together in the past year of dating. They spent Christmas in California and saw both sets of parents, since the Collins family is from San Diego and Bolden’s parents are two hours north in Rancho Cucamonga.

They’ve already talked about marriage and as Devin puts it, they’ve reached another “phase” of their relationship. It developed from acquaintances to friends and then from dating to a serious relationship.

“She’s beautiful inside and out,” Bolden said. “She treats people with so much care. She works hard and has a great work ethic. Those are the things I like about her.”

Devin and Bolden see each other every day, switching week to week on which apartment they go to. Devin prefers her own, but she also likes Bolden’s because she decorated it as a surprise during one of the football team’s road games.

“I messed up by decorating his apartment, now he doesn’t want to leave,” Devin said.

Devin describes Bolden as a “homebody,” and their quality time is often spent recovering from tough workouts.

“Both of us being athletes, we enjoy relaxing,” Bolden said. “We’re always trying to get some down time in and hang out, maybe walk around, enjoy the sun.”

Both Devin and Bolden have good relationships with their significant other’s parents, and Bolden’s parents have traveled from California for every home football game and multiple of Devin’s track meets. Devin often leaves her spot in the student section during football games to go sit with them.

“It’s nice to have his parents there because they like to baby me and feed the crap out of me,” Devin said. “I’ve been extremely sick the last two weeks but I’ve been coming out of it, and his mom has been calling me every day. ‘Are you okay? Are you taking your vitamins?’ She’s mother hen to the max. My mom and his mom are both nurturers.”

Dating is also a big step for Bolden, who never had a girlfriend before Devin. Being single didn’t bother him, he says, but he’s glad with how his first relationship has gone.

“It just never happened,” he said. “I never found the one. As time went on, I found Devin. I’m happy, grateful and blessed that she’s in my life.”

Brennan often gets all of OSU’s wide receivers to come to his house for a casual gathering. Girlfriends are invited, too, so it didn’t take long before Devin was a regular.

“She’s the first girl he’s brought to the house,” Brennan said. “She’s really cool, and Vic’s happy. As long as Vic is happy, that’s all I want.”

Seth and Bolden’s teammate connection has developed into a tight friendship as Bolden and Devin’s relationship has likewise become stronger; Devin and Seth’s sibling connection, meanwhile, hasn’t skipped a beat. As Devin puts it, their humor and competitiveness are so similar they’re almost “the same person.” There is one big difference, though: how easy they interact with acquaintances. Devin acknowledges that Seth is very guarded, doesn’t like doing interviews with the media and takes a while to warm up to people.

“He’s not shy, but he kinda is at the same time,” Devin said. “It doesn’t even make sense. He is kinda shy when it comes to strangers. But once you see his personality, he’s super fun. He’s always messing with somebody.”

Bolden is happy to be the recipient of Seth’s ribbing — it means Seth is comfortable with him, after all. Though Bolden is a senior and Seth a sophomore, Bolden has plenty of respect for his younger counterpart. In fact, he says he would honor Seth’s wish to not date his sister if Seth had said so, but “luckily it didn’t happen that way,” Bolden said.

“His passion for the game is unbeaten,” Bolden said. “He comes out here and works every day. That’s the biggest thing I like.”

The trio has also made a significant impact in their respective sports, partly due to the track and field background they all share. Seth ran the 100-meter dash in 10.8 seconds in high school, Bolden still holds Los Osos High School’s record in the 300-meter hurdle and Devin continues to compete for OSU’s track squad. In addition to her OSU records in the 100-meter hurdles, 400-meter hurdles and 400-meter relay, she’s also in the top-10 in OSU history in three indoor events: 60-meter hurdles as well as the 1,600-meter and 4,000-meter relays. Seth is a multifaceted weapon, accounting for 15 career touchdowns, while Bolden is third in OSU history with 4,948 career all-purpose yards.

Put them all in a 100-meter dash? Bolden feels confident about his chances.

“I think I could pull that one out,” he said.

The Collins siblings obviously will be family forever and Devin and Bolden’s relationship continues to get more and more serious.

“I definitely could see a future happening for us,” Bolden said. “I’m just continuing to build the relationship and keep growing.”

“As far as Seth is concerned, he’s always going to be in the picture,” Devin added. “He’s my brother. I couldn’t get rid of him even if I wanted to.”

Devin, Seth and Bolden each have their individual relationships with one another: teammate, sibling, boyfriend or girlfriend. Their communal identity as a trio is just as important, though. They’ve become some of the most talented OSU athletes on campus, they’ve all been in a Bible study together and they hope to stay geographically close after graduation.

On Thanksgiving, both sets of parents are coming up from California to have a giant feast with everybody there.

They’re a mini-family, and they expect to keep it that way.