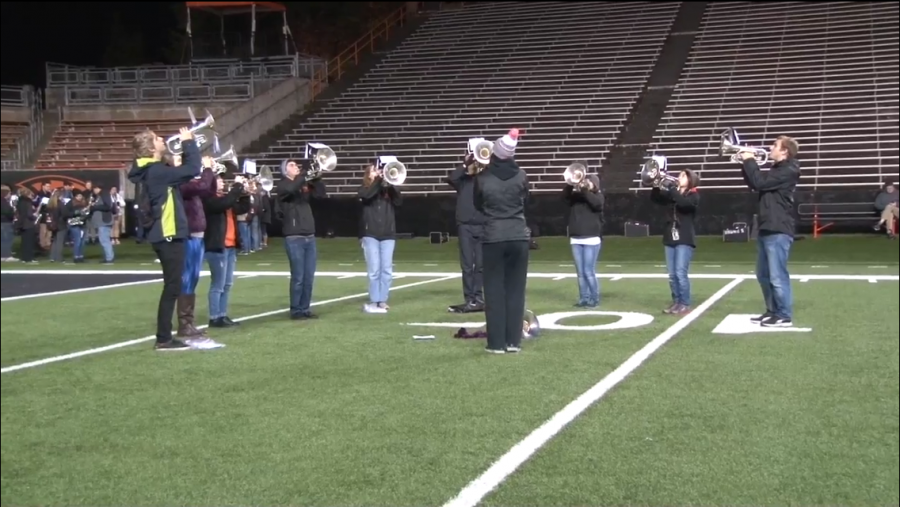 The Spirit and Sound of Oregon State University, otherwise known as the OSU Marching Band of 270 students prepares for Civil War several weeks before the momentous event.

OSUMB was the first band formed on a PAC-12 campus in 1890 and is now one of the largest and most active organizations on campus, according to the band website.

The primary job for OSUMB students is to perform on the field at Reser Stadium pregame and halftime in front of the crowd, however OSUMB also participates in campus activities, parades, and a multitude of other community events.

One of the largest events the band partakes in is the Civil War.  The rivalry football game between Oregon State University and University of Oregon that will take place on Nov. 26 at 1 p.m. in Reser Stadium, however band preparation started week one.

“As soon as band camp started we began thinking of Civil War,” said Kira Cuthbert, a spanish and sociology sophomore at OSU, who participates in Color Guard.

OSUMB meets every Monday, Wednesday, and Friday for practice for over two hours under the lights at Reser Stadium.

“It’s stressful, but also very friendly, encouraging, uplifting and motivational; it’s a good break from studying and a chance to be apart of something bigger than school,” Cuthbert said.

According to Angel Krempa, a public health and political science freshman, each performance has a specific theme and in order to convey the message, the band members are choreographed in a specific march, they play different music and even use different flags.

“The theme for Civil War is ‘Art and Science’,” Krempa said, “The band will be marching in the shape of wheels and the color guard will be using swing flags, which are smaller and used with only one hand.”

The pressure is on for new Band Director Olin Hannum because this will be his first Civil War.  Hannum is also having to deal with having one less practice due to students traveling for Thanksgiving Weekend.

“It is a little rushed because we have one fewer practice during the week,” Hannum said. “But the bands tend to pump themselves up; each section (of the band) has their own pre-game ritual that gets them going.”

According to Krempa, segments of the marching band go out to restaurants and around campus Friday night to get Beaver fans excited for the big game. Be on the lookout in the coming week for your fellow Beavers.

For more information check out the OSU Marching Band website and get tickets to The Civil War football game to watch the Spirit and Sound of OSU in action.