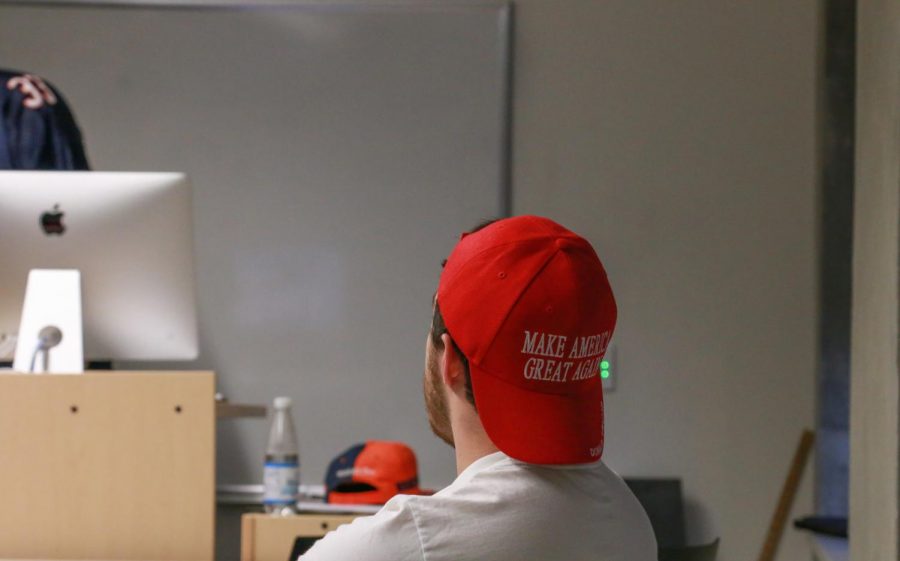 The College Republicans of OSU meet every Tuesday to discuss politics and meet with friends.

Oregon State University’s Republican club doesn’t believe in traditional partisan politics. Instead, members are adamant that the club is about coming together to discuss politics in a friendly manner rather than declaring a personal dogma superior to others.

Club president Tanner Lloyd said for him, the club is more of a way to connect with friends and socialize than anything else. Others were quick to echo his sentiments.

“I joined because I wanted something to do,” Lloyd said.

“It’s more about being social, getting involved,” added Fisher. “Even if my views don’t necessarily align with everyone’s. That’s what college is all about. Meeting new people.”

On a more political note, Lloyd discussed the club’s mission statement. He expressed optimism regarding the campus’ ideological makeup.

“We try to provide a different narrative on campus.” Lloyd said. “I feel like our campus is pretty fair, for the most part.”

The abundance of opinions within the club is clear when the group discusses national or federal issues.

The group lacks a consensus to the extent that they have not endorsed an actual presidential candidate. Members support Donald Trump, Gary Johnson, Hillary Clinton and a variety of other, lesser known candidates.

However, when it comes to local issues, the group is near unanimous in their opinions. In particular, the group is dead set against measure 97, which would raise Oregon’s corporate tax, which is currently the lowest in the nation.

“LRO, from the Oregon state government, did their investigation on measure 97 and determined that it would cost an extra $600 a year for every Oregonian.” said Club Secretary Chase Whitten. “The tax on the corporations would just get passed on to the consumers. We really don’t think that that’s acceptable.”

In addition, the club backs Dennis Richardson’s bid for Secretary of State, and had a mixer with Governor hopeful Bud Pierce, and prospective Treasurer Jeff Gudman.

In the end, Lloyd stresses that it’s about the people, not just the politics with the club.

“We like to get together, even if we’re not talking about towing the Republican line all the time.” said Lloyd.

“We definitely get along really well,” added Whitten. “I think half the reason we come is just because we like talking about politics, even if we don’t agree 100 percent of the time.”

College Republicans at OSU will be hosting a watch party for the election. If you are interested in joining them, you can find them in Stag 113 on Tuesday Nov. 8, at 6 p.m.