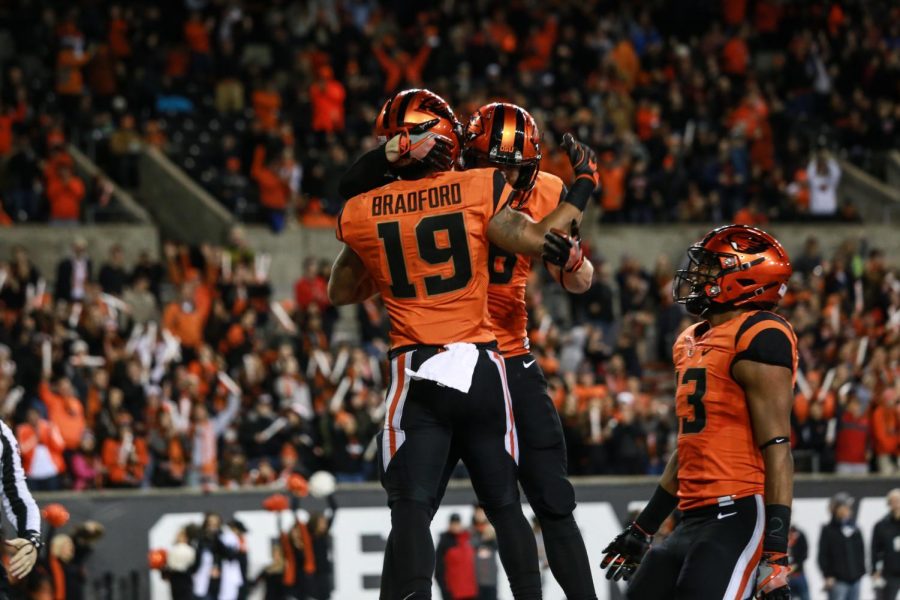 Twenty two games into the Gary Andersen tenure, his teams struggled to put together a complete 60-minute games, as his team struggled for nearly two seasons with a 4-18 record.

In game No. 23, Oregon State finally delivered in a resounding 42-17 victory over the University of Arizona Saturday night in Reser Stadium.

“[On] Defense there’s a few plays we’d like to get back but I think we ran well and we contained the crazy big plays in the run with the quarterback’s feet which was good to see,” Andersen said. “Special teams we did what we needed to do for the most part so it was solid.””

From start to finish OSU was able to run and throw the ball when they wanted to. Sophomore quarterback Marcus McMaryion threw for five touchdowns, while sophomore running back Ryan Nall and freshman running back Artavis Pierce ran for a combined 195 yards.

“I think Marcus was masterful at taking the clock down and doing the things he needed to do,” Andersen said. “He threw the ball ya know ya know? guys made plays for him when you can throw it and catch it and run it offense becomes a lot simpler and a lot cleaner.”

McMaryion had more touchdown passes than incompletions (five to three). And he did so without the team’s two top receivers, Seth Collins—who has been in the hospital with an illness —and Victor Bolden, who left with an injury in the third quarter.

Instead, receivers such as junior Jordan Villamin, freshman Trevon Bradford and sophomore Timmy Hernandez each scored a touchdown. Villamin’s was from 53 yards out, Bradford Hernandez’s for 27 yards and Bradford’s was from 35 yards.

For Villamin, it was his breakout game after struggling to replicate the success he had in his first two season in Corvallis. With extra motivation coming from Collins, Villamin finished with six catches for 124 yards and a touchdown.

“You know I just wasn’t playing good. I had really good teammates keeping me uplifted,” Villamin said. “When my time came this week they just kept telling me I could do it so I believed in them. I had a lot of motivation from Seth so I just kept him in my prayers and thoughts. That’s just how I did it.”

“Being off the field for so long, coming in we’ve got a chance to refresh our minds, and go out there and play 3 downs, 4 downs, however long it takes,” said junior linebacker Manase Hungalu.

As good as McMaryion was, it was the defense who strung together three consecutive series to stop Arizona once they got into striking distance. The return of sophomore cornerback Dwayne Williams and junior outside linebacker Titus Failauga provided an extra lift to the OSU defense.

With Oregon State leading 21-7 late in the first half, Arizona mounted a drive deep into OSU territory with a chance to cut the Beaver lead to seven before halftime, the Wildcats would also receive the second-half kickoff. The Beaver defense was able to bow up and hold Arizona to a field goal.

Then to start the second half, the OSU defense forced two Arizona three-and-outs. Capitalizing on the the defense of stops, the OSU offense proceeded to score touchdowns on a 35-yard strike to freshman wide receiver Trevon Bradford—the first of his career—and a three-yard rush by Nall to push the lead to 35-10 midway through the third quarter.

“It was very big for the defense,” Hungalu said. “All we plan on doing every play is getting the 3 and out, and coming out with that kind of momentum, it helped the offense a lot, it helped the whole team.”

The defense also didn’t flinch once Arizona decided to make a quarterback switch, inserting a more athletic Brandon Dawkins for Anu Solomon, who started the game.

“We had to pay attention to that more, we knew that when (Dawkins) is on the field, there is going to be more QB draws, so we needed to fill the box on defense a little more,” Hungalu said. “Play pass first, QB run second. He got a few long ones, as long as we stopped them in the pass, QB run was all they had.”

After not winning a single Pac-12 game a season ago, the Beavers now have two and  will get a chance for a third next week in the Civil War when OSU hosts the University of Oregon. The Ducks are  coming off of an upset of No. 12 Utah in Salt Lake City.

After the way the Beavers played tonight, the team is confident in their chances to end the eight-game losing streak to their in-state rivals.

“We’re glad to get the win,” Williams said.  “Next week is a big game, everyone in Oregon is probably going to be there, so we’re looking to get that win too.”