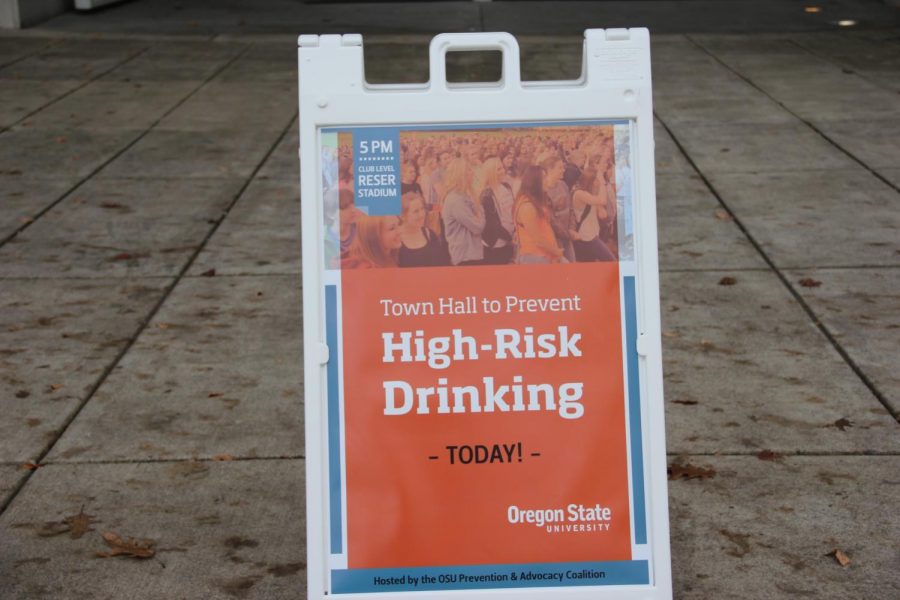 More than 70 people gathered in the club level room in Reser Stadium Wednesday night to talk about the issues of high risk drinking in college campuses. Just a week after the celebrations of Halloween and Homecoming weekend, this town hall meeting was focused on the problems that Oregon State University has been working on throughout the years.

One of the main speakers of the meeting was Fran Harding, director of the Center for Substance Abuse Prevention. She traveled from Washington D.C. with information about what to do about alcohol prevention and high-risk drinking on college campuses. During her visits between college campuses and the communities surrounding them, she’s noticed many similarities on how they inform their students on the consequences of heavy drinking.

“I hear very similar things across the country of what they are doing, even I made trips to the Pacific Jurisdiction Islands, like Saipan and Guam,” Harding said. “They are all doing similar information and stuff, just a little twist.”

Harding believes the best way to make a safe community around campus is to keep the students as involved as possible.

“Students make up 50 percent of the community ( at OSU). You need to see what they have to say and build that respect ,” Harding said.

During the event, there was a student-led panel, with students taking questions and comments from the audience. Throughout the discussion,.several student shared their insights.

One student brought up workshops his fraternity does before parties to keep people safe, while another one talked about a possible system for resident halls to keep track of who is coming through their doors outside of their actual residents.

John Ruyak, alcohol, drug and recovery specialist and one of the people who helped plan the town hall meeting, was pleasantly surprised about the observations from the students.

The data he’s talking to was built by Rob Reff, director of Prevention, Advocacy and Wellness Student Services at OSU. Reff brought up data from AlcoholEdu, a program for new, first-year students to take before coming to school. It’s usually partnered with Haven, the program for sexual assault on college campuses.

Through AlcoholEdu, students are educated on how to handle someone who has alcohol poisoning, they learn how much is in an alcohol beverage, and ways to be safe while drinking.

“I think one of the exciting things happening lately is students want to learn more about the role of alcohol (on campus) and having them be active and engaged in learning,” Reff said.

Almost 10,000 first-year students enrolled in AlcoholEdu as of fall 2016. Out of that large group, 90 percent felt more aware of high-risk and underage drinking effects and 86 percent felt like the program prepared them to make responsible decisions about alcohol.

It’s with programs like AlcoholEdu and this town hall meeting, Ruyak believes that we are getting better with educating not only the students on campus, but the surrounding community members who are worried.

“Informed students will make educated decisions,” Ruyak said. “Having the student leadership involved in events like this, with administrators, will bring awareness that will lead to action.”