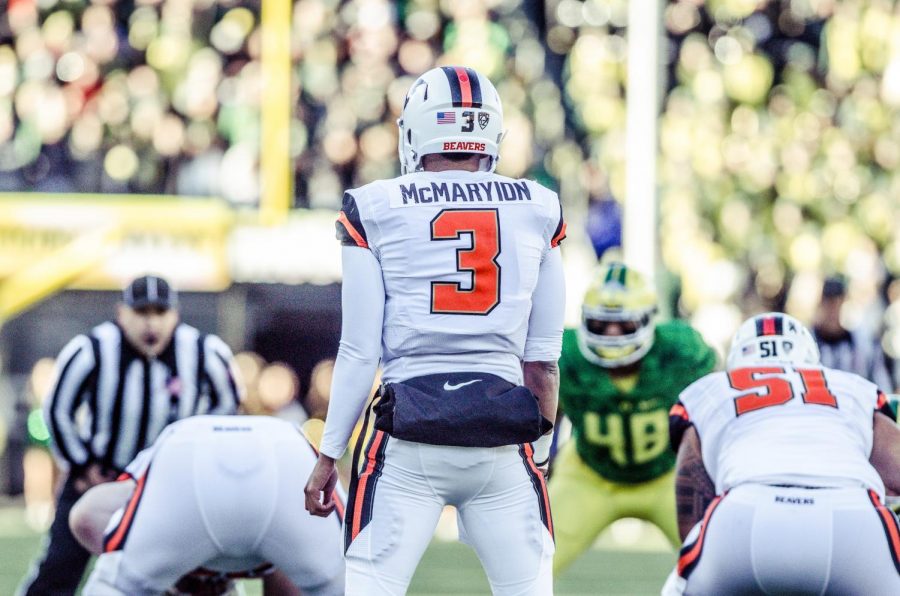 Saturday’s Civil War will mark the 120th meeting between the Ducks and Beavers, the longest-running college football rivalry west of the rocky mountains.

Both teams are coming off of wins headed into the Civil War for the first time since 2009.

The Beavers (3-8, 2-6 Pac-12) are entering the Civil War following their best offensive performance of the season. Starting quarterback Marcus McMaryion finished 16-19 for 265 yards and put up a career-best five passing touchdowns.

“I think the game experience continues to build with him (McMaryion),” said co-offensive coordinator Kevin McGiven. “You see him carrying things over from one game to the next and I see him getting better each week.”

The Ducks (4-7, 2-6 Pac-12) on the other hand are also coming off a dramatic win in the last seconds against the Utah Utes in Salt Lake City, 30-28. Despite low expectations and a hostile crowd, the Ducks were able to pull off an upset against the 12th ranked team in the country.

Led by true freshman quarterback Justin Herbert, the Ducks have found an offensive spark over the course of the last five games. Herbert did not acquire his first start for the Ducks until week six of the regular season.

Since his start, Herbert has thrown for an outstanding 18 TDs to only four interceptions. His quarterback rating of 151.9 puts him in the top four quarterbacks in the Pac-12.

It has been eight years since the Beavers achieved a civil war victory, dating back to 2007. Current offensive quality control assistant Lyle Moevao was the starting quarterback and the Beavers were able to win in double overtime, 38-31.

The team went on to finish the season 9-4, third in the then Pac-10 conference and finished by winning the Emerald Bowl 21-14 against Maryland.

For the first time since 1991, both the Beavers and Ducks will finish with losing records despite the outcome of the 2016 Civil War.

Although the players and team records may now be different, the one common theme that hasn’t changed is the importance of the rivalry itself.

“I think the kids understand the rivalry,” said McGiven. “It is an exciting game and I don’t think you can understate that.”

For offensive starters: Sean Harlow, Gavin Andrews, Dustin Stanton and Victor Bolden, this year’s Civil War will mark the last time that they play in a Beaver uniform.

“It would seal my career at Oregon State to win,” said senior wide receiver Victor Bolden. “It’s been a fun four years and it would be really sweet if we go out with a victory.”

Achieving a team win for this year’s senior class is what McMaryion is trying to do.

“It’s an extra motivational factor to send these guys out on the right note like they deserve to be sent out,” said McMaryion. “We wish we could have sent them out with a couple more wins, but we’re going to do everything in our power to send them out on a winning streak.”

Neither team will advance to a bowl game depending on the game’s outcome, nor is either team ranked in the top 25, yet fans still recognize the significance of this game. For the first time since it was done in 2014, Reser Stadium will host a sold-out crowd.

Despite the underwhelming team records this season, both the Beavers and Ducks understand the importance of winning the Civil War, for whoever wins the game, can claim bragging rights for 364 days.