Locking your phone during your class just became beneficial 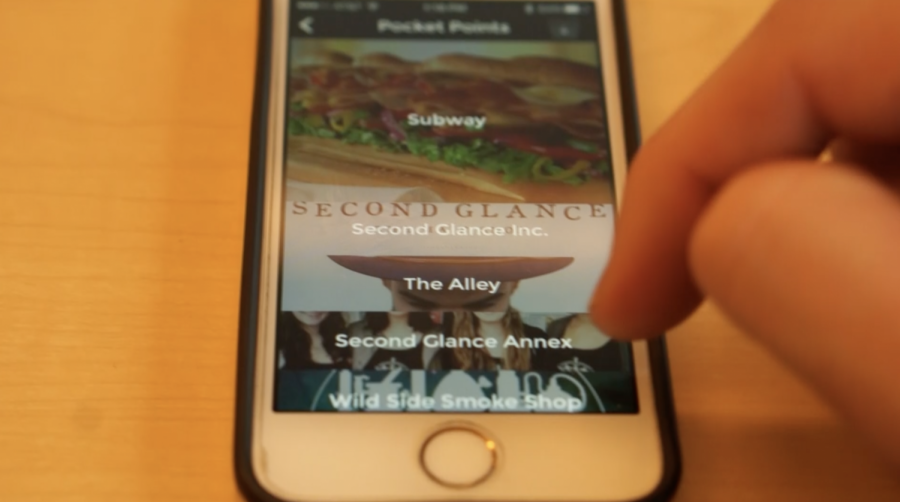 The use of cellphones in class can be very distracting. Getting sucked into your phone doesn’t take much effort, all it takes is one notification or a quick check of the time and you are already halfway through yesterday’s Facebook feed.

But a solution may be here to save student’s attention and professor’s sanity. Pocket Points is an mobile app developed by Chico State graduates. The app’s purpose is to give incentives for students to pay attention in class. To earn points, the phone must be locked while on campus. Points are accumulated at about two per hour.

Once a user has gathered enough points, they can spend them at shops here locally or at online stores. In Corvallis there are 14 businesses who offer Pocket Points rewards. Online offers range from clothing brands like JackThreads to sporting events like the Portland Trail Blazers games.

Dutch Bros fans have a reason to rejoice because of Pocket Points. Three offers are available through the app, all of which help reduce the strain on your pocket book. According to Chase Celorie, an Oregon State Student and barista at Dutch Bros, the most popular Pocket Points purchase at the coffee shop is the Rebel. Considering that the app is used mostly by college students, the popularity of the energy drink shouldn’t be surprising.

“People are always trying to save money, and if they already like Dutch Bros they might as well [get the app],” said Celorie. “ After that, it’s just an excuse to go get a drink, because it’s cheap.”

Wild Side Smoke Shop partnered with Pocket Points and has two offers available. Since partnering, the shop has seen an uptick of customers and many use Pocket Points.

“A Lot of students are coming in with the app, which is pretty cool because you can tell they are paying attention in class. Because they have to have their phone locked in order to get the points,” said Lucas Forbes, who is an employee at Wild Side Smoke Shop.

Whether or not the app is effective in improving the classroom environment is up in the air, because more than just phones can contribute to distraction.

These types of classroom distractions are a relatively new issue for professors. When New Media Communications professor Dan Faltesek was in his undergrad, these issues didn’t exist.

“I’ve noticed over the years, it’s changed. It’s come and gone a little bit, when phones first started becoming ubiquitous people tried to be on their phones constantly. As you may have gathered, undergraduates often overestimate their ability to multitask, though that is also true of people who are in the workforce as well.”

For Faltesek as a teacher, phones distracting him isn’t the issue but students distracting themselves and others around them is.

“I think students are cheating themselves out of education sometimes by having the phones out and having the laptops out and watching Netflix when they should be in class,” said Faltesek.

A simple balance test can be issued to see whether or not the app will stick around.

“Is the reward of having the phone locked greater than the social and psychic reward you get from being on the phone,” Faltesek said. “If being on the phone gets you access to Facebook and all the things you want and helps you get ambient relational contact or ambient awareness of your friends, you’re going to stay on the phone, because it’s great. What ever little thing they’re going to give you, it’s not going to be enough,” he adds.

For now, it seems that the app at least couldn’t hurt a student’s productivity. Savvy coupon cutters and discount chasers should see if the app will help their in-class productivity, as well as save a couple of bucks.