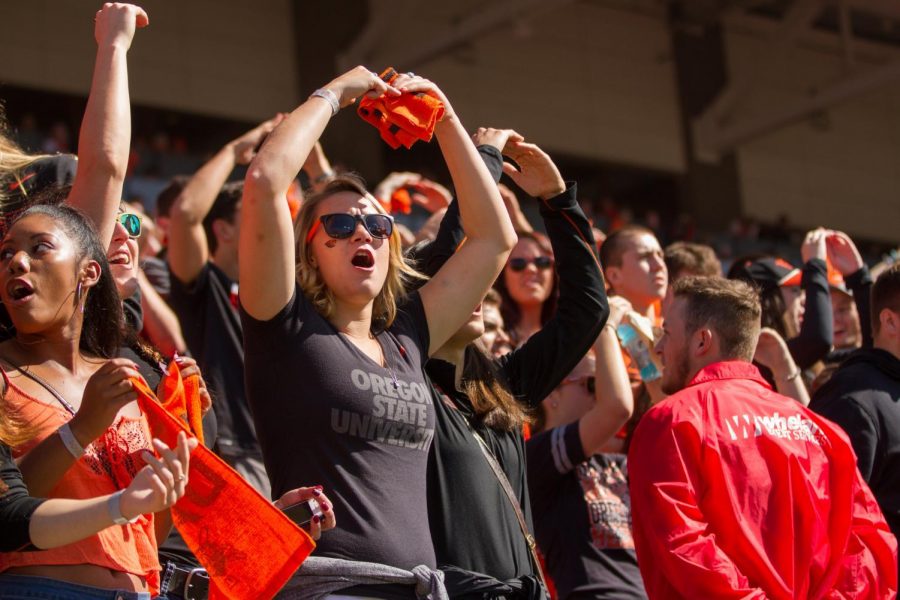 We are college students, so this is a college league. Oregon State is in the Pac-12 conference, only players in the “Conference of Champions” are eligable. Corvallis is our home, so three Oregon State players must be in your lineup at all time.

This is a four-team league, but trust us, this one of the most competitive leagues around. Roster are pretty standard, consisting of one quarterback, two running backs, two wide receivers, two flex (RB/WR), one tight end and one kicker.

The Duckless Dandies vs. The Bombastic Beaver Boys

Well as projected the Bombastic Beaver Boys (BBB) had a huge turnaround from the weak performance last week. Even the though Beavers themselves were blown out this weekend, it made no difference to my dominance in the Pac-12. After a pathetic outing of 46.9 points points last week, I now am the first player in the league to break the one-hundred point barrier this season.

Luke Falk and the Pirate were in unison once again as they embarrassed the Ducks. As well as JuJu Smith-Schuster proving he is ready for the next level after USC’s season comeback win against the previously undefeated Sundevils. After a lot of thought as to whether or not I should keep Gaskin, he blows up against Stanford, proving that the Huskies are for REAL, and Dawkins is not. Sorry not sorry Josh. Too soon?

The only thing sweeter than scoring one-hundred points this week, would have been more productivity from my Beaver players. If there is a silver lining with the Beavers, it is the fact that Artavis-Pierce could quickly become the Beaver’s feature back in the coming weeks.

Looking ahead to week three, look for the BBB to level the competition once more. While the Beavers themselves may struggle, there is nothing but clear skies for this fantasy team.

Nothing really went right for the Duckless Dandies this week.

Kinda like the Oregon State football game. But hey, things can turn around for both teams.

My switch from Josh Rosen to Brandon Dawkins didn’t work out. That’s all right, I can always switch back if needed. Christian McCaffrey had a mediocre game. That’s alright, he’ll be ripping off 150-yard days again in no time.

Brenden, I’m looking forward to potentially tweaking your 2-0 mark to a slightly less pristine record. Let’s see what we can do about that this weekend, shall we?

The Boneyard Boyz vs. Sethy Seth and the Funky Bunch

Well, this is just starting to be a cakewalk. After winning the natty last season, the new look BoneYard Boyz are off to an incredible 2-0 start with two big blowouts. Brian couldn’t even sniff victory thanks to Rolls Royce Freeman and big play Davis Webb. Webb and Freeman accounted for 53 of my 73 points. With Webb taking on a very questionable OSU defense this week, things are only going to get better for me. With Josh Worden on the horizon next week, it’s safe to say that the Boneyard Boys are safely going to be 3-0.

Many are jumping off the Darell Garretson and Jordan Villamin bandwagon, but I haven’t.

But nevertheless, it’s soul searching time for Sethy Seth and the Funky Bunch. Two straight losses, and consecutive weeks on scoring less than 42 points is not where I anticipated being after two weeks of competition. With a quarterback that hasn’t played more than a half of football the last two weeks (Garretson), paired with a running back who is working back from injury (Wilson) to go along with a wide receiver that isn’t performing the way he once did (Villamin), it’s an uphill climb for the Funky Bunch. On the bright side, Garretson can’t get much worse, Wilson is set to return this week, and Jordan Villamin will soon return to doing Jordan-Villamin things….I hope.