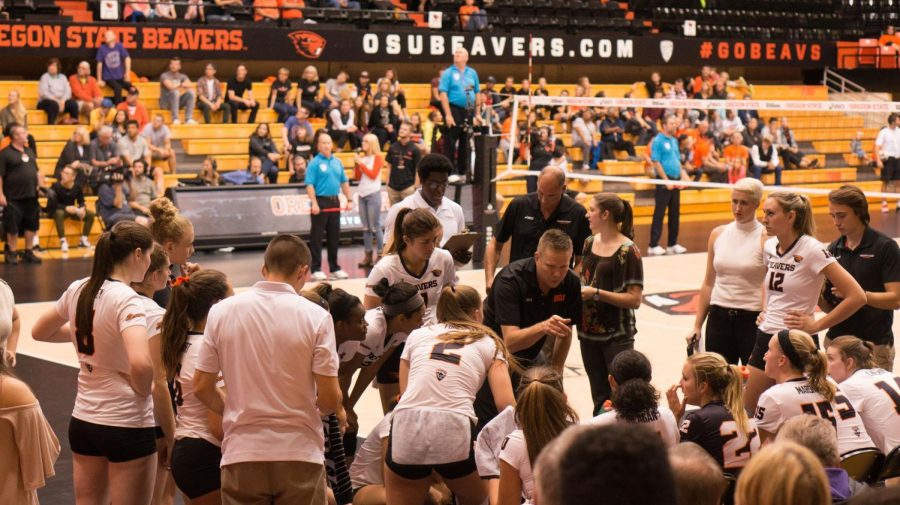 Oregon State volleyball hung tough with eighth-ranked Washington on Sunday afternoon, but fell in four sets to the Huskies.

“This is a tough league, and you’ve got to be able to be resilient, you know. You make a few mistakes and get over them,” said head coach Mark Barnard.

“As you saw at the end of the sets that we lost, we made all the errors,” said Barnard. “Part of it is experience. We’ve got a young-ish team with some of the key positions. You have to kind of live them learning to do that,” he added.

Sophomore outside-hitter, Lanesha Reagan led the team in kills with 17.

The Beavers bounced back from the first set loss with a dominant second set performance, where they led start to finish.

In a set that hosted 12 ties and five lead changes, the third set was even more competitive than the first. But, Washington’s hitting percentage in the third narrowly edged the Beavers’ .304 to .200.

“Their hitters got a good swing at the ball nearly all the time, so you saw towards the end of the match a lot of balls that were high, but off the net, they still chased them hard and hit them,” said Barnard. “Where as we were tending to give them an easy ball back. They put a lot of pressure on us because they hit the ball when it’s not an ideal situation.We don’t do that, that’s something that we can learn from.”

Though the first three sets were hard-fought, the night ended quickly due to a 12-25 unraveling in the fourth set.

“We expend so much energy that we just haven’t quite figured it out yet how we can keep competing at the end of a match,” Barnard said.“We’re too tentative in situations where we don’t have a great set or during a broken play. We’ve got feet, we better get our feet to the ball,” he added.

Though the night ended in defeat, coach Barnard is excited for his players, but wants the team to improve even further.

“I’m happy with all of them, how they’ve developed, but I’m unhappy we still haven’t developed as a team far enough yet,” Barnard said.