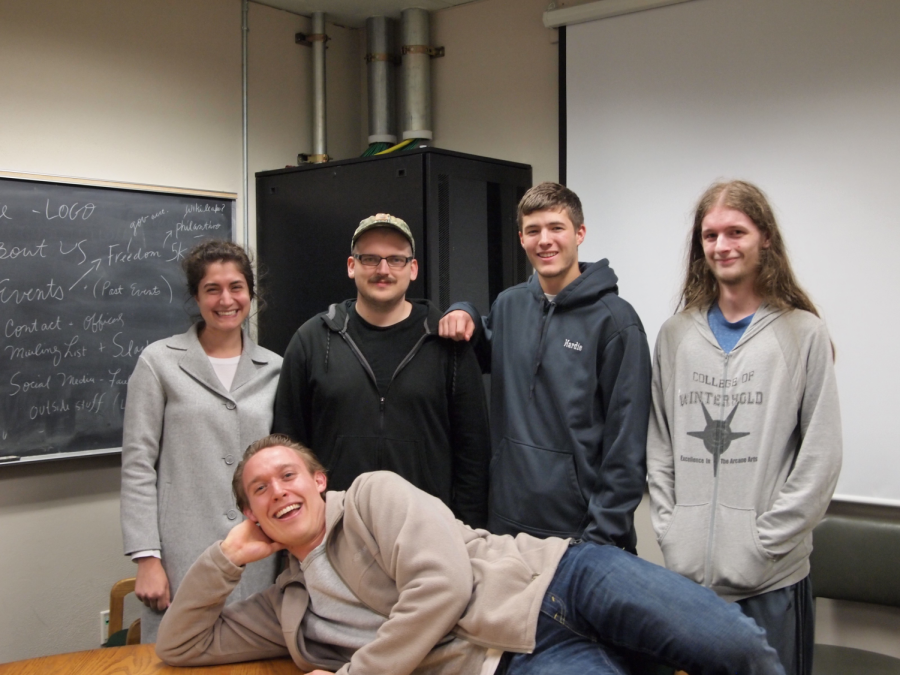 Although not an officially recognized club, the Oregon State University Libertarians are gaining traction, each member affiliating with the basic principles of libertarianism.

An emerging club at Oregon State University looks to give students a third option for political affiliation. The OSU Libertarian group places emphasis of principles of liberty, autonomy and freedom of choice.

Although not officially recognized by the university as a club yet, the group has a handful of members and is about to be officially sanctioned by OSU. The group does not have a platform or set group of principles and is not affiliated officially with the Libertarian party of the United States, unlike the College Democrats and Republicans. Instead the members of the group hold differing beliefs but all affiliate with the basic principles of libertarianism.

“We have a big spectrum [of libertarians] from the Ayn Rand, Murray Rothbard libertarians to the more moderate Gary Johnson, Ron Paul libertarians and everything in between,” said Amanda Vondras, a member of the Libertarian group at OSU.

According to a recent Gallup poll, a record 43 percent of Americans now identify as independent politically, this number has been steadily increasing since 2008. The Oregon State Libertarian group looks to offer the opportunity to students to connect with those that hold similar principles regardless of party affiliation.

“We want to get more awareness out on libertarians and what they stand for by getting more member involvement … spreading the message more to help the movement grow,” explained Taylor Hardie, another member of the OSU Libertarians.

Just what sort of message do the libertarians have? Libertarian group member Kevin Fisher expressed it by saying “we take a left on your sex and we take a right on your money,” referencing the liberal views of same sex marriage and the conservative view of wealth.

Most of time Libertarians are neither liberal nor conservative but borrow principles from either side of the political spectrum. Libertarians advocate personal and economic liberty as well as social tolerance. Many people reference the definition by Libertarian Matt Kibbe who defined it as: “Don’t hurt people and don’t take their stuff, that’s it, in a nutshell.”

Pew research has called the current election the most polarized election in United States history, in the wake of this polarization many have decided to vote for Libertarian presidential candidate Gary Johnson. Despite appearing on the ballot in all 50 states, Johnson was not invited to the presidential debates, and he is currently polling at six and a half percent of the popular vote nationally according to Real Clear Politics averages.

Although not everyone in the group supports Gary Johnson’s presidential campaign, they agree with his basic principles of being a libertarian and support Our American Initiative, a group that looks to open the presidential debates to third party candidates. Members of the group believe that both political parties work extremely hard to exclude them from the election and believe that they are under represented in politics. The group looks to increase libertarian involvement locally and nationally to have their views better represented.

On a statewide level there are several libertarian candidates looking for a public office position, including James Foster, who is running for governor and Andrew Freborg, who is running for state representative for District 16 where Corvallis is located.

When asked about what the largest issues in the United states the group had a wide variety of responses.  The group’s main issues currently in the United States are ending the War on Drugs, national debt, protection of civil liberties, reduction of welfare and an end to the United States involvement in international conflicts.

When asked about the largest issues currently at OSU there was also a wide variety of response. Issues included carrying firearms, affordability of school and elimination of free speech zones. One issue that seemed to matter the most however was the upcoming addition of mandatory social justice learning modules and a bias response team at the university.

The OSU Libertarians are looking to expand their group through new membership. Those interested in joining are encouraged to visit the group’s Facebook page to contact them about upcoming events and meetings.