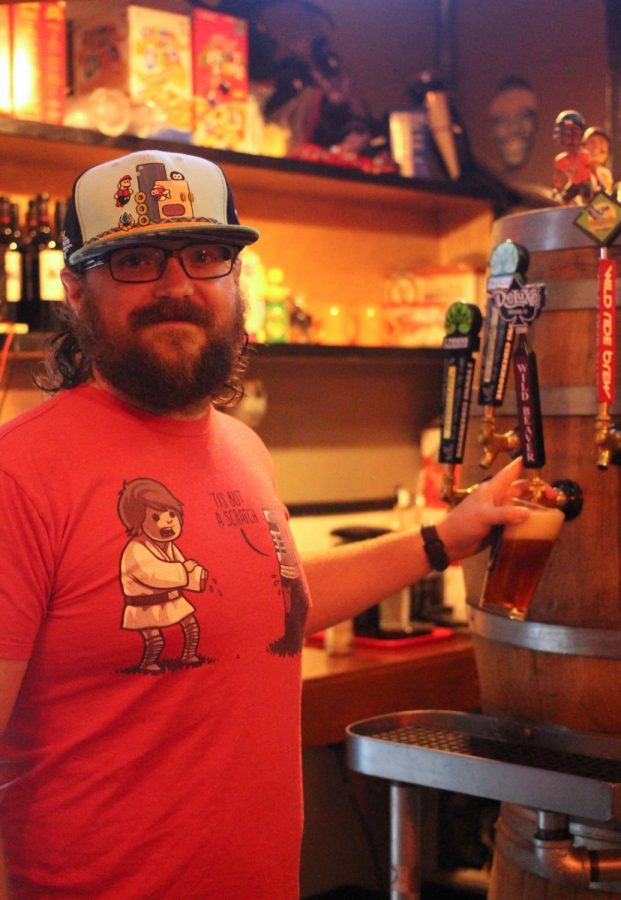 The Dam bartender Russel Barlow pours a Wild Beaver, just one of the over 20 local beers the new bar arcade has on tap.

In the making since 2013, The Dam offers food, alcohol, arcade and other gaming opportunities to the community, can hold over 400 patrons

Beaver Nation just got a new place to drink and play. The bar arcade is a popular new trend in Oregon, and now Corvallis has its own-and more-in The Dam.

Walking into The Dam, one is greeted by the sounds of pinball machines jangling upstairs. The first sight is the bar, where patrons lounge about and enjoy a drink, while sports news hums from the multitude of TV’s. Upon inspection, are sports cards sealed into the countertops, and murals of sports stars on the walls such as Jacquizz Rodgers and Stephen Jackson. Beyond the bar is a basketball half court, with corn hole boards decorated with characters including Bill Murray and the Great Cornholio. The ceiling is plastered with posters. A feeling of adolescence is invoked.

Owner Ben Metzger has been busy fixing up the old Sivetz Coffee Building, across from the downtown Safeway, since 2013. In 2014, his Indiegogo campaign video detailed his vision of a Sports Bar/Bar Arcade hybrid. His campaign garnered $3,175 in contributions from 39 backers, who were rewarded with $20 in arcade tokens, Dam t-shirts, Dam club memberships, and custom murals on the Dam walls for their donations.

What has developed is a full service restaurant and bar with 20 local brews, oversized appetizers, a half court for corn hole tournaments, TV’s featuring sporting events, and old school arcade games and pinball machines upstairs. He even has a couple machines with custom-made wooden barrel cabinets.

“It’s a sight to behold. It’s something beavers gotta see,” Metzger said. “We’re just entrenched in here, and we’re here for the students. We got what you need, we got what you’re looking for.”

Russell Barlow has been a Corvallis bartender for over six years, and is excited to be at The Dam.

“It’s really open, so we can interact with the customers,” Barlow said. “You come in, there’s stairs to the left, there’s the bar to the right, and then in the middle’s a half court, like a basketball court. So it’s a cool, open vibe, and you can just greet everybody.”

Barlow was aware of The Dam’s construction over the past few years, and when the opportunity for employment arose, he applied.

“I was excited, because I like other bar arcades across the state. And then the fire code limit is in the high 400’s, so you can fit a couple hundred people comfortably on the dance floor. They’re gonna have some live shows in the future, and people are getting excited about that.”

Reviews on Facebook and Yelp have been largely positive, with some complaints. Among them is a lack of seating.

“We’re getting more stools, because there’s only a couple dozen stools in the place,” Barlow said. “He [Metzger] opened as quickly as he could once the inspections came in. Not everything came in on time, and that was one of the things.”

Jessie Sullivan, another bartender, said that there will also be ten to fifteen more arcade games coming soon. Raised in Corvallis, she wishes there was something like this around when she was growing up.

“Born and raised Corvallis kid. If this was here when I was in High School, I’d have been here,” Sullivan said.

Both bartenders have been impressed with Metzger’s enthusiasm. He makes frequent visits, working on the building and the games, asking his employees questions, taking their advice, and ensuring cohesion. Metzger also did most of the bar’s decorations himself.

“Ben’s a jack of all trades,” Sullivan said.

“I think it’s pretty neat. I think it’s a good start,” Dye said. “I think if they get more support, it could be a lot better. I like the sports theme, too.”

Barlow believes The Dam will only get better.

“Once we’ve got everything dialed in, the positives we got now are gonna be even moreso,” Barlow said.

In the meantime, Metzger continues work, both on the building, and on the games. He is currently working on a game similar to ‘whack-a-mole’ that he called ‘Fire in the Keep.’

“I’m working on one called ‘Putzky,’ a cross between mini golf and ski ball,” Metzger said. “We’re gonna fill up every nook and cranny with games.”