The Daily Barometer, serving OSU since 1896 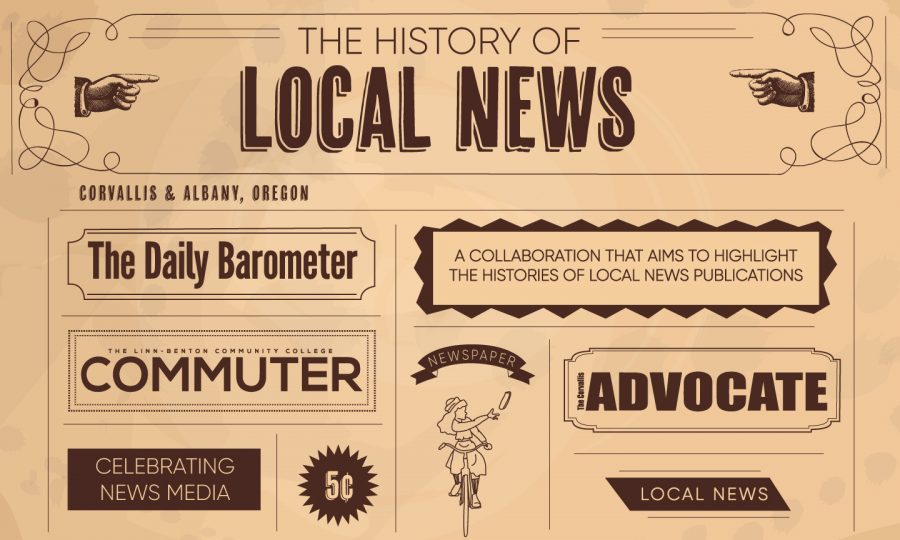 This is a collaboration with the Corvallis Advocate and Linn Benton Community College's The Commuter that highlights the histories of local news outlets.

The College Barometer’s name was chosen as a nod to intense college spirit, the importance of student opinions and pressure of faculty legislation at Oregon Agricultural College in the 19th century.

Started on March 16, 1896, The College Barometer was initially published by three literary societies on campus: The Amicitians, Jeffersonians and Pierians. Interestingly, The Barometer was not always a newspaper—when it first began, it served as more of a literary journal.

The paper was preceded by another publication, the Hayseed, which was issued in the fall of 1894. Austen T. Buxton, the editor of the Hayseed, said it was the first student periodical published in Oregon.

Charles McIntosh, an OSU journalism professor, wrote a manuscript, “The Story of the Oregon State College Barometer” in 1947 about the first few decades of the student newspaper. He said that the Barometer “high-hatted” the Hayseed, though in many ways it followed in its predecessors’ footsteps, taking the same form and arrangement and having similar content to the Hayseed.

The early years were marked by hard work and growth. Writing, editing, artwork and printing were all executed by faculty and students, and they even took the time to engrave illustrations on zinc, copper and wood.

In the fall of 1906, the first issue of the weekly Barometer was issued. Students continued to report on a multitude of topics as their staff grew, having space in the paper for local news, athletic news, literary pieces, alumni stories and more.

As it gained more traction in the university community, The Barometer became semi-weekly in 1909 and went daily in 1922, publishing five times per week and officially becoming The Daily Barometer. In 1940, it printed in color for the first time, and in 1944, it had its first woman editor, Pat Glenn.

When the U.S. became involved in World War II, The Barometer was there to report on it. Before U.S. involvement, McIntosh wrote that on Feb. 26, 1941, “Ominous war outlook is beginning its drain on young college manhood.” In January of 1942, The Barometer reported that more war meant fewer Barometers, but the publication continued covering the conflict and politics surrounding it.

The Barometer also reported on the tumultuous decade that was the 1960s—writing on more serious subjects such as the Korean War, the Vietnam War and the Civil Rights Movement, while also covering more light-hearted topics like the Grateful Dead coming to Eugene, Ore. for a concert in 1968.

In the ‘70s and ‘80s, it covered topics surrounding the Cold War, and in the ‘90s, national events like the impeachment of Bill Clinton. The Summer Barometer was also added in 1970.

In 1996, The Barometer website was introduced, in honor of the 100th year anniversary of the publication. Shortly after, it reported on the 9/11 terrorist attacks. An editorial from Sept. 19, 2001, read, “Last Tuesday, America had a heart attack.”

In 2008, when the Great Recession hit, The Barometer, after years of surviving on ad revenue, had to begin using student fees to continue its work. The same year, they covered the election of the nation’s first Black president to office, Barack Obama: writer Brandon Southward wrote, “Congratulations America, you did it.”

Since then, The Barometer has reported on other world-changing events such as Occupy Wall Street (which triggered an Occupy-OSU event), the Umpqua Community College attack and other mass shootings, the 2016 and 2020 presidential elections and, of course, COVID-19, on top of covering local campus—and as of 2020—city news.

Undoubtedly, the student newspaper has grown and changed over the years.

Kami Hammerschmith, who was the assistant director of student media from 1995 to 2016, said that though the way The Barometer produces and publishes content has changed, the core of the paper has not.

“The printed paper has gone from daily, to weekly, to monthly,” Hammerschmith said. “What hasn’t changed is the valuable learning experience for students, from writers to editors, photographers to graphic design, advertising sales to marketing.”

Hammerschmith continued, “The Barometer has always been a student publication. Students decide on the content and produce the content. This has not changed over 125 years.”

Steve Clark, who is currently the OSU vice president of University Relations and Marketing, attended OSU and has journalistic roots in The Barometer. After helping launch a new newspaper for the university’s residence halls, called The Resident, in the winter of 1972 as a freshman, Clark joined the Barometer team in the spring of 1972 as a reporter covering general assignment stories and breaking news, and his junior year, he became editor-in-chief.

Clark said The Barometer is reflecting changes occurring with the journalism industry.

“Over the last 50 years, journalism has changed a great deal through distribution methods of information, including technology associated with the web, the advent of immediate ongoing television reporting by cable news networks and in the last decade or more, the prevalence of social media as a tool of communication,” Clark explained.

Changes in how news is reported has affected OSU significantly and even severely in some cases according to Clark. Student media used to be what the university community relied on for their news, and now, with more vehicles of distribution, people’s dependency on The Barometer as a source has diminished over time.

The decline of reliance on The Barometer, Clark said, is a problem, because local information is a necessity and serves readers.

“Local is essential,” Clark said. “Local information helps shape people’s decisions in their daily lives, it helps inform them about what to engage in or support or oppose, it helps provide information regarding choices that a community, an institution, a university, a city or a state may make through elective leadership. Without local information, there is a void.”

When looking at the history of the student newspaper, Clark said he hopes that current Barometer staff can understand the importance of their predecessors and how they paved the way for the modern Barometer.

“What we do today is not brand new,” Clark said. “And I think going through past editions of The Barometer would serve to inform and help guide how good reporting and good editing and mistakes in reporting and editing can be learned from.”

“When current Barometer staff look at past issues of the newspaper, I expect they might learn that their predecessors faced challenges similar to theirs—meeting deadlines, balancing classwork with newspaper responsibilities, technical or production issues, etc.,” Nielsen said via email. “And that they also shared similar joys—seeing their words ‘in print,’ investigating an issue and sharing what they learned with campus, etc.”

General students, Nielsen added, can see OSU through the eyes of previous students when learning about the history of the Barometer.

Nielsen is currently working with several colleagues at SCARC to digitalize previous issues of The Barometer to keep the history of the publication alive.

“A publication like the Barometer documents what it was like to be a student at Oregon State from 1896 to the present,” Nielsen said about the importance of this project. “It provides a snapshot of daily campus life in the voice of students.”

Looking to the future, Clark said he hopes the pandemic will end soon and allow the community to come back to campus. Additionally, he hopes that an economic model which includes incidental fee and advertising support can be achieved to help the employment of more student journalists and the distribution of more information, whether through print or online.

An Oct. 6, 1906 editorial reads, “Within the breasts of our students there should burn a never-dying spirit for the cause of our institution.”

As The Barometer staff and readers continue into an uncertain future, it’s necessary to learn and gain an understanding of the past.

Over 125 years, the student newspaper has endured two world wars, a Great Depression, civil unrest, violent attacks, historic elections and a Great Recession. It currently faces a global pandemic, a fight for racial equity and an imminent environmental crisis. It will survive much more, with that never-dying spirit.

This article is a part of a collaboration with The Corvallis Advocate and LBCC’s The Commuter that highlights the histories of local news outlets.