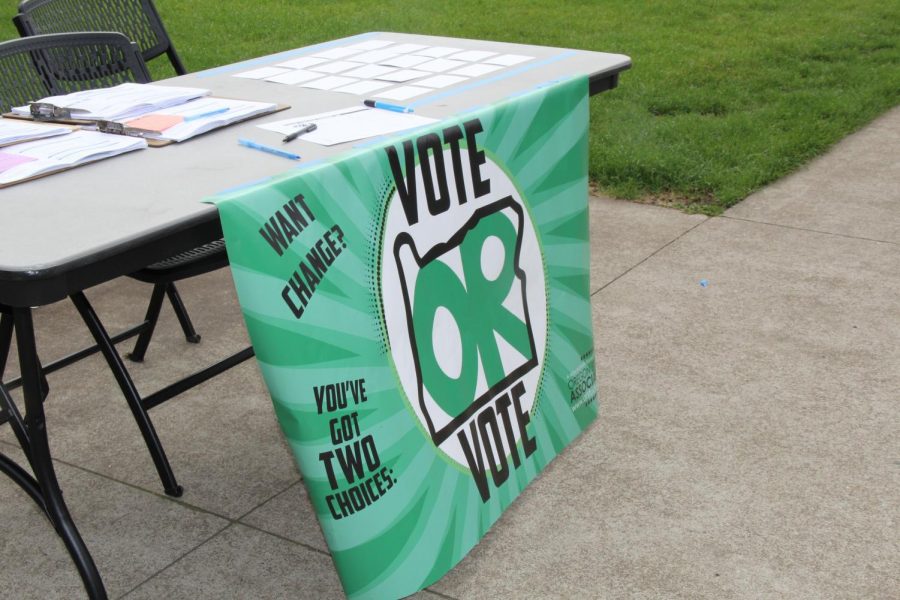 Through tabling in the quad and giving class visits, the ASOSU prompted Vote or Vote campaign encourages students to register to vote.

With the Oct. 18 deadline for voter registration rapidly approaching, The Associated Students of Oregon State University is taking every opportunity to encourage Beavers to register to vote.Students may see representatives of ASOSU give class visits with voter registration cards, manning a registration table in the quad or busily working on election events in the ASOSU office.

Executive Director of Government Regulations Candalynn Johnson is spearheading ASOSU’s commitment to encourage students to exercise their right through the Vote or Vote campaign.

“Voter registration is really important,” Johnson explains. “There two kinds of ways to get a legislator’s attention. There’s money, and then there’s votes. Students don’t have a lot of money, but what we do have is power in numbers.”These numbers add up quickly when trying to bring attention to student issues. However, achieving the numbers to make them a priority to legislation can prove difficult. According to the United States Census Bureau, the 18 to 24 age demographic has consistently had the lowest voter rate, with 2012 showing at only 38 percent. “When legislators think about students, they think of the age group 18 to 24, which demographically, don’t show up to the polls like other demographics. This is really harmful when we go up to the capitol to say ‘Why aren’t student issues being considered?’ and see that they are not prioritizing our issues because we are not showing up and voting,” Johnson said. More recently, ASOSU had the most successful voter registration drive yet. In 2014, over 55,000 students registered to vote across the state.

Hoping for a similar success this year, the Vote or Vote campaign will hosting multiple events including a student panel debate on ballot measures Oct. 24 at 3 p.m. in Memorial Union 208.

Sharing in ASOSU’s excitement, eighteen-year-old biology freshman, Clair Ciabattari, highlights that she has looked forward to registering as soon as she could. “I registered at orientation,” Ciabattari said. “I’ve always wanted to vote and be a part of society and contribute to who will be running our country and who will be representing me.”As the election season surges forward however, many students have lost this excitement as they have lost faith in the current candidates.Chemical engineering sophomore, Brendan O’Neill, contrasts the urgency with compromised resolution in using his voting right. “A lot of people have issues with the two candidates running, like how untrustworthy both of them are,” O’Neill said. “But, registering gives me chance to support third parties. That’s why I’m voting. Traditionally, I’m conservative, but I don’t want to vote for either.” In response to the apathy many young voters have historically shown for the election system, ASOSU is trying to bring clarity to the commonly misunderstood concept that the importance of student voting registration extends beyond the individual ability to contribute to the presidential election and has an impact much closer to home and campus, according to Johnson. “We [ASOSU] are nonpartisan and we understand this election is contentious, but that doesn’t mean you shouldn’t vote or participate,” Johnson said. Decisions are being made by state legislation, city council and county commissioners that affect students deeply, including issues like housing affordability to higher education funding.

Seeing voting more as a privilege versus an obligation, Johnson encourages students with her own voting convictions.

“Voting is a type of way to serve your community. It’s a way to utilize your voice and express your concerns. To me it’s just all about serving my community in any way I can,” Johnson said.