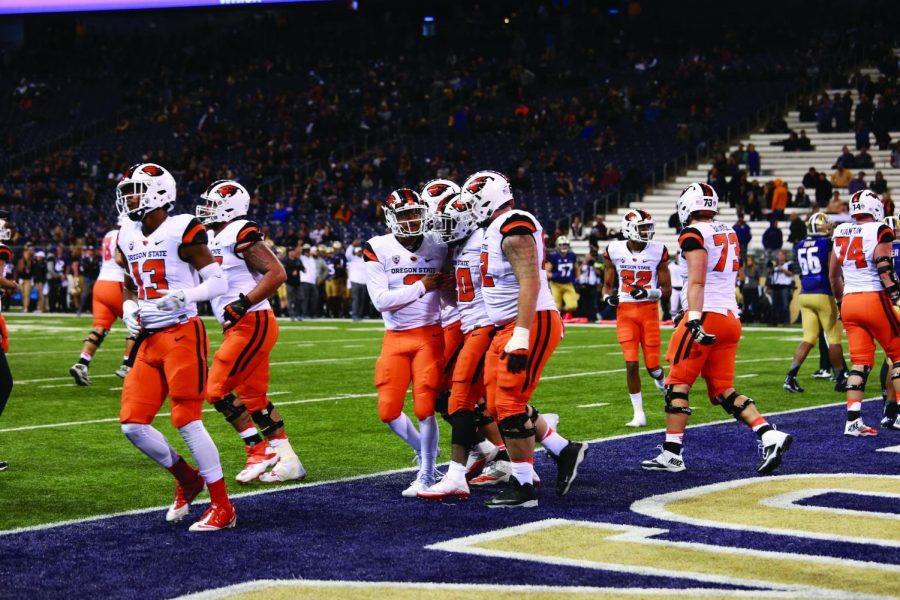 Coming off of a 17-point performance against the No. 5 Washington Huskies, Oregon State is looking to build and improve on the positives aspects of their performance.

Last week against the Huskies, the Beavers were able to overachieve expectations, losing by less than the projected spread of 36.5 points. Oregon State on offense produced 148 passing yards and 177 rushing yards against UW.

Sophomore quarterback Marcus McMaryion received his first start of the season against the Huskies. Following the game, McMaryion was especially self-critical of his performance. At practice on Tuesday, McMaryion was back in action, completing pass after pass to his receivers.

“I know I was hard on myself in the post-game interview,” said McMaryion. “I’m a competitor, all of us are and we hold ourselves to high standards. I beat myself up on the stuff we missed, but there is a lot to build on going into this week.”

Saturday’s game will mark McMaryion’s first time that he will be starting back-to-back games in a Beaver uniform. For the second week in a row, McMaryion has had the opportunity to take first-team reps during practice, allowing him to work on timing with receivers, as well continue to build chemistry with his team.

When asked to assess his team’s performance against UW, McMaryion gave an interesting insight into when he thought his team-best functions together.

“As the game went on our offense had some sparks,” McMaryion said. “When we worry about execution and taking care of our jobs when everyone does their job, that is when we’ve shown flashes of being great even against a great defense like Washington.”

Co-offensive coordinator Kevin McGiven talked on Tuesday about the impact that McMaryion brings to the team, specifically the offense.

“Marcus has a great demeanor and I know the team likes him a lot,” said McGiven. “He ends up filling that role (of quarterback), and I don’t think anyone on the team even bats an eye when Marcus is in there. They know what he represents on and off the field.”

Washington State is a team that many look at because of their offensive firepower, both at the quarterback position, as well as depth at running back. An underrated component of this team is their run defense.

Currently, Washington State is holding its opponents to 105.7 yards per game, second-best in the Pac-12, only behind Arizona State. With playmakers sprinkled throughout their defense, opponents have found it difficult getting into an offensive rhythm.

McGiven also talked about how he sees the team improving on a week to week basis.

“Of course we hope the team grows as the season goes on,” said McGiven. “In the last two weeks, we’ve played top defenses in the league, and they found a way to run the football. I would expect them to be able to do the same this week.”

Currently listed as questionable, Sophomore running back Ryan Nall who sat out of Saturday’s game due to injury, did not practice Tuesday, though was no longer in a boot.

Freshman running back Artavis Pierce, who also missed the game against UW due to injury, was practicing with limited contact.

“I wish I was out there playing, but we did not want it to get worse,” said Pierce. “I understood the decision, and it was next man up for Tim (Cook). Everything feels good today, I was able to make contact, I feel 100 percent.”

With the running back position still in question on who will start, Artavis Pierce is ready to hit the run game early against Washington State.

Oregon State will host the Cougars this Saturday at Reser Stadium on military appreciation night. This weekend also marks homecoming for  Oregon State students. Quarterback Marcus McMaryion is expecting a large crowd to help fuel his confidence, as well as set high expectations going forward for the fans to fulfill.

“Beaver nation has been great to me,” said McMaryion. They supported me before and after the game, which is a great feeling, to know that we have the most loyal fans in the country without a doubt.”